Despite quarterback Davis Cheek’s career day, Elon’s comeback is too little too late 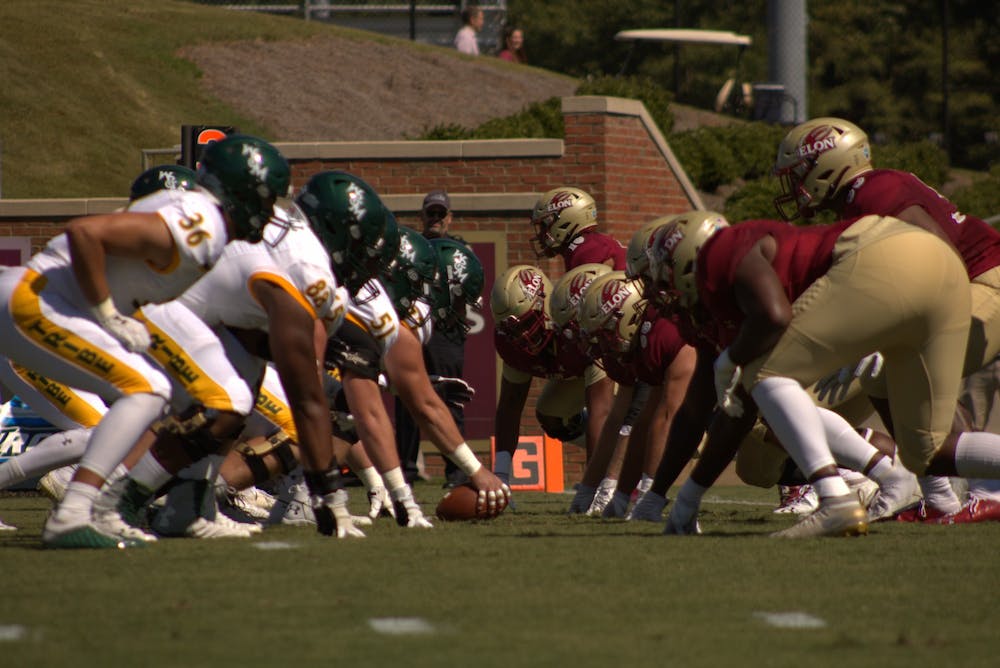 At a sold out Rhodes Stadium on Parents Weekend, Elon’s football team opened up their Colonial Athletic Association schedule with a fight to the finish against conference rival William & Mary.

Despite totaling a whopping 480 yards of offense and senior quarterback Davis Cheek’s career high 384 passing yards, the Phoenix couldn’t pull off the victory at home, falling to the Tribe 34-31.

“The only stat I care about is a win, that's it and that's all,” Cheek said.

The Phoenix fell behind 21-0 early in the second quarter and trailed 27-14 in the fourth, but rallied back with 17 points in the final frame. However, Elon’s comeback fell just short, as the team’s offense failed to score on a final desperation play.

Junior running back Jaylan Thomas had a dynamic game for the Phoenix, tallying 143 all purpose yards on 17 rushes and eight catches alongside two touchdowns. Junior receiver Jackson Parham had a career high 10 catches, while receivers Kortez Weeks and Bryson Daughtry both hauled in touchdown passes from Cheek.

The Phoenix’s defense did a solid job of challenging the Tribe in the air, coming away with two interceptions. One of the brightest stars on the defense was junior defensive back Cole Coleman who had a blocked punt, forced fumble and one of two Phoenix interceptions.

While the Phoenix showed promise in these defensive efforts, the Tribe still managed to come away with three passing touchdowns and two rushing touchdowns. William & Mary quarterback Darius Wilson threw for two touchdown passes in addition to 95 rushing yards and a rushing touchdown.

Defensive consistency is something that the Phoenix struggled with, as despite coming away with three turnovers, Elon played catch up to William & Mary’s dynamic rushing offense.

Another issue that plagued the Phoenix was penalties. The team committed 10 fouls for a total of 97 yards.

“We committed the wrong penalties at the wrong time and we need to eliminate some of the penalties we can control, like that late hit,” Head Coach Tony Trisciani said.

The Phoenix are now 1-3 on the season. The team continues its CAA schedule next week with a matchup versus the Richmond Spiders on Oct. 2. Kickoff for the game is set for 2:00 p.m.