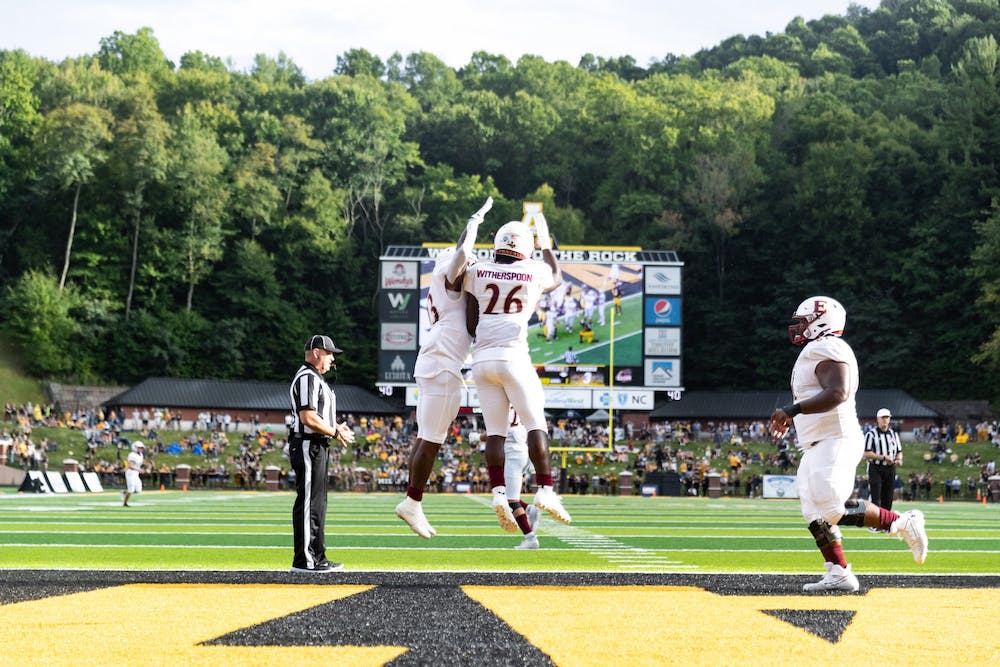 BOONE — For the first time since 2012, Elon University’s football team traveled to a sold-out Kidd Brewer Stadium in Boone for a road game against Appalachian State. Despite a tight first half, the Phoenix fell 44-10 to the Mountaineers.

Elon began the game strong against the Sun Belt conference powerhouse, holding the Mountaineers to just 13 first-half points. However, the Phoenix defense gave up over 520 total yards and four second-half touchdowns, while eight of their 13 offensive drives ended in punts.

Senior quarterback Davis Cheek finished the game 22 for 36 passing with 225 yards and one interception. Cheek was able to find eight different receivers during the game, including junior Jackson Parham, who caught five passes for a team high 83 yards.

“Every game comes down to five or six plays,” Cheek said. “If we change some things, if I make a throw here or make a block there, then the game is completely different. I feel like we were hanging around with them. We were driving the ball well and for me it really comes down to that pick.”

Defensively, Elon was able to record five pass break-ups against the Mountaineers while holding their offense to three of 10 on third down. Junior linebackers Devonte Chandler and Jamir Malone led the way for the Phoenix, each recording eight total tackles. The defense also got support from junior linebacker Marcus Hillman’s two forced fumbles.

“We knew coming into the game that we always want to get takeaways as a defense,” Hillman said. “We just do whatever we can to get the ball back to our offense and we’re always taught, when we go to sack the quarterback, to try to get the ball and come over top. So, I just did what I was coached to do.”

Elon could not find a spark offensively to get some momentum on their side for much of the first-half. However, in the third quarter, Elon’s offense finally started to find its groove.

It all started with an attempted flea-flicker that resulted in a scramble for a one yard gain. On the next play, Cheek hit Parham on a 44 yard strike, the longest play the Phoenix had all game. However, the promising drive came up short when a ball intended for junior Bryson Daughtry in the endzone was thrown behind him and ultimately picked off by Appalachian State senior T.D. Roof.

In the final minute of the quarter, the Phoenix bounced back and finally found the endzone, capping off a six play, 37 yard drive with a McKinley Witherspoon touchdown, closing the deficit to 27-10.

However, Appalachian State dominated the fourth quarter, as the Mountaineers put up 17 unanswered points to close out the win.

With the loss, Elon falls to 9-33-1 all-time against Appalachian State. The Phoenix have not defeated the Mountaineers since 1964.

“I expect us to build off our performance from the first-half today,” Head Coach Tony Trisciani said. “We’re going to prepare for next week the same way we prepared for the last three weeks. We’re not going to change anything we do from a preparation standpoint. I do expect us to grow as a football team.”

The Phoenix (1-2) return home next weekend to take on William & Mary during Family Weekend for their first Colonial Athletic Conference game of the season. Kickoff is set for 2:00 p.m.