New student orientation to be in-person, some virtual sections 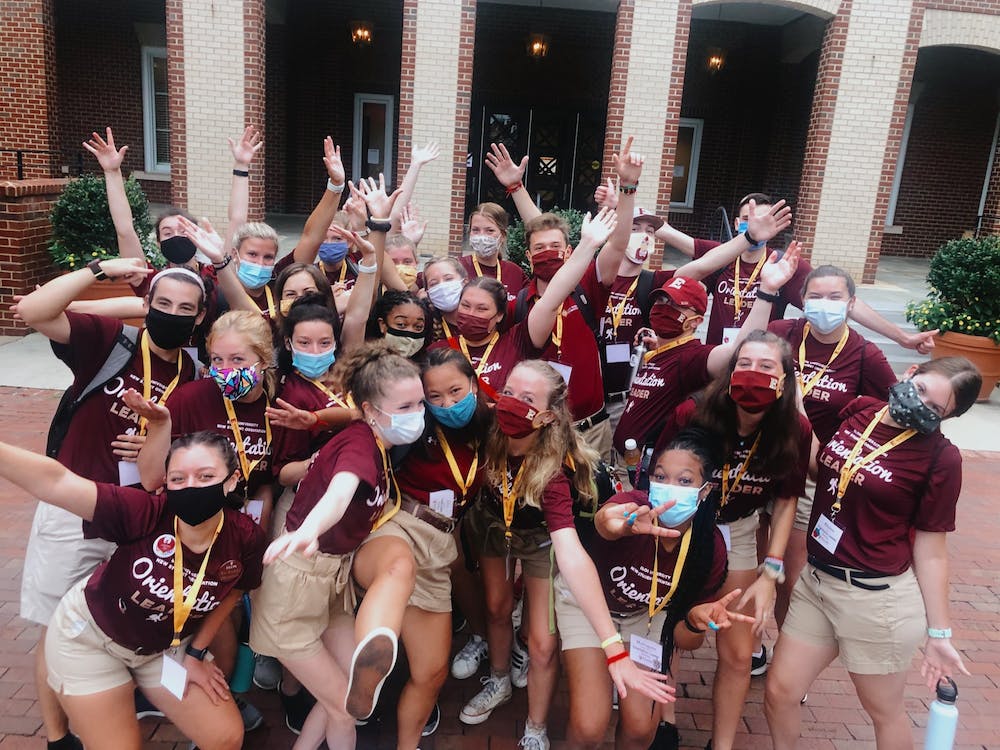 Last year’s new student orientation was filled with online sessions and virtual activities. The class of 2025 and transfer students will experience orientation in person, masked and with some virtual programming. Courtesy of Mahogany Madden-Roberts.

The moment after each New Student Orientation ends, Director of New Student and Transitions Programs Emily Krechel and her team are already planning for the next one. But after the 2020-21 school year, Krechel was unsure of what would be in store for the class of 2025’s arrival.

Krechel did know one thing: 2020’s virtual orientation wasn’t fully going away. In accordance with the university’s vaccine requirement and return to in-person learning, Elon’s orientation program will be in person, with some group sessions online from pre- recorded lectures.

From attending the pep rally to engaging in group meetings, new students will get a glimpse of an orientation schedule filled with activities similar to 2020 and previous years. Krechel said these annual university events will remind everyone what Elon strives for.

“The hallmark of Elon is that in-person engagement and connection, that small tight- knit community, that’s what Elon is about,” Krechel said. “We want to get back to that and the science supports that. In bringing students who are vaccinated back together, how we handled the pandemic in 2020 shows that we can do this.”

In the past, Krechel had a confirmed schedule of what orientation would look like — from the first move-in time to the last meeting with orientation leaders — by early spring. But planning this year’s orientation was delayed far more than she anticipated.

“Things changed a lot in 2020. This year, one of the challenges was we didn’t know what was going to happen with the pandemic,” Krechel said. “In the past I wanted a confirmed schedule by March. I wasn’t confident in our schedule until June.”

“The thing that sets us apart is that we really try to emphasize that community sense,” Madden-Roberts said “I had a great experience during my orientation coming into Elon, so I wanted to be able to do that for someone else.”

Madden-Roberts also hopes that her continued presence with the new student programs will allow minority students to relate to her.

“I wanted to be a person who is able to identify more with the minority students as well, especially when you’re not used to going to a school with so many people that are within the majority,” Madden-Roberts said.

In-person orientation may be one of the first larger group engagements since the pandemic began for some students. It’s been over a year since freshman Morgan Williams interacted with any school members in person. The return of in-person classes and orientation will be a fresh start for her.

“I spent all of senior year [of high school] on a computer. There was an option to be in- person, but that was before I could get a vaccine,” Williams said. “I missed the classroom, so I’m excited to be in person.”

For freshman Eddie Keefe, the hybrid interactions with students and teachers during his senior year of high school pushed him to be more excited for his transition to Elon.

“I feel like it’s a privilege for me to start off almost normal again,” Keefe said. “It’s like going to kindergarten. These are the friends you’re going to have for the next four years. These people do not know one thing about you, so it’s like starting all over and branching out.”

The return of gathering in-person on Young Commons to meet orientation groups and sitting Under the Oaks for New Student Convocation is what Krechel hopes new students fully experience as one of their first memories of Elon, especially after last year’s virtual orientation.

“We start building that community day one of orientation and that tracks with them the entire semester ... The shared experiences are uniquely at Elon,” Krechel said. “We knew in 2019, even before the pandemic, that we wanted to make this more personal for new students. 2020 helped us figure out how to do that well.”