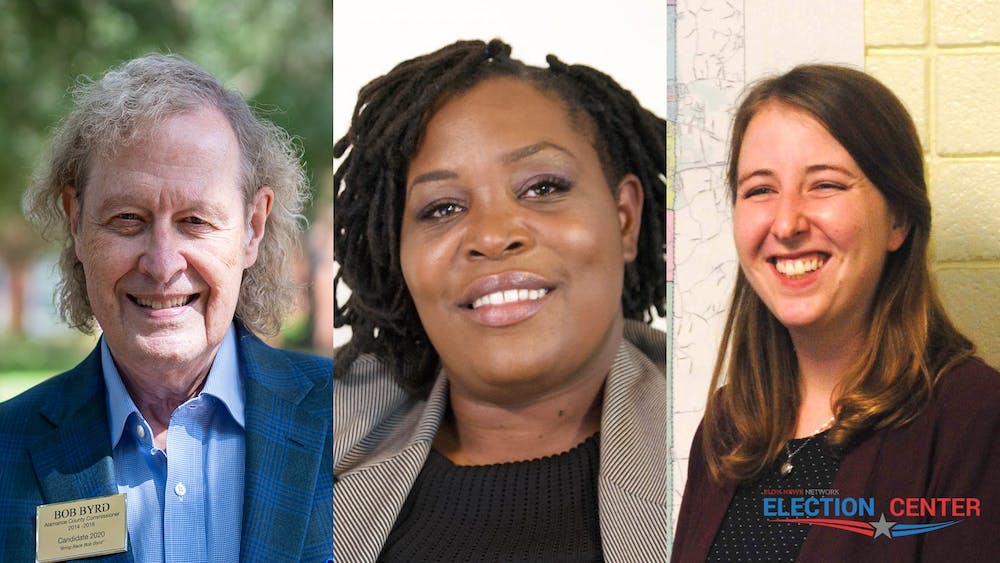 There are three candidates running as Democrats for a seat on the Alamance County Board of Commissioners: Bob Byrd, Dreama Caldwell and Kristen Powers. They are vying for the three open seats on the board against three Republicans.

Democrats Bob Byrd, Dreama Caldwell and Kristen Powers will battle three Republican candidates in the November general election for three open seats on the Alamance County Board of Commissioners.

This year’s election features three Democratic and three Republican candidates. The three candidates with the most votes will each receive a seat on the board.

Partisan primary elections were held in March. Among the five Democratic contenders, the three with the most votes moved on to the general election. In the Democratic primary, Powers received 27.08% of the votes, followed by Byrd with 25.72% and Caldwell with 18.15%.

They will now fight to fill three vacancies left by three retiring board members, all of whom are Republicans.

“I have known a lot of commissioners and other politicians. I never thought I'd ever want to be a politician or an elected official until then,” Byrd said. “I realized if I became a county commissioner, I could make a difference for our schools, and our teachers, and our kids.”

Byrd — a former healthcare executive — worked at Alamance Regional Medical Center for 35 years, where he was a member of the senior executive team and served as senior vice president. In his career, Byrd said he built many relationships, and hopes to utilize relationships and his ability to connect with people when serving Alamance county.

“Sometimes we as elected officials or candidates think we have solutions to everything,” Byrd said. “You solve problems by talking and listening and working together and building bridges … I have so many relationships built in this community to begin with. I want to leverage those relationships, sit down, have really meaningful conversations and do some problem-solving.”

Working together is critical, and what Byrd feels county commissioners and the board of education need to do to improve ABSS. Byrd said both bodies need to work like teammates, holding one another accountable to better invest in the school system.

“We need to have trust and understand the issues, and we need to have that common goal of educating our kids … That's necessary to move forward,” Byrd said.

As a county commissioner, Byrd was part of bringing the Stepping Up initiative to Alamance county. The initiative’s mission is to reduce the number of people who experience mental illness and substance abuse in the criminal justice system. To prevent people who experience mental illness from being incarcerated, the initiative connects them to services they may not have received or had access to in police custody or in a hospital emergency room, Byrd said.

Byrd said bringing the Stepping Up initiative to Alamance County is something he is “extremely proud of.”

Making sure police officers are trained in crisis intervention training and the creation of a diversion center, staffed with mental health professionals where individuals can be assessed and connected to resources, are two components of The Stepping Up Initiative.

“This matter isn't just about people with mental illness. It's about everybody,” Byrd said.

Byrd said in addition to making sure people experiencing mental illness or dealing with substance abuse are not incarcerated, he also supports bail reform.

During his tenure as commissioner previously, Byrd said the issue of the confederate monument in front of the Graham courthouse was “contentious.” Byrd said he is in favor of moving the monument to a “more appropriate” location, such as a museum or a cemetery. The monument was erected in 1914, and served as another way to “oppress the Black community” in Alamance County. That context should be provided wherever the monument is relocated to, Byrd said.

“It should not be a symbol of celebration,” Byrd said. “In my view, it’s that we never want to forget the Confederacy and the atrocities associated with the Confederacy.”

Making sure the Alamance-Burlington School System is fully and equitably funded is not just a goal for Dreama Caldwell’s campaign — it’s personal for the Alamance County native, who was educated in ABSS.

“To run for county commissioner, it kind of confirmed a dream I had very young that I could be a lawyer or a politician,” Caldwell said. “I had some teachers who snuffed out that dream very early, and self-doubt began to creep in that it wasn’t something I could do. But here I am.”

Growing up and remaining in Alamance County throughout her adult life, Caldwell has been part of community organizations which allowed her to connect with residents. Caldwell said the county commissioners often didn’t reflect her “lived-in experience” or the experiences of the people she met in the community — which is one of the reasons she decided to run.

“I’ve been in public housing, I’m a public high school graduate, public community graduate and fought this cycle of poverty,” Caldwell said. “I just didn't feel like they had been down my journey and there wasn't anyone that represented my journey.”

Caldwell spent 25 years working with children as a day care manager. Fully funding schools and making sure every child has access to facilities of equal quality are critical, Caldwell said. ABSS school budget requests have a history of not being fully funded, a decision made by county commissioners.

“You're only as strong as your youth,” Caldwell said. “Because eventually, your county commissioners will age out eventually, and if you're not treating your youth right from the very beginning, then it presents problems later on in time.”

Caldwell also advocates for the relocation of the Confederate statue in Graham. The 30-foot Confederate monument stands in front of the courthouse in Graham, and its presence has been the subject of protests throughout the summer. Despite Elon local officials, community members and Elon University calling on the Alamance county commissioners for its relocation, the statue remains.

“What I'm opposed to is spending that money and not spending it responsibly,” Caldwell said. “If we're having these large tax increases and adding to different budgets that don't benefit people, really, we need to look at that.”

While closing businesses reduced hours for many community members — including Caldwell, who works in hospitality — she said Governor Roy Cooper has a hard job regardless of what he decided for North Carolina.

“I think no matter what you do, some people are not going to be upset,” Caldwell said.

Caldwell said when it comes to cash bail reform, an issue she advocates on behalf of, using assessment tools to determine if a person facing time in jail is dangerous or unable to afford bail is important, especially with poverty within the county. As someone who has been through the justice system, Caldwell understands the economic barrier facing many incarcerated people.

“We do have to face the reality that in Alamance County, our poverty level does exist, it may not be a large population, but it does. And within that, it creates other issues,” Caldwell said.

Kristen Powers ran for county commissioner in 2018 and lost to an incumbent. But Powers said she still saw a need for a lot of changes on the Board of Commissioners — which is why she is running again as one of the three Democratic candidates in the 2020 race.

“This year, it's an unprecedented opportunity with three open seats on the commissioners,” Powers said. “To have three is a majority of people that are really passionate ... that can make a difference.”

The first time she ran, Powers said she focused her platform on issues she found and saw within Alamance County. This time, Powers is campaigning on the issues of the community. Last fall, Powers surveyed over 300 community members, and the issues on her platform reflect the results of the survey.

“We really made sure to focus that on our platform this year, to really reflect what we were actually hearing from community members,” Powers said.

Powers said one of the bigger issues according to the survey is education, particularly the state of school buildings. With students participating mainly in remote learning, Powers said there is opportunity to renovate buildings without students inside the classroom, but inequity in education and childcare have come to light with remote learning.

“I do think renovating and fixing school buildings right now prepares us for the future when we are able to go back to school buildings,” Powers said. “But I think also the inequity we're seeing in virtual learning is a challenge, and actually points out larger issues like child care or the fact that people may have certain benefits of their jobs that allows them to work from home or be flexible.”

In addition to education, Powers said the survey also indicated that citizens are concerned about racism and discrimination. The survey was conducted in fall 2019, which Powers said is a reminder that this is not a new issue for Alamance County.

“It's been a problem for a long time — we know that — but I think in Alamance County … certain people didn't want to talk about it,” Powers said. “But what we're really seeing is people want their candidates and their elected officials to engage in this topic and to not pretend like it's no longer an issue.”

Powers said a shortcoming surrounding the Confederate monument in Graham — which has been the subject of protests throughout the summer — has been a “lack of open listening” by commissioners. While the commissioners may not be able to make as much change as community members would like, Powers said commissioners need to listen, and be as transparent as possible.

As North Carolina continues to reopen, Powers said the least elected officials can do is publicly follow public health guidelines, especially when citizens feel like they are receiving conflicted messaging.

“As long as we're continuing to strictly follow what the public health guidelines are, we can send a consistent message about how we're able to keep each other safe.

As the interim director of Benevolence Farms and the co-founder of the Alamance county Bail Fund, Powers has seen firsthand what impact the justice system can have on people, and why bail reform in Alamance County is necessary.

“It’s really an equity issue about criminalization of the poor,” Powers said. “And that’s something in Alamance county that is more of a local issue.”