At the monthly regular session, the Board of Aldermen discuss budget ordinance, award the Order of the Long Leaf Pine Award 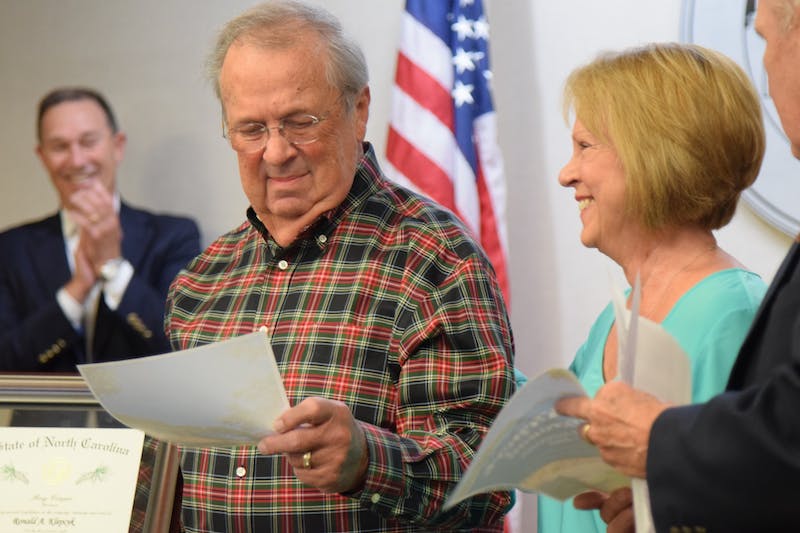 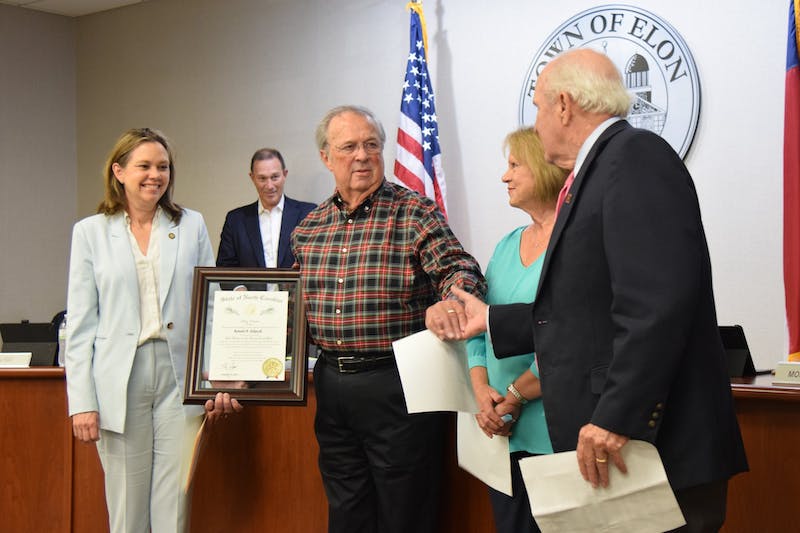 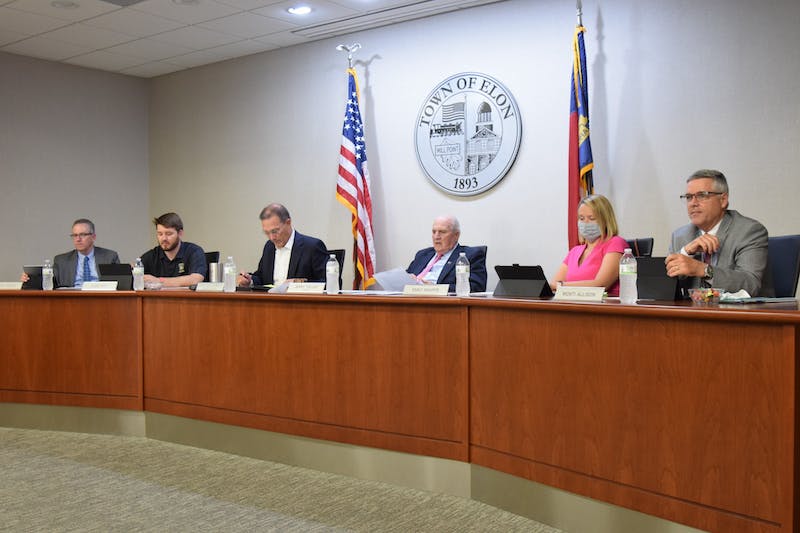 After 38 years of service to the town of Elon, Mayor Jerry Tolley announced at the Board of Aldermen regular session on June 15 that he will not seek reelection in November. The board also awarded former board member Ron Klepcyk the Order of the Long Leaf Pine and discussed the budget for the upcoming fiscal year, including additional funding the town expects to receive from the American Rescue Plan Act Fund.

Tolley will not seek reelection

Tolley told board members that he would not run again for mayor in the fall. After serving as an alderman from 1983 to 1989, Tolley served his first term as mayor in 1989. He was mayor for eight years, and was then reelected to the position in 2005.

“This is an amazing place to be mayor, an amazing town, and I look forward to many years being here,” Tolley said.

Klepcyk served the town of Elon for nearly 20 years, and was announced a recipient of  the Order of the Long Leaf Pine award. The award is one of the most prestigious awards presented by the governor of North Carolina, and is given to those who show exemplary service to their community. Other recipients of the award include Maya Angelou and Coretta Scott King.

Senator Amy Galey presented the award to Klepcyk, who was surprised by many of his friends and family members at the meeting. Tolley also announced that the playground at Beth Schmidt Park, a committee both he and Klepcyk served on, will be named after Klepcyk.

“I'm a strong believer in public service,” Klepcyk said, after receiving the award.

The Board of Aldermen adopted a budget ordinance to set up a revenue fund for the estimated $3.5 million the town of Elon is expected to receive. The funding is from the American Rescue Plan Act Fund, which was passed in March and includes $1.9 trillion for COVID-19 relief funding and economic recovery nationally. The state of North Carolina received $1.3 billion of those funds.

According to guidance from the federal government, the funding can be used to provide premium pay to essential workers, provide government service and to make investments in water, sewer and broadband infrastructure.

The board discussed several options for the funding, including increasing broadband services within the town, which is a challenge in Alamance County.

Mayor Pro Tem Davis Montgomery and Alderwoman Emily Sharpe were charged with discussing an outline for an anti-discrimination ordinance after last month’s meeting. Montgomery said he and Sharpe have met with Town Manager Rich Roedner to discuss the issue and decided to start with an “Equality Resolution” as the first step.

“The idea of an ordinance for most of the council members seemed to be a pretty big step,” Montgomery said. “The resolution for Elon is a good first step. It kind of puts us out there and … there's a lot of towns, municipalities in the state that have not even done a resolution, so we're willing to take that first step and be one step ahead of them.”

The resolution will be brought before the board at their next meeting in August.