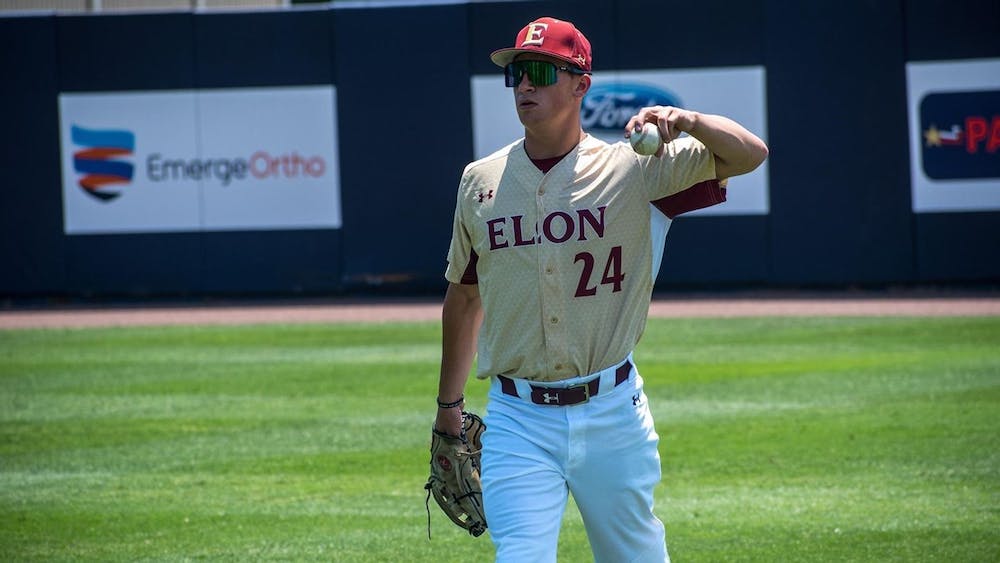 Alex Iadisernia committed to play at Elon University to be a part of a close-knit team and to compete in postseason games. The redshirt freshman outfielder had one of the most prolific freshman seasons in program history, from winning numerous awards to breaking records.

Even though he was distinguished as a recruit, winning individual awards in college was never his expectation.

“When you’re in high school, that’s a goal and it’s something you never think is actually gonna happen,” Iadisernia said. “But once you’re on the field and good things start happening, you start to realize that maybe this can happen.”

Iadisernia was named to the 2021 Collegiate Baseball Freshman All-American team, powered by Diamond Sports, becoming the first Elon player to be named a Freshman All-American since Kyle Brnovich in 2017. He was also named the Colonial Athletic Association Co-Rookie of the Year and was selected to the conference’s All First and Rookie Teams.

Elon baseball head coach Mike Kennedy said he considers Iadisernia a team leader because of how he conducts himself both on and off the field and inspires his teammates to improve.

“He loves to work and when he comes to the field, he wants to get better,” Kennedy said. “He wears off on our other guys the right way on how he carries himself both on and off the field. He leads by example.”

Iadisernia also hit a team-high 10 home runs this season to break Elon’s freshman home run record, previously held by Liam O’Regan ‘19. While Iadisernia said he worked hard to improve his strength over the offseason, he did not believe he would achieve such a milestone.

“I was never really a big home run guy in high school and I didn’t really expect to hit that many home runs,” Iadisernia said. “That came by having a good approach at the plate and working hard every day at practice.”

Kennedy praised Iadisernia’s work ethic at practice, and said his patience and vision at the plate allow him to be a proficient batter.

“He doesn’t chase and he doesn’t swing out of the zone. That’s always a big sign when you are looking at good hitters,” Kennedy said. “He’s very coachable, he listens, and he has a great approach at the plate.”

Starting in all 44 of the team’s games, Iadisernia also led the team with 30 RBI and ranked third in the CAA with a batting average of .368. He had more walks than strikeouts, finishing the season with an on-base percentage of .448 and led the team in runs with 39.

Playing as a ‘redshirt’

Iadisernia played 17 games as a freshman during the 2020 season before the COVID-19 pandemic led to the cancellation of all NCAA spring sports. The NCAA granted all spring athletes an extra year of athletic eligibility by the NCAA because of the cancellation, meaning Iadisernia was able to redshirt and return in 2021 with four years of eligibility.

Gaining experience in 2020 proved pivotal for Iadisernia, as he believes it helped propel him to such a successful season in 2021.

“Being a redshirt freshman helped because I kind of got a taste of college baseball a little bit last year,” Iadisernia said. “I was able to take what I learned last year and worked hard every single day to get better.”

Elon finished the season with a 22-22 record, but with most of the team’s core returning next season, Kennedy is hopeful they can have a breakout campaign in 2022. He believes Iadisernia has the potential to have another great season, although his success this past season will raise new challenges in the future.

“He’s not going to sneak up on anybody next year. Everybody knows about him and he’ll be pitched quite differently potentially,” Kennedy said. “But he’s good at making adjustments and that’s why he’s one of the elite hitters in the CAA and potentially in the country.”