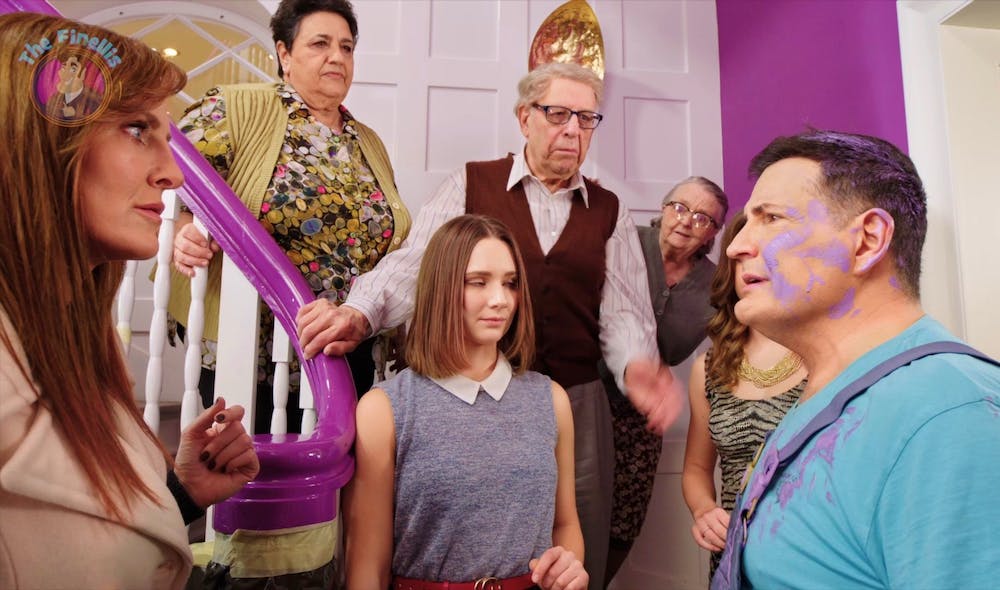 “The Finellis” follows the lives of divorced couple Tony, portrayed by Mark Janicello, and Tina, along with their daughters Lola and Lena. Photo courtesy of Mark Janicello.

Mark Janicello has been on stage since he was four years old. Now 58, he hopes to make people laugh with his latest project, “The Finellis.”

The sitcom, written by and starring Janicello, follows the lives of divorced couple Tony and Tina Finelli and their two daughters, Lola and Lena. The personalities of the characters are based upon people in Janicello’s real life, and the show features live music and animated cartoons.

“People forget their problems when they start to laugh,” Janicello said. “Most peoples’ lives are not terribly happy, and I took all of the problems of my own life, and I’ve made a fictionalized version of it.”

Janicello stars as Tony, the character based on himself, and said he hopes that as Tony learns about his own life in the show, his audience can learn alongside him.

"I believe more in 'The Finellis' than anything I've ever done.My hope is that the story of Tony and the rest of the Finellis will bring hope to people all over the world."

“I believe more in ‘The Finellis’ than anything I’ve ever done,” Janicello said. “My hope is that the story of Tony and the rest of the Finellis will bring hope to people all over the world.”

Janicello, a former Burlington resident and Williams High School graduate, said his career has taken him to more than 40 countries. He has completed many projects in his lifetime: 100 stage productions, more than 90 film projects and over 30 albums.

He said while his family owns Colfax Furniture and Mattress, a home goods store with a presence in the Triad area for more than 50 years, he knew his heart was in entertainment.

After graduating from University of North Carolina at Greensboro in 1984, Janicello moved to New York, and a decade later, he found himself in Europe seeking more opportunities in entertainment.

Janicello has lived in Berlin since 2015, but he has tried to stay involved in the Burlington community in recent years. In 2017, he performed at his “Rock Legends” concert to raise money for the Alamance-Burlington School System’s backpack program.

A gym in Berlin was not the place Janicello thought he would find his next colleague, Marco Bischof, but now, Janicello and his old training partner are co-producing “The Finellis.” When Janicello and Bischof, a former investment banker, met in 2018, they seemed like an unlikely match. But Janicello believes the sitcom would not be where it is today without the help of his new friend.

Together the pair has produced almost four complete episodes, and as of March 31, “The Finellis” has acquired 20 awards from 60 nominations, both in the United States and internationally. Bischof said he is proud to have a role in this project.

“This is much more of a human interest story. It’s something that the wider bandwidth of people can identify with and draw strength from,” Bischof said. “If I can help Mark produce this and put it out to the world, I’ve done something good.”

Bischof said he enjoys the opportunity to collaborate with Janicello and the duo hopes to continue to share their show with a wider audience.

Beaming with pride, Patricia ‘Trish’ Osmond, who portrays Nonna in “The Finellis,” said her character is her favorite on the sitcom.

“I have the best character in the show,” Osmond said. “I sit in the corner and knit, but my head is full of dreams. I absolutely love being Nonna.”

Osmond first met Janicello five years ago at a general audition and said they immediately connected. After seeing a Facebook post for the sitcom a few years later, Osmond said she knew she had to reply.

“Mark said he had been desperately trying to find me,” Osmond said. “He wanted me for the role — there wasn’t a question about anybody else.”

Like Janicello, Osmond believes in the show and its future. However, she said she worries that when the show gets picked up by a distributor, the distributor will want its own cast.

“I’m completely petrified that they’ll decide to bring in their own cast,” Osmond said. “I want to be Nonna. If it means going anywhere in the world, I’ve got my suitcase packed already.”

Osmond said, “The Finellis” encapsulates Janicello’s personality and admiration for the arts, and she believes he and the cast are a family.

Janicello said winning awards for “The Finellis’’ was a validating experience, both for him and his team, and he believes the recognition proves the show’s worthiness to bigger corporations.

In late 2018, Janicello founded and incorporated Marjan Content Productions, which partnered with Buffalo 8 Productions in January 2021 to produce “The Finellis.” The pair hopes to fulfill their goal of reaching a global audience by making a sale with an international streaming service within the next three months.

“Nobody was expecting us, this little company, to get a show that at the end of the day would win all these awards all over the world,” Janicello said. “It is an extraordinary amount of work, and it’s not anything that just happens on its own, but I believed in this. Now we’re about to be able to share this story with the entire world.”