During their bi-weekly anti-racism protest in Graham, demonstrators express need for change nationally and locally 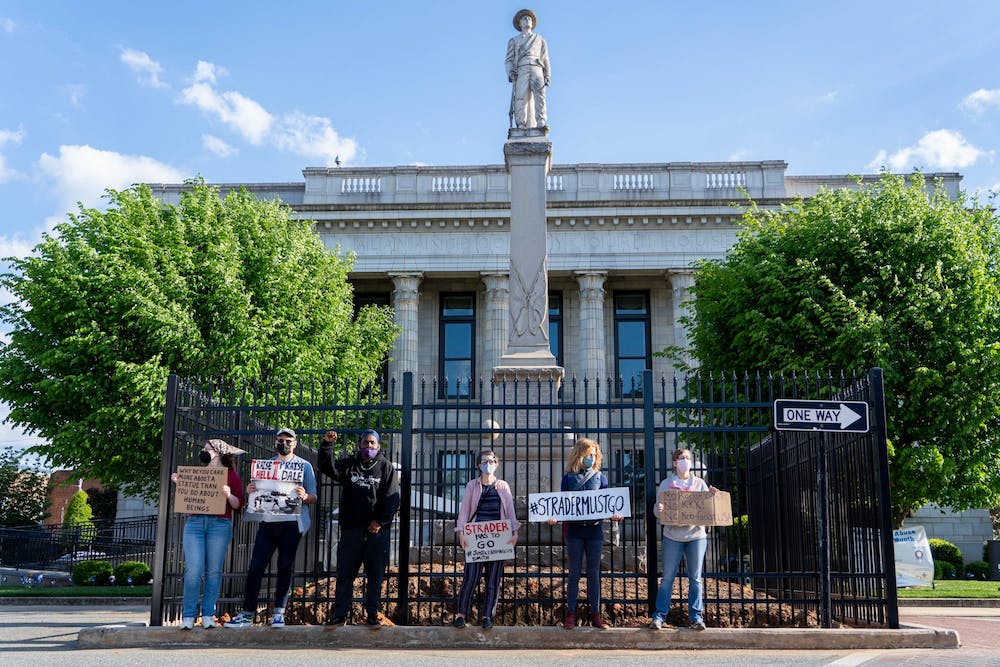 
Kristofer Loy stands with demonstrators in front of the newly constructed 8-foot tall iron fence around the Confederate monument on April 21, 2021, in Graham, North Carolina.

Janet Nesbitt sits in her motorized scooter on the corner of Main Street in downtown Graham, just to the right of the Confederate monument. Nesbitt has sat here before, protesting against police brutality and racism within Alamance County. But today, after hearing the verdict of George Floyd’s murder trial last night, she is demonstrating in honor of what she said is “just the beginning.”

“I've been coming out for a while now, I'm known to the news and everybody as the lady on the motorized scooter who got pepper sprayed,” Nesbitt said. “But you know, I've been harassed within one week by two officers for minding my own business. So there's got to be a change.”

On April 20, former Minneapolis police officer Derek Chauvin was found guilty of three charges in Floyd’s murder: second-degree unintentional murder, third-degree murder and second-degree manslaughter. Chauvin faces up to 40 years in prison, and his sentencing is expected in the next few weeks.

As a mother and grandmother to Black men, Nesbitt said she continues to advocate in Graham and Alamance County for not only herself and the community, but for her family. Occupy Graham demonstrators gathered today in downtown Graham from 5:30 p.m. to 6 p.m., the same place they’ve been meeting every Wednesday and Saturday since the insurrection at the U.S. Capitol on Jan. 6.

“I have no other choice but to be out here and fight to try to get things to changed and make it better for them,” Nesbitt said.

Kristofer Loy stood outside the new, 8-foot tall iron fence surrounding the Confederate monument, which cost the county $32,100, according to building permits. Standing arm to arm with other demonstrators, Loy held a weathered sign that read “Raise hell, praise Dale.” The sign is in reference to Dale Earndhart, a North Carolina native and Nascar driver who was one of the first drivers to oppose the Confederate flag flying above racetracks.

“We like to have a little bit of fun out here in Graham just ‘cause you can't take things way, way too seriously, or you're going to lose your mind,” Loy said. “It's surprising how angry it makes the other side to see Dale Earnhardt, the icon of Nascar, being used as a anti-racist sort of figure.”

Loy, who attends the semiweekly protests in Graham regularly, said the Occupy Graham protests serve as a space for liberal members of the Graham and greater Alamance community. While Loy said Occupy Graham is pleased with the verdict, like Nisbett, he said this is only the beginning.

“We're very glad for the overall meaning that that ruling has for anti-racist movements in this country and internationally, but here in Graham, we still have issues that we need to focus on,” Loy said. “Here in Alamance, it's one of the worst places in the entire country, if you ask me, if you ask a lot of people out here, when it comes to abuse by the police force here, especially the sheriff.”

Occupy Graham will hold a vigil on Saturday, April 24 from 5:30 to 6 p.m. recognizing those killed by police officers.