Residents of Alamance County and Elon University students gathered to march to the polls, but the event was cut short after clashes with law enforcement 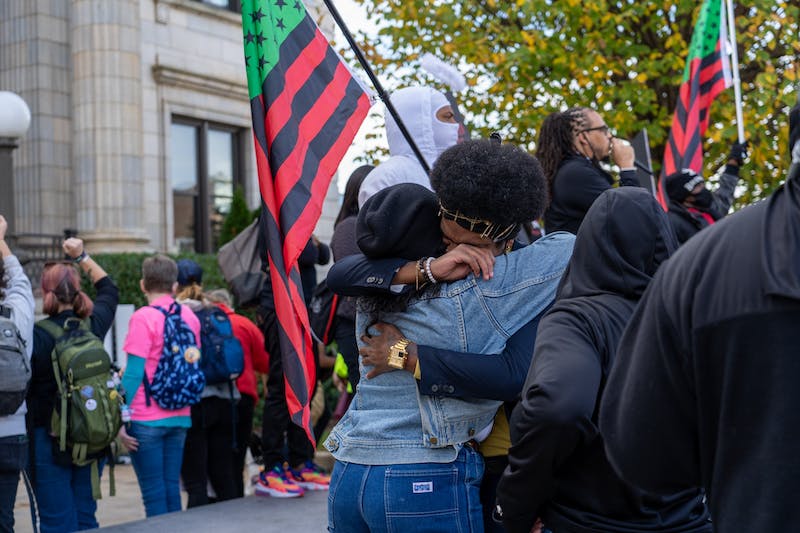 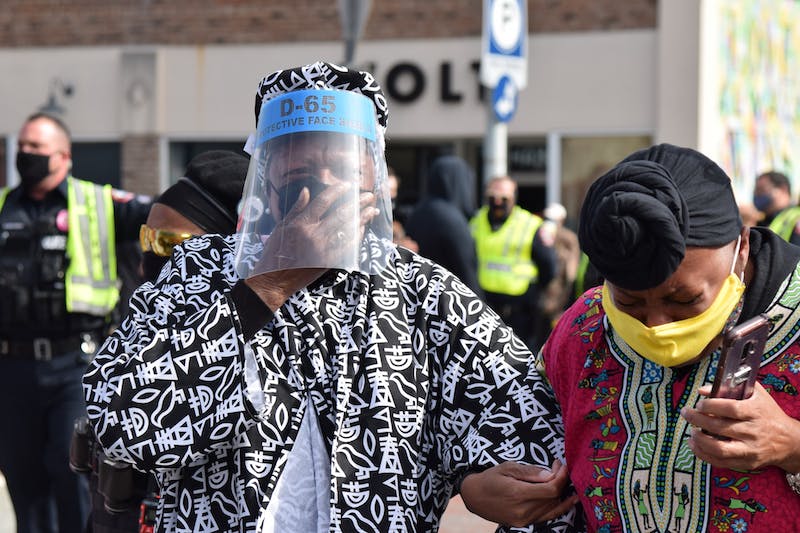 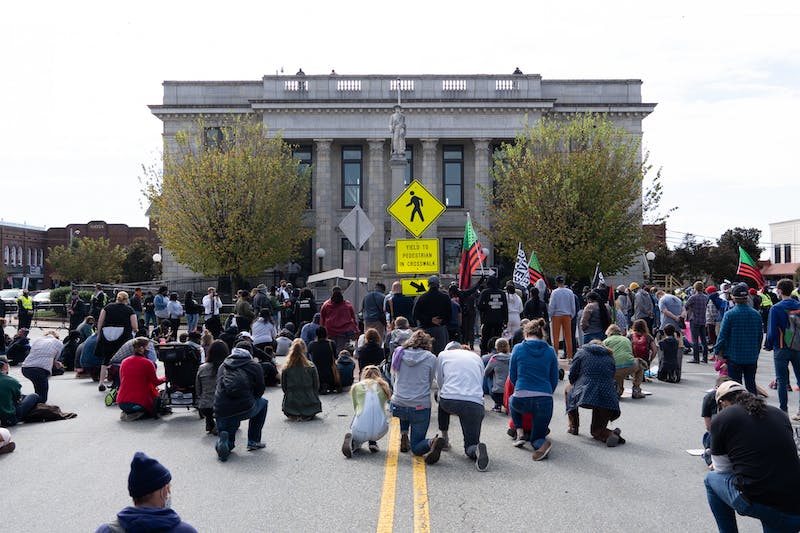 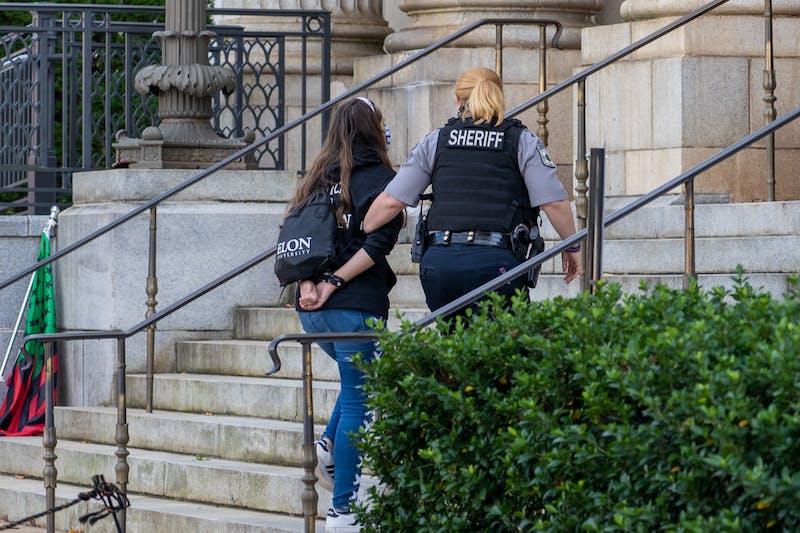 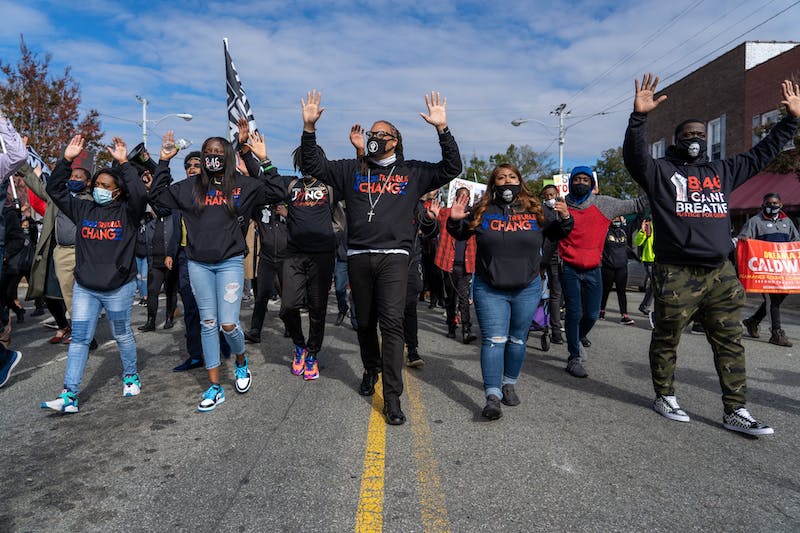 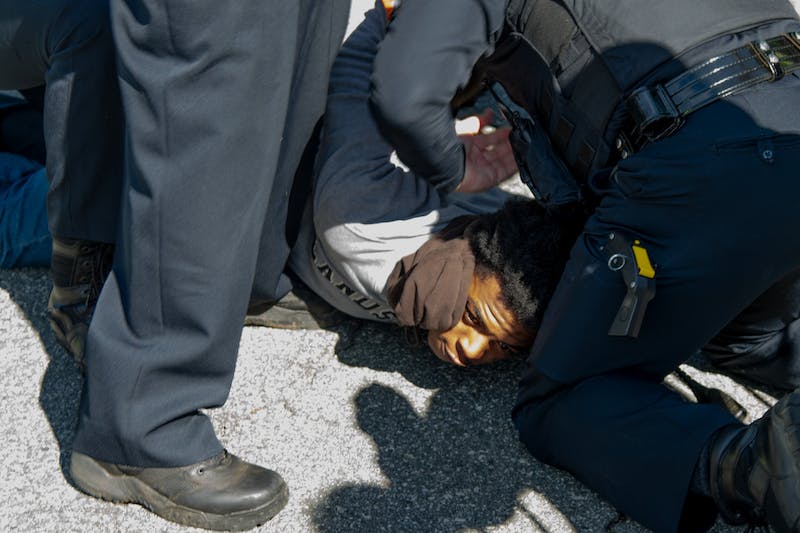 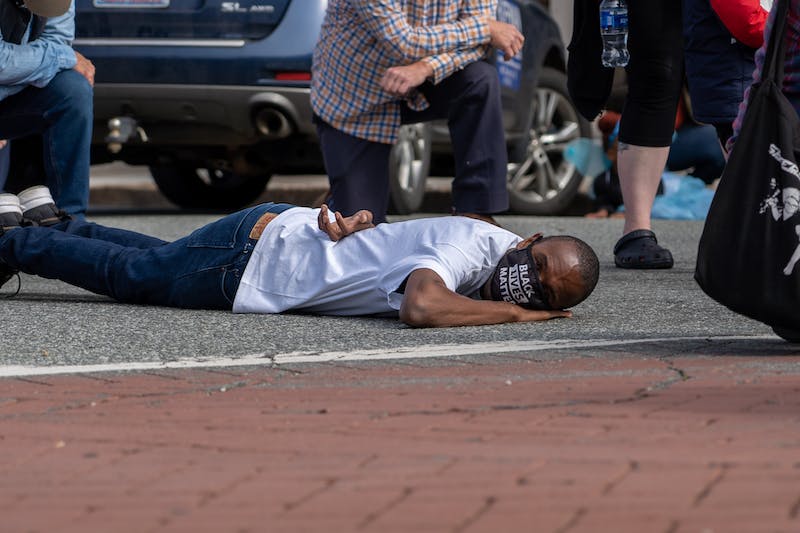 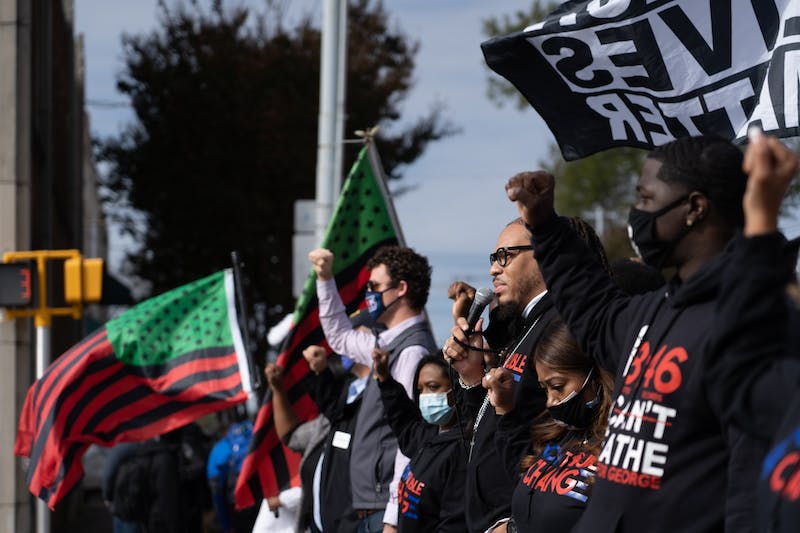 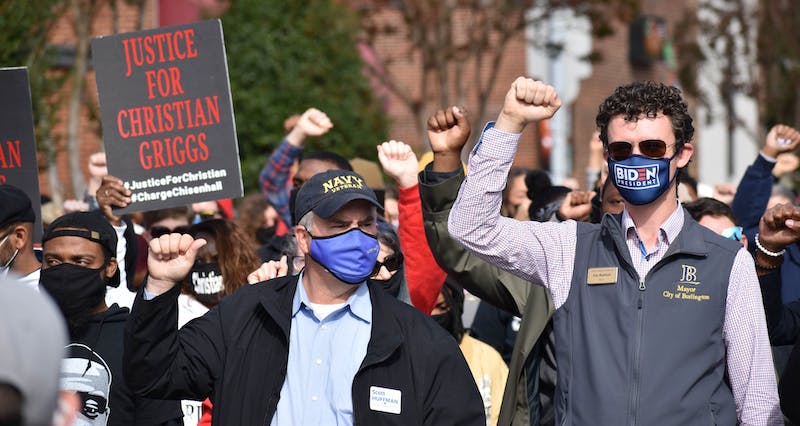 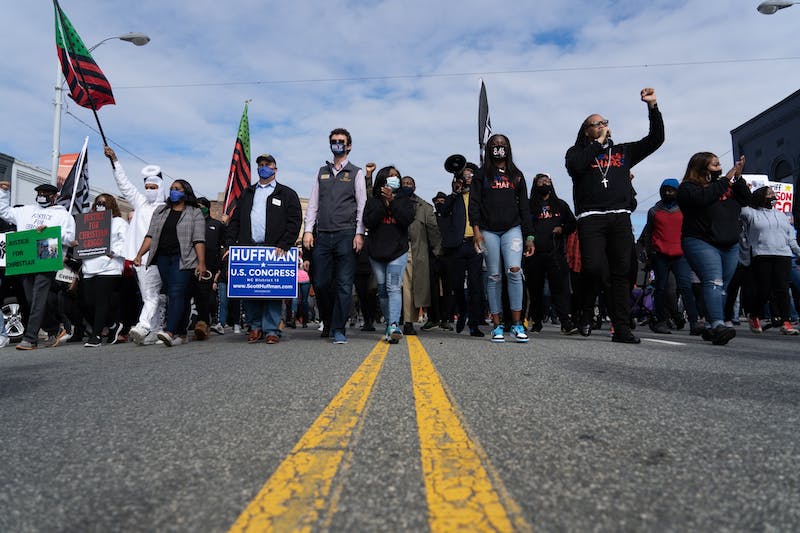 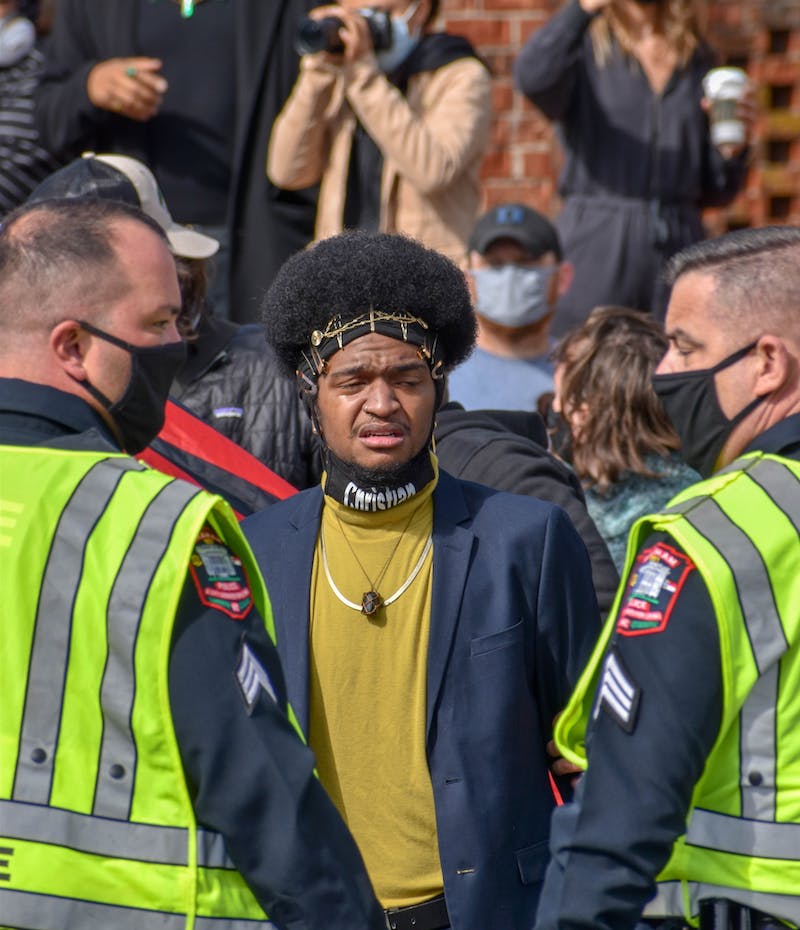 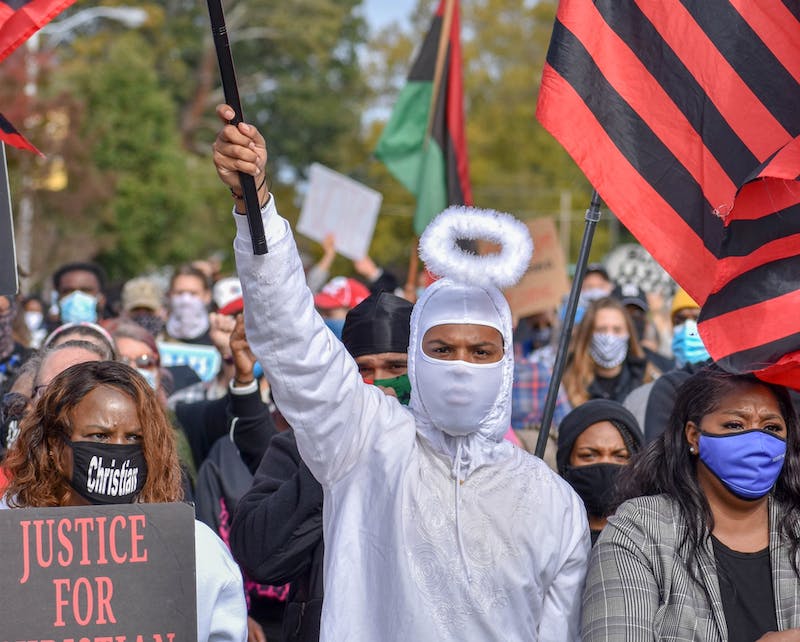 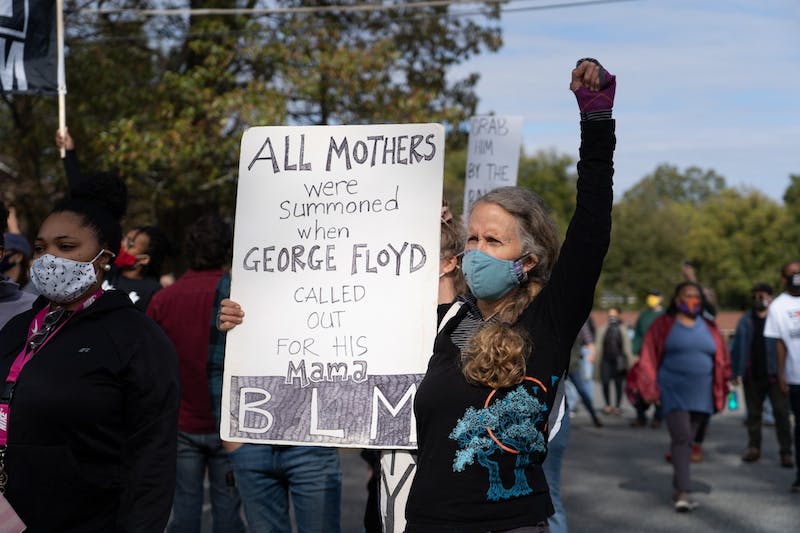 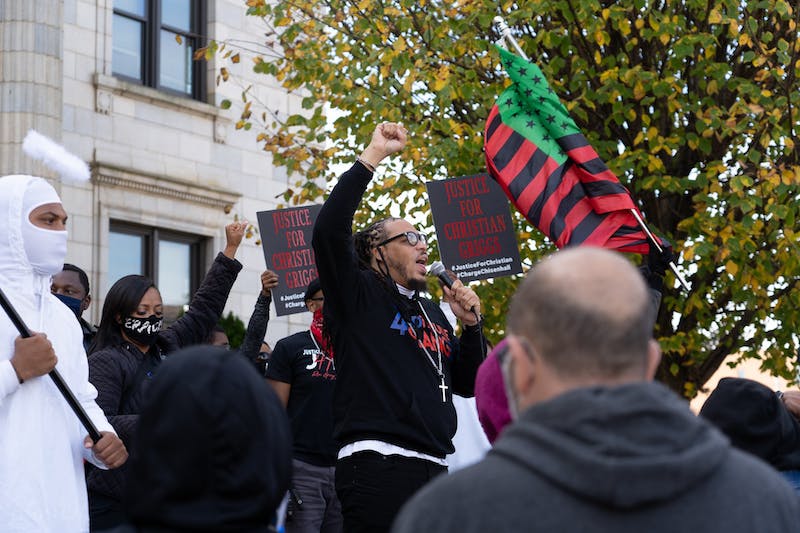 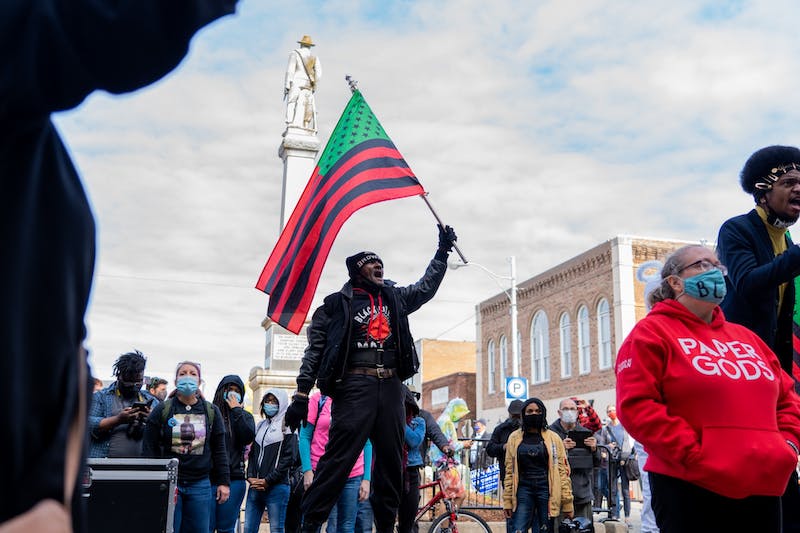 More than a hundred people gathered in Graham, N.C. for the I Am Change Legacy March to the Polls on Oct. 31, 2020. The march started at the Wayman Chapel Church and ended at the Alamance County Courthouse. What started as a peaceful march ended with aggression from the  Alamance County Sheriffs which included pepper spray and taking marchers into custody.

GRAHAM — A march to encourage people to vote in the 2020 general election started off peacefully until law enforcement asked the protesters to disperse and began pepper spraying the crowd of over a hundred people, including Alamance County residents, Elon University students and children.

The Alamance County Sheriff’s Office confirmed that two Elon students were arrested at the “I Am Change Legacy March To the Polls” in downtown Graham. As of 6:45 p.m. both students have been released on a written promise that they will show up to court, according to the Sheriff's Office.

The Graham Police Department arrested eight people for different offenses including: resist, delay and obstruct, failure to disperse and one count of assault on a law enforcement officer.

Around 1 p.m. law enforcement used pepper spray to disperse the crowd that was gathered in front of the Alamance County courthouse. Five Elon News Network reporters were among those pepper sprayed.

Moments before the clash with police, hundreds were kneeling in front of the courthouse, where a 30-foot tall Confederate monument stands. The site has been a center for controversy, but has seen increased tension from recent protests against racial injustice.

According to a statement from Graham PD,  “a crowd control measure that consisted of spraying a pepper-based vapor onto the ground” was used after marchers were told to clear the road.

The department said “the assembly reached a level of conduct that led to the rally being deemed unsafe and unlawful by unified command.”

Graham PD said that officers gave a five-minute warning on an order to disperse and then gave three subsequent warnings, which prompted them to use pepper spray when people did not disperse after the final warning.

The Alamance County Sheriff’s Office and the Graham Police Department were both present at the scene. The organizer of the event, Rev. Gregory Drumwright, was detained and arrested following the order to disperse off the county courthouse property.

"Peaceful demonstrators should be able to have their voices heard and voter intimidation in any form cannot be tolerated," Cooper said.

According to a statement from the Graham Police Department, Drumwright was told to contact the city council in order to close the road for the march. The statement said Drumwright did not meet the deadline to petition a road closure on Oct. 13, but got a permit from the Sheriff’s Office.

“At that time the Graham Police Department provided several possible options that detailed route and rally points. None of our options included a road closure for the duration of the event due to its proximity to the voting poll located at 201 W. Elm St.,” the statement said. “A road closure where he requested, Courtsquare, would have limited access and available parking for the polling site. An agreement for road closure was not made at that meeting and Mr. Drumwright was directed to the Alamance County Sheriff's Office for the issuance of a permit to use county property at the historic courthouse as a rally location. Once we confirmed the permit was issued the Graham Police Department made provisions to provide traffic control and public safety to those participating in the march.”

The event was meant to emphasize the importance of voting in Alamance County, ending with demonstrators going to polling places in Graham, since Saturday was the last day for early voting in North Carolina.

Shon Green one of the speakers at the march, wanted to empower young voters to cast their ballots.

“This is what we call collective power [...] maybe your vote by yourself doesn’t count [but] it’s not about my vote counting it’s about our votes counting,” Green told Elon News Network at the march.

Green was also arrested by officers at the courthouse. He told Elon News Network that he "witnessed elderly people, children throwing up, others scared for their kids."

"I was feeling the strength of my ancestors and letting me know you're fine. Like don't stand down, don't step down to this," Green said.

The march was a dual protest taking place in two cities. On Oct. 30, a march took place from downtown Greensboro to an early voting location at North Carolina A&T State University. Drumwright, the organizer of the marches, is from Alamance County and is now a pastor in Greensboro.

In Graham, marchers started at the Wayman Chapel AME Church around 11:30 a.m. and made their way to the courthouse.

Among the marchers was Danielle Lake, director of Design Thinking at Elon University, who brought her two sons to the march. Lake said while she wrestled with the decision to bring her kids, she wanted them to “see the reality of these moments,” in as safe a way as possible. This was their first march.

“We need all of our communities to be safe for everyone,” Lake said.

Lake said there was only about “30 seconds” between when officers told the crowd to disperse from the road until she heard screams and shouts. Originally, Lake said she thought the officers were trying to make more room to set up the stage for speakers.

Lake left shortly after, saying she no longer felt comfortable being there with her sons.

Elon alumna Shay Burnett was present at the march and said that "it was just an awful situation” in regards to how law enforcement handled the march.

"You had multiple people falling out, you had kids throwing up. Like, it was just so ridiculous," Burnett said.

Mayor of the city of Burlington Ian Baltutis, who marched and spoke at the event, said at the march he didn't know why the marchers were pepper-sprayed. Baltutis said the five-minute warning to disperse was given after marchers were already pepper sprayed.

Isabella Seman contributed to the reporting of this story.