Elon University hosted an online panel discussion to speak about the storming of the U.S. Capitol by a pro-Trump mob 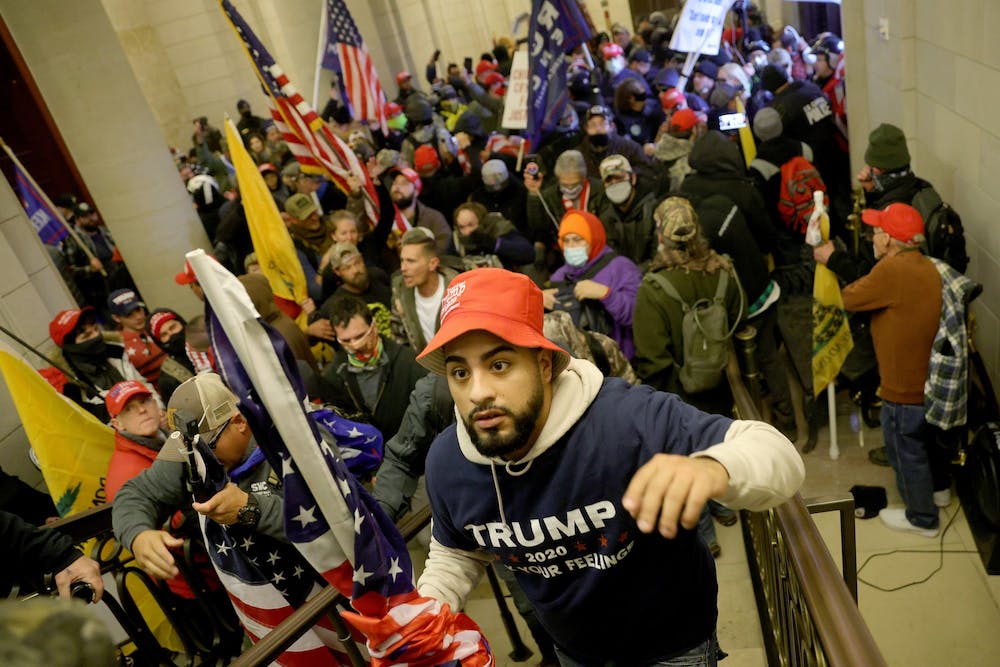 As Congress was in session, hundreds of supporters of President Donald Trump were on Capitol grounds and broke into the building, clashing with Capitol Police — leaving one officer dead. One rioter was shot and killed by Capitol Police, while three rioters died from medical emergencies.

The host of the panel — associate professor of political science Carrie Eaves — shared her perspective as someone who interned in the Capitol during the start of the Iraq War. Eaves described receiving a gas mask, similar to ones issued to lawmakers as they were evacuated or sheltered in place during the events at the Capitol.

“I was really struck as I watched things happening last Wednesday thinking about how those gas masks had sat unopened, and how we thought we might have to use them for some sort of foreign terrorism,” she said. “But here they were being opened because the constituents of some of these members of Congress were storming the building.”

Squire, who tracks right-wing groups on various platforms of social media, discussed the meaning of the insurrection to these groups who helped orchestrate the events of Jan. 6.

“It was pretty obvious to the people that watched this that this day was symbolic,” Squire said, describing the buildup in momentum that far-right groups had in the weeks after the election as dozens of lawsuits contesting the results of the election flooded the court system. “They had been practicing for six to eight weeks since the election at different events all around the country.”

Hatcher, who teaches religion and media, discussed the impact that white Christian nationalism had during the insurrection, referencing Confederate and far-right flags and symbols seen at the Capitol that day, flown alongside Christian flags brought by organizers.

“[Those symbols] are all mingled together in the minds of many of the people who were there at that rally and that insurrection,” Hatcher said, referencing a sign that compared Jesus to Trump. “What seems extreme has been moved into the mainstream, and we are seeing it on display.”

Adding to this, Irons, who studies the Civil War and southern history, spoke about the voices of the Confederate South having been amplified by extremist groups present at the insurrection.

“The whole Confederate experiment is based on the idea that white voices are the ones who matter,” Irons said, describing earlier his shock at seeing images of the Confederate Flag being waved in the halls of the Capitol building. “All the time in American history, we see white Americans acting outside the formal machinery of law, when their racial self-interests and the law doesn't seem to work fast enough.”

“The differences in racial bias in policing showed up at every stage … in terms of those groups planning this event and it not being taken with the depth of seriousness that any other planned protest we have seen has been taken,” Baker said. “They got to go home, while people who were innocently pepper sprayed and tear gassed this summer were taken into custody, arrested and put in handcuffs.”

Since the events of Jan. 6, 120 people have been identified and arrested in connection to the mob, while D.C police arrested five times more people at the height of the BLM protests compared to the storming of the Capitol.

The events of that day have been denounced by lawmakers from both parties, and the House of Representatives has since impeached Trump for a second time for his role in inciting the insurrection.

Carew, whose specialties include political psychology and race and gender in American politics, talked about the role that policy has in moving past the events and how lawmakers need to question if a policy response can have meaningful effects in a change in conduct of elected officials.

“It is going to be difficult to attempt to push forward to anything new with regards to policy to be able to adjust for some of this,” Carew said. “When you operate on by way of norms … but you don't have teeth behind those norms in any way, then people push past [rules] and it surprises us.”