The vice president was in North Carolina today for the first time since taking office, and spoke about President Joe Biden’s American Jobs Plan 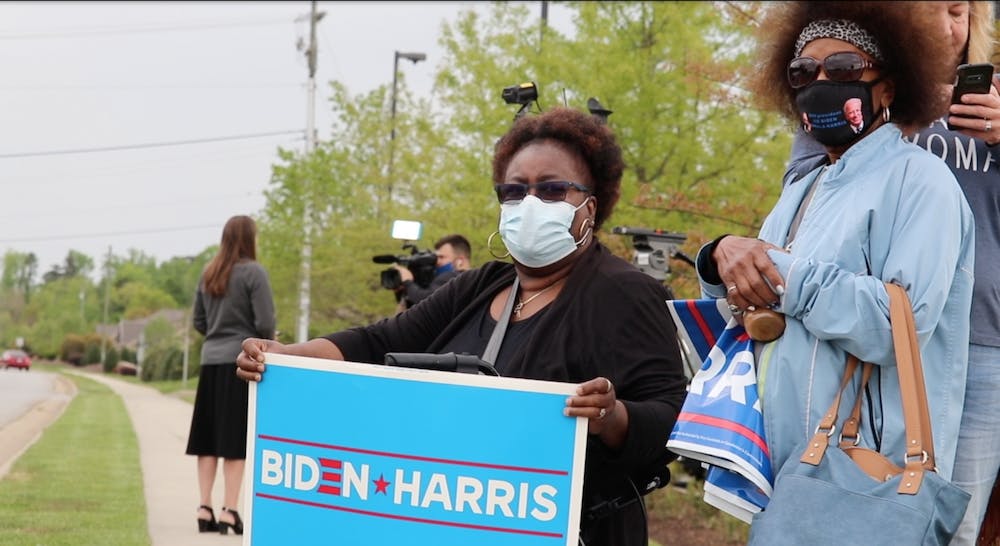 Her first stop was at Guilford Technical Community College in Jamestown. The college was selected due to its technical training at the Center for Advanced Manufacturing.

“Over the years, folks here in Greensboro have shown me around their hometown with great pride about where they're from,” Harris said. “Too often, though — and we've seen this around the country — opportunity knocks from far away, and their children grow up and have to move away. But that should be a choice, not a necessity. And that's why we want to bring opportunity closer to home.”

Balancing her son on her hip, second grade teacher Coree Forte said she did not expect to be standing outside GTCC hoping to catch a glimpse of the vice president when she woke up this morning. Forte wanted her son to witness the importance of the American Jobs Plan up close, and she hopes to share what the plan has to offer with her students.

“Finding out what she’s here for really made me just put everything aside today and stand for it,” Forte said. “It’s been an ongoing issue going on here, and having our vice president come to a small city as Greensboro is very inspiring.”

Harris spoke about expanding broadband internet accessibility and affordability, hoping to help children who don’t have access to the internet at home and elderly Americans who haven’t been able to see their doctors virtually.

“It's a once-in-a-lifetime, once-in-a-generation investment in America's infrastructure, in America's future,” Harris said. “It is what the American people deserve. It will keep our nation competitive, it will build up our nation's communities and it will put our nation back to work.”

Forte said she feels inspired about the possible expansion of broadband internet and the community college partnerships. She said it was special to see a Black woman in the White House.

The infrastructure plan invests $100 billion in broadband internet. The plan aims to provide access to underserved and unserved areas and get “complete coverage” across the country.

“I’m inspired by her,” Forte said. “I want my son to be a part of history. I want him to know the sky is the limit.”

“In America, we not only dream, we do,” Harris said. “We not only see what has been, we see what can be. We shoot for the moon, and then we plant our flag on it.”

Ninety days into the Biden-Harris administration, Harris said she has already seen “American aspiration” at work.

“Help is here,” Harris said. “Help is here. Hope is here, things are looking up. Schools are reopening. Businesses are reopening. Grandparents are seeing their grandchildren in person. We are delivering real, real relief. And the American people are now able to breathe easier and sleep better.”

Nearly 10 million Americans are unemployed — 250,000 in North Carolina — and Harris said she and President Joe Biden will continue to work to create millions of jobs, and this will be the largest job investment in the country since World War II.

“North Carolina, the president and I are determined to get this done,” Harris said. “Like you, like Americans everywhere, we are not afraid of the hard work it will take.”

“It definitely makes me feel special because GTCC, it’s a community college not a lot of people out of North Carolina know about,” Davis said. “But to think that she chose my community college is something that is really special to me.”

After speaking at GTCC, Harris travelled to High Point where she planned to visit Thomas Built Buses, an electric school bus manufacturer.

Ellis Chandler contributed to the reporting of this story.