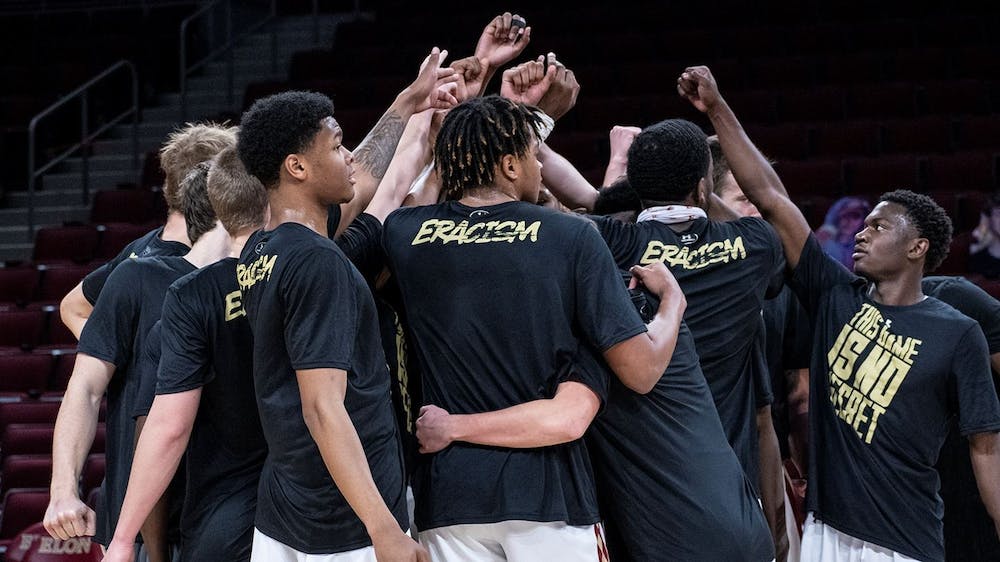 The Elon University men’s basketball team huddles up while wearing anti-racism shirts before a game. Photo courtesy of Elon Athletics.

“One of the big focuses is going to be for us to know and be sure that we have a climate where students can feel comfortable — where they’re not afraid to be who they are 100%,” Shearer said.

This survey is part of many equity initiatives planned for Elon Athletics, which formed a diversity and inclusion advisory committee in August to promote equity within athletics. The committee is made up of athletes, coaches and administrative staff.

Junior football player Cole Coleman, a Black athlete, helped create the climate survey. He said the football team is a good example of a diverse and inclusive environment.

Students sent emails to Shearer over the summer with ideas on how to create a more diverse and equitable environment. She said it was amazing to see the students so engaged in the world around them and trying to think about what they can do to make things better.

Shearer said the subcommittees will present their findings and recommendations to Athletic Director Dave Blank and his senior staff.

“We really want to gauge sort of how open this environment is to having the kind of conversations that we need to have,” Shearer said.

Shearer said she expects the results of the survey to be in by March 1. Then, the committee will pick specific goals to accomplish based on those results.

Coleman said this survey is only the beginning.

“My hopes would be that diversity isn’t something that has to be, you know, forced upon its students any longer or has to be strived for so much or are focused on to where it would naturally be a more diverse environment.”

“It’s important in life that people be able to bring their whole selves to something,” Shearer said. “And if our students feel that they can’t do that, then they’re not maximizing their potential anywhere, including the athletic field.”

Elon Athletics has already taken steps toward a more diverse and inclusive department, according to Shearer. The football team has formed a unity council. Shearer said other teams have also read books, had conversations and invited Vice President and Associate Provost for Inclusive Excellence Randy Williams and staff from one of the other identity offices on campus to facilitate conversations surrounding identity, diversity, equity and inclusion.

Shearer said educating students and creating an equitable experience for athletes once they arrive on campus is important. But the issue is out of Elon’s hands before the athletes reach the university level.

“It’s hard because students are specializing so early in their sports. There are all kinds of issues that are happening in youth sports,” Shearer said. “It’s hard for us to impact the makeup of our recruiting pool. It sort of is what it is.”