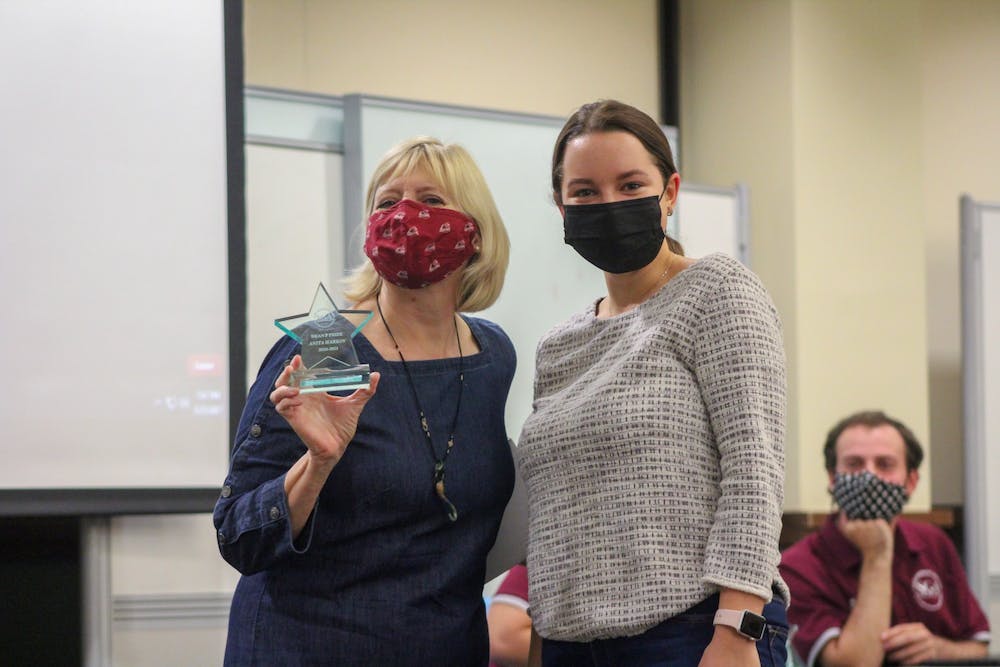 The dinner included senate awards, swearing-in of the executive board for the 2021-2022 school year, a speech from Associate Vice President for Student Life Jana Lynn Patterson honoring the outgoing seniors and an open mic for those who wanted to speak.

“Last year I felt a sense of gratitude but a sense of sadness,” Patterson said about sending last year’s members off during the start of the pandemic. “But tonight, I feel a sense of hope.”

Outgoing Executive Vice President Jonathan Stettler awarded the committee of the year award to the finance board. Stettler said the board met weekly and processed over 180 requests from students and organizations around campus for funding.

“We’ve been able to keep Elon connected and engaged during a year of isolation,” outgoing Executive Treasurer Andrew Ciampa said in regards to the finance board.

The rising star awards, presented to senators who participated in SGA for the first time, recognized the accomplishments of Britt Mobley ‘24 and Victoria Burfield ‘23.

The spirit of the senate awards, presented to senators who are what Miley described as “representative of what SGA should be” were awarded to Jack Taylor ‘21 and Trevor Molin ‘23.

The senator of the year award was presented to Hailey Jurgens.  The final Senate Award given was the dean’s award and was given to Anita Harkov ‘22.

Patterson said that while everyone deserved the dean’s award after the year they had all endured, Harkov attended every SGA meeting despite being in her home country Estonia during a portion of the year.

Following the awards, Patterson gave a speech to the outgoing seniors in SGA. She described how challenging the past year had been but said the work everyone had put in was “monumental”.

“Being on the executive board itself is not easy,” Patterson said. “But it is 500 times not as easy during this past year.”

The seniors were also gifted with royal blue graduation cords symbolizing both their participation in SGA and their leadership throughout campus as well as an acorn shaped pin.