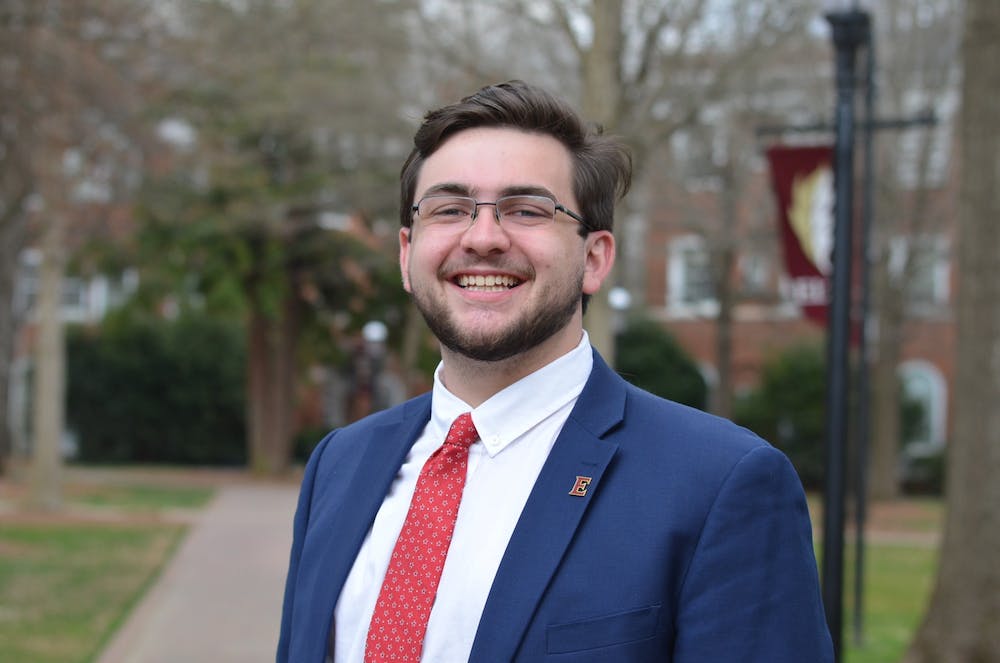 Updated March 19 at 7:41 p.m. to include the winners of the at large and academic relations councils.

Jack Corby has been elected as executive president of Elon University’s Student Government Association. Results for the 2021 SGA election are now official. Corby, a junior policy studies and sport management major, won by 82% of the vote.

For executive vice president, there will be a runoff election between Chloe Yoon ‘22  and Ireland Horan ‘22 held Tuesday, March 23. Neither candidate reached the majority margin as expressed in SGA’s constitution.

Corby’s platform was based on what he refers to as the five C’s: continuity, communication, community, culture and care, with some of his main priorities being centered around diversity, equity and inclusion as well as further communication regarding the university’s COVID-19 response.

Corby said his top goals as president is implementing policies that stick to his five C’s that he promised during his campaign. He said initiatives, like the 2019 pilot program that put free menstrual products in bathrooms around campus, are programs he wants SGA to continue. As for that menstrual products program, he hopes that as the two-year pilot program expires that SGA is able to start up an expanded and more inclusive and permanent plan.

“There are people on this campus that use different bathrooms but need those products and need access to those products,” Corby said. “I just want to make sure that every student has access to the products for the entire time that they're here.”

Corby also said he wants to see more student art being displayed around campus. He feels that Elon has impressive visual and performing arts programs that are often overlooked by students.

“I think that arts are something that a lot of alumni look at us and are very proud of,” Corby said. “But not a lot of students on campus do that [and] I want to bring that to the forefront of this campus.”

The amendments to SGA’s constitution, which would restructure the organization, were approved by the student body with 92% voting in favor.

For the class of 2022 election, Liam O’Connor was elected president, vice president is Andrea Sheetz, treasurer is Mason Yeo and the senators are Brooks Lacoste and Anita Harkov.

For the class of 2023 election, Chase Solomon was elected president, Victoria Burfield as secretary, Jamison Skelley as treasurer and the senators are Blake Dixon and Callahan Johnston.

The class of 2024 election results are Britt Mobley as president, Chloe Higgins as vice president,  Matthew Barker as secretary, Zeth Dixon as treasurer and Demetria Hall and Genesis Tolbert as senators.

The representatives of the Academic Council for the College of Arts & Sciences are Whitney McDonnell '24, Sydney Coker '22, Charlotte Mattamiro ‘24 and Georgia Daniel '24 and for the School of Communications are Nadine Jose '23 and William Wood '24. The representatives of the finance board are Kiara Hunter ‘22, Josephine Williams '22, Aleezah Adams '24 and Brandon Goodman '22.

The vacant seats for the class of 2022 secretary, class of 2023 vice president, representatives on the Academic Council for the Love School of Business and School of Education will be appointed by the executive president and confirmed by the senate.