Following the NLRB decision and staff and faculty urges, the university has decided to bargain with the faculty union 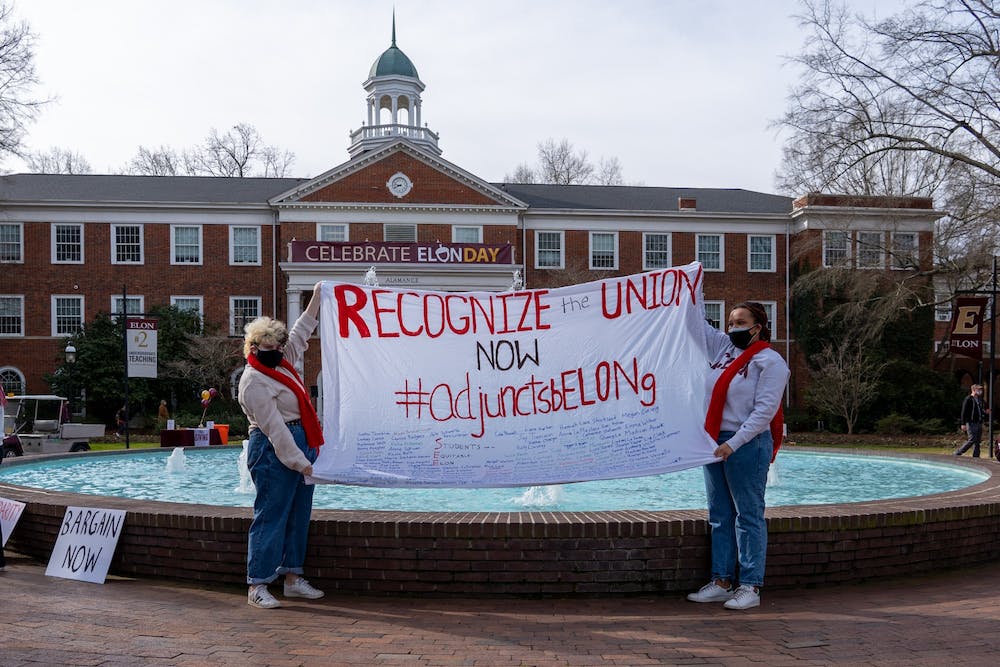 
Marah Caidin (left) who is a sophomore and UNCG and Trinity Dixon (right) who is a junior at Elon, hold up a “recognize the union” banner during Boldly Elon Solidarity Collective’s protest at the special Elon Day college coffee on March 2 in front of Alamance.

Elon University administration will bargain with the faculty union, according to an email from Provost Aswani Volety to faculty and staff on March 4. This decision follows the certification of the faculty union by the National Labor Relations Board on Feb. 19. The decision determined that part-time, limited term and visiting faculty at Elon are eligible to form a union.

“In light of the NLRB decision, we have determined the best path at this time is to forego legal challenges and bargain in good faith with the union,” Volety wrote. “Elon remains committed to its values of respect, transparency and collegiality and to the preservation of the university's unique system of shared governance.”

Volety and a university spokesperson declined to comment further regarding the union decision.

Mark Iwinski, adjunct assistant professor of art and a member of the union, smiled broadly as he described how excited he was to read the email from Volety this afternoon. Iwinski said the union sent a letter to the university on Tuesday to begin bargaining, and they had not expected the university to respond so soon.

“We knew that they would respond to that at some point but we didn't know, or expect this quite so quickly, and in such a meaningful way, in the sense that they said, they’re going to engage with us and bargain in good faith, and to hear that coming out of this was fantastic,” Iwinski said.

Several faculty groups, including the Academic Council and Elon’s chapter of the Association of American University Professors both made statements in February advocating for the university to bargain with the union.

On Elon Day, March 2, several students from the Boldly Elon Solidarity Collective, a self-identified non-partisan student group, also advocated for the university to drop all legal proceedings against the union and begin bargaining.

According to Iwinski, the union will send out a survey to all members asking what they want to see at the bargaining table. Iwinski said multi-year contracts, higher pay, retirement, health insurance and mentoring abilities are a few of the items the union will be advocating for.

“From what we know from the surveys we've done in the past ... the life changing things — and these will be life changing significant things for a lot of adjuncts — are going to really be very morale boosting in terms of providing a sense of security,” Iwinski said.