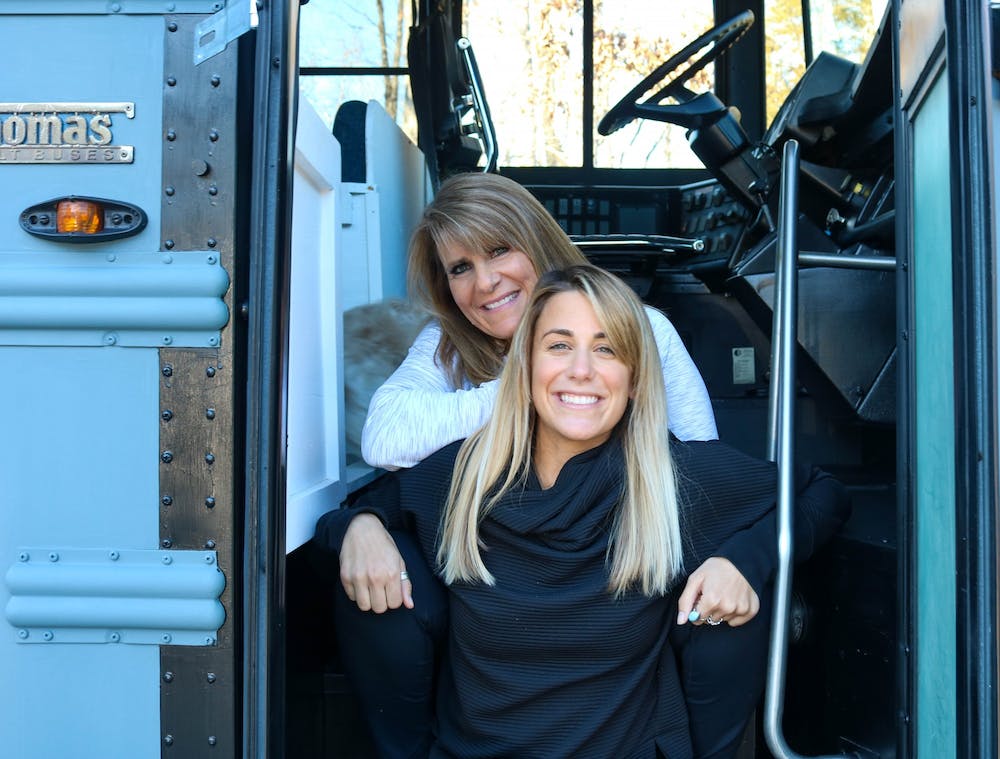 Photo by Grace Terry | Elon News Network
Lisa (top) and Megan Donahue (bottom) sit in the entrance of the latest bus they are transforming, Tobius.

“Tobius” sits still, basking in the sunlight on the concrete driveway. It’s the same spot that Angus, Brutus, Marcus and Gus once sat, but they have new families.

Elon University alum Megan Donahue ‘20 and her mother, Lisa, cover Tobius’ metal sides with paint looking for any spots that need touch-ups. Megan is trying to make the 30-foot vehicle look perfect before he hits Craigslist.

“They don’t leave until they’re perfect,” Megan said. “You can eat off the floor of them. I say I want to advertise like that: a video of me eating off the floor because I would.”

Tobius is the latest bus the mother-daughter duo is transforming into a home under the banner of their company Live Simply. The company began as a way to honor Megan’s brother, Michael, who died in 2015 after getting hit by a car.

Michael always loved being outdoors and a week before he died, he tweeted, “It is the simple things in life that make it worth living.”

Megan wanted to find a way to take that mentality and turn it into a project that her whole family could be a part of. Originally they thought of flipping houses, but decided against that due the large financial commitment required. They realized that they could afford a school bus instead, and thought a home in a bus epitomized Michael’s message.

“I think people now, especially with the pandemic, they’re realizing that all of this is not worth it,” Lisa said, gesturing at her home. “It’s the quality time, and that’s what we’re trying to promote.”

That same month they went to a junkyard and found a little bus, which they named Gus. Gus was the first of five buses they have redone.

Gus took over a year to transform because Megan was still in school at Elon and could only come home to her family’s house in Graham on the weekends. In order to complete the job, they worked with carpenters, electricians and plumbers. Once the design was complete and safety inspections were passed, he took only 12 hours to sell.

They attribute the fast sale to the effort they put into the appearance of the bus and their work to make it economical.

“We want to make sure [the price] is reasonable,” Lisa said. “But at the end of the day, we just want it to go to somebody who is going to spread the word about Michael.”

They do not want to use sorrow as a reason to make a sale, though.

“Just keep my brother’s name going, and that’s all we can really ask for from whoever buys them, but not in a sad way; my brother goes everywhere those buses go,” Megan said. “We don’t do it as a pity thing. We don’t tell the story about him at all until the check is in our hand because we never want to make a sale because of a tragedy.”

According to Megan, they have turned people down in order to fulfill that goal. She remembers when they were selling Marcus, someone was willing to give them $8,000 more than they were asking. They turned them down and instead sold it to the “most perfect person”: Laura Thomas.

“Laura comes over here, she had beers with us and would bring her dog and family and they celebrated her grandpa’s 94th birthday in it,” Megan said. “We take a lot of pride in who buys what we make and everyone we have sold a bus to keeps in contact for the most part.”

Laura is also planning on bringing the bus to Alaska, which means a lot to the Donahues because it was always Michael’s dream to go there.

Megan wants to one day have a potluck with all the people who own one of the buses.

Another dream of Megan’s is get the buses on a property in Vermont and turn them into rental properties. For now though, she thinks her next step is getting into real estate.

Megan said she knows her brother would be proud of her. She even was told so by him after the mother of an old basketball teammate of Megan’s went to a medium and Michael came through.

“My brother came through and was like ‘tell my sister how much I loved the buses,’” said Megan “I hadn’t talked to this girl in like 10 years.”

Beyond carrying on Michael’s legacy, they also got grow their connection

“We were best friends before,” Megan said, “but now it’s just like a new level.”