Lawson will serve as the new director of diversity, equity and inclusion at Reconstructing Judaism 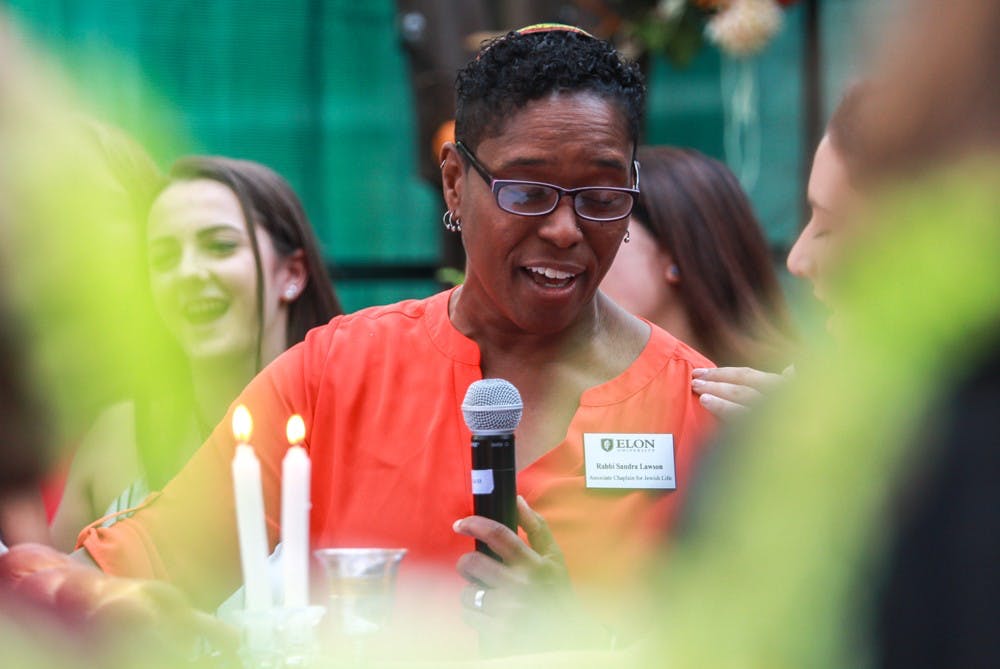 
Lawson delivers the HaMotzi blessing during Sukkot on Sept. 29, 2019.

After serving over two years as the associate chaplain for Jewish Life and Jewish Educator at Hillel, Rabbi Sandra Lawson — who is thought to be the only openly gay and Black rabbi in the world — said she plans to leave Elon University for a new position.

Lawson said she will be accepting a new position as the director of diversity, equity and inclusion at Reconstructing Judaism, a modern Jewish organization dedicated to progressively shaping the religion.

“I'm leaving Elon for a job that I just can't turn down,” Lawson said. “I have a national platform to do the anti-racist work that I want to do and work to combat antisemitism.”

Lawson is known informally on the internet as “The Snapchat Rabbi,” and Elon hired her to bring a new perspective to the campus' Jewish community.

“We didn't want someone who would just come and fit in. We wanted someone to come in and challenge us,” University Chaplain Jan Fuller told Elon News Network in 2019 when Lawson was hired.

Fuller is also departing Elon after ten years, as she retires from over 30 years of chaplaincy.

Even though she’s leaving her position, Lawson said she still wants to be available to students. In the fall, she said it was important for her role as a Rabbi to be there for Jewish students and students of color who felt unsafe because of the pro-Trump rally that drove through campus in the fall.

According to the Anti-Defamation League, an international Jewish organization that tracks anti-semitism around the world, reported the highest level of anti-semitic acts in 2019. The town of Elon has been the site of two suspected acts of hate in the past two years, including a menorah torn down outside the Elon Chabad House.

According to Lawson, she’ll still be a resident of Alamance County and keeping in touch with any students that still want her to be their rabbi.

“It is sad for me to leave, because I like engaging with students,” Lawson said. “Telling students I was leaving was harder than telling the adults around me. The first two students I told started crying. Cause I was just like, ‘oh wow this is really hard.’”

Elon University’s Center for Jewish Life said in an email to Jewish students on campus that Lawson’s last day is Feb. 17.