Menorah outside of Elon Chabad torn down, caught on camera 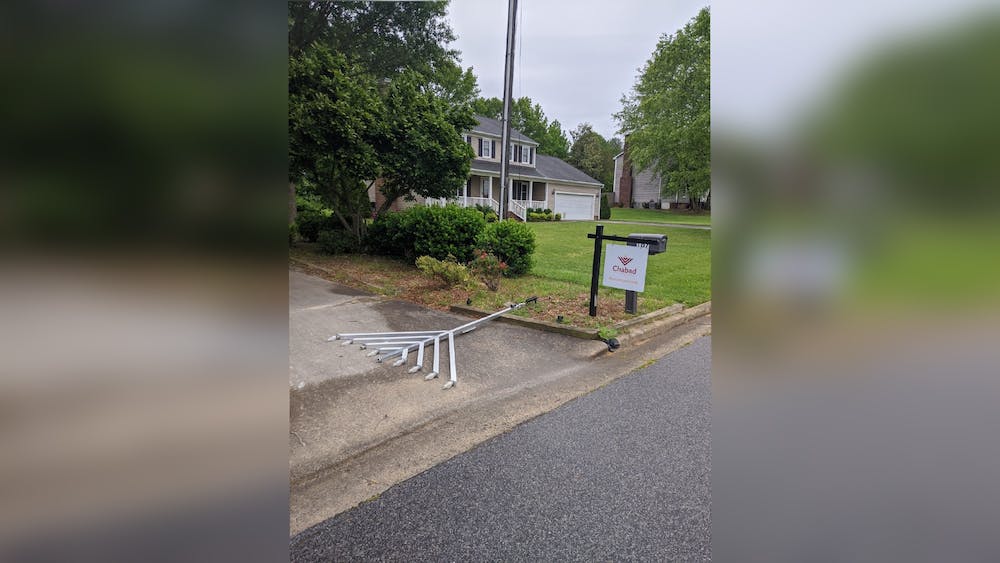 Updated at 7:20 p.m. on May 14 to include surveillance video of the incident that was released by the Town of Elon Police Department on Thursday evening.

The menorah posted outside of Elon University’s Chabad off-campus house was torn down late Tuesday night. In a statement to Elon News Network, Rabbi Mendy Minkowitz said this was an act of vandalism.

Minkowitz said the incident was caught on camera. According to a Facebook post from Chabad, and later a press release from the Town of Elon Police Department, the video shows an unidentified individual stop in front of the Chabad house and exit their car, tear down the Menorah, get back in their car and then drive away.

Town of Elon police released the video footage of the incident on Thursday evening.

The security cameras that caught the incident were installed in October after the car was damaged as a way to increase already-existing security. Minkowitz said if not for these cameras, the incident would not have been captured as clearly as it was and Chabad will now most likely have to increase their security even more.

According to Minkowitz, a police report was filed with the Town of Elon Police Department. The department said they are investigating the incident as a hate crime in a statement on May 14.

The department said the police report is not available yet.

Police officers from the Town of Elon Police Department were also stationed outside the Chabad house on May 14 handing out flyers to cars driving by in hopes for assistance in the investigation. It is asking people with information to call the police department or Crimestoppers at (336) 229-7100.

While Minkowitz said his two youngest children are too young to understand what’s going on, he said his oldest son is aware of the incident but is not alarmed by the increase in police presence because “we’ve had it all year long.”

Chabad is raising money to cover the damages done to the menorah. Minkowitz said that he is “warmed by the response” from students and parents after the incident.

To donate, visit chabadelon.com/donate and write “Menorah” in the comments.