Even with more testing and a new COVID-19 alert system Jeff Stein, chair of the Ready & Resilient committee, is expecting a similar number of cases as the second half of the academic year begins 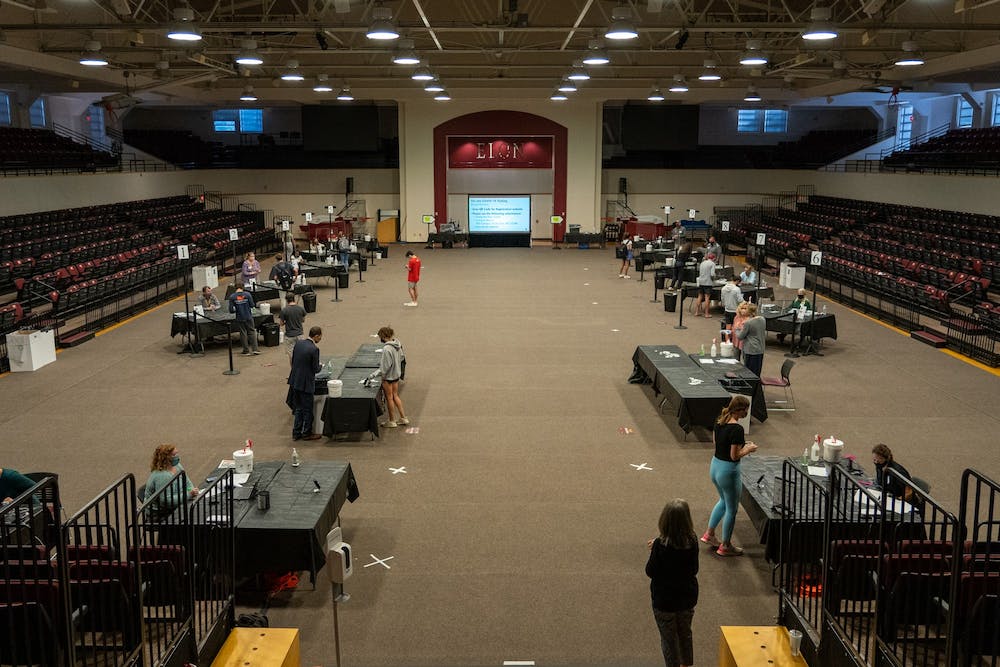 Stein isn’t convinced the winter and spring semesters will bring fewer COVID-19 cases, even though vaccine for students, faculty and staff is on the horizon.

The success of the rapid tests for the Elon community was discovered during the pre-departure antigen tests ahead of students returning home for the Thanksgiving holiday. The campus community reported 113 cases in the 10 days prior to the holiday.

“I was actually surprised. I think many were, [with] how many cases we caught,” Stein said.

Rapid antigen tests continue to be questioned against the gold-standard PCR test, but Stein said there were only a handful of false-positive results out of the thousands of individuals adding that he was surprised by the accuracy of the test.

The Winter Term and spring arrival rapid tests are all being donated by North Carolina’s Department of Health and Human Services. Stein said the tests provided by the state will help fill a gap before tests from Abbot arrive in the coming weeks.

This week, Abbot announced that it had fulfilled the federal government’s order of 150 million rapid tests and that the company will soon shift to support commercial distribution. The rapid tests are being provided to schools, universities, workplaces and pharmacies at a cost of $5 for qualified institutions and require no equipment, according to the company.

“The NCDHHS has helped us to get to this point and a little further, and then we'll be able to work with Abbott going forward from here so we will be able to use these rapid antigen tests testing 100% of undergraduates every week,” Stein said.

Stein said rapid testing for symptomatic students will now be available at health services. Any positive test from the rapid test will continue to be confirmed with a PCR test.

“You know I wish our system had been perfect in the fall,” Stein said. “It wasn't, and I think it was complicated and frustrating sometimes for students.”

One of the other changes for the upcoming semester is the new COVID-19 alert model the university is basing campus operations off of.

The biggest difference between the current and previous model is the way campus cases are monitored. Previously, more than 30 cases in a week were categorized under “Level 4.” The new model now considers 30 cases in a day to be under the highest level.

With the change, Stein said the university now has a “more realistic matrix.”

“[In the fall], we didn't know what kind of numbers we would get and we found that we were actually surprised, I think it's fair to say, by how many clusters we had, and how those clusters could, in some ways, be over here and not cause the entire campus to quarantine,” Stein said. “The model wasn't necessarily as functional for a college campus that had clusters. We didn't expect those clusters and so we needed to be able to watch those clusters.”

Quarantine time to remain the same

Stein said while the university tried to adjust to the new guidance from the CDC, but the Alamance County Health Department ultimately said they were against the “step down” approach when it came to reducing quarantining times.

“Last week [they] told us that they would not allow the step down based on conditions in the county and in the state. They really asked that we stick with the standard warranty,” Stein said.

With recruitment for greek organizations already pushed back from its traditional time between the end of Winter Term and the start of spring semester, there are still no clear plans for if and when recruitment would occur.

“I think [student life has] reexamined events like recruitment completely. Instead, let's look at different ways we can do this,” Stein said.

Stein said plans for commencement for both the class of 2021 and the class of 2020 are still underway with the senior class officers. Right now, they are planning for both the possibility of it happening or not. He said it would be “foolish” of them to make a decision now, but hopes to alert students and families of a decision by March.