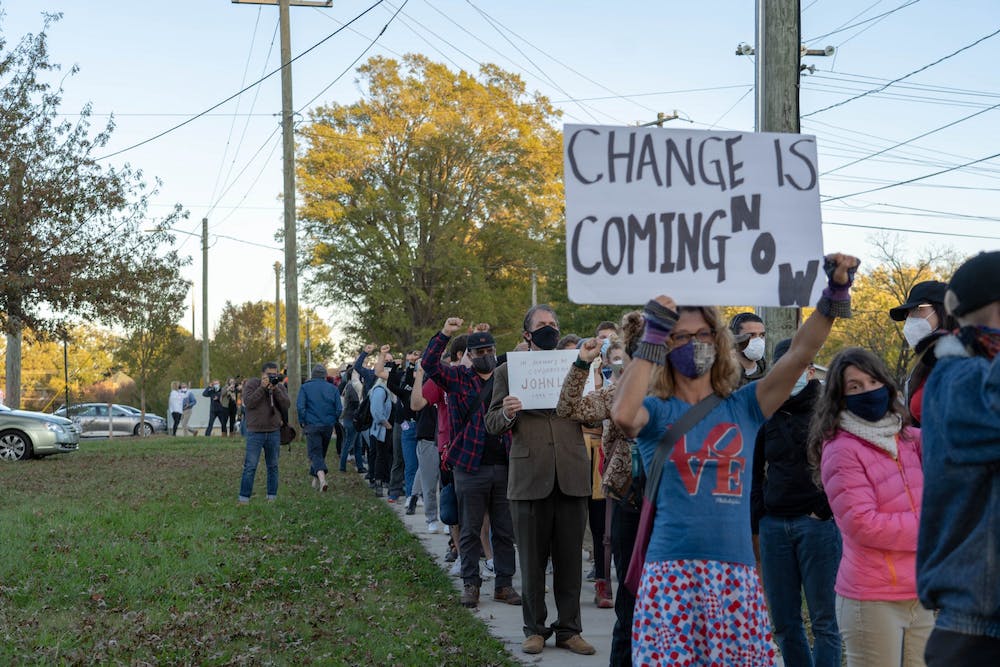 
On November 3, 2020, Rev. Gregory Drumwright held a re-do of his I Am Change Legacy March to the Polls that was ended by Alamance County sheriffs and Graham police by the use of pepper spray, detaining and arresting many attendants of the march.

GRAHAM — Hundreds of marchers came to Graham to march to a polling site on Election Day. This march followed the “I Am Change: Legacy March to The Polls,” which was cut short after police used pepper spray to disperse the crowd and multiple people were arrested.

Led by Rev. Gregory Drumwright, the organizer of Saturday’s march, the marchers walked from Wayman’s Chapel to the polling site they had originally intended to stop at — the Alamance County Office Annex Building — on Saturday. Drumwright, who was not allowed back to Graham until 4 p.m. this afternoon, spoke to the crowd and reminded marchers to stay on the sidewalk.

“I don’t care if the line is a mile long,” Drumwright told marchers. “We’re going to walk on the sidewalk.”

Drumwright also told people to stay out of the road so as to not obstruct voting. Two polling sites were on the march route, and Drumwright did not want marchers to become the subject of “any accusation” for obstructing voting.

At the march on Saturday, marchers stood, kneeled and sat in the road for 8 minutes and 46 seconds, the amount of time an officer kneeled on George Floyd’s neck over the summer before he died. Police used pepper spray to disperse the crowd moments later.

Burlington mayor Ian Baltutis, who was also present at the march on Saturday, said the events over the weekend “broke [his] heart.”

“It’s good to see a bigger crowd than on Saturday,” Baltutis said to the marchers before they began walking. “We are equals, we are all united and this is our moment.”

Also present at the last march was Faith Howell, a student at University of North Carolina Greensboro and mentor at the Boys and Girls Club. Howell said she came back today because she wanted to see Saturday’s objective reached.

“I witnessed what happened, I was a part of it,” Howell said. “I wanted our objective to be reached, to help people get to the polls, to educate people in marginalized communities on voting.”

Quencelyn Ellison is the president of Alamance Alliance 4 Justice, one of the organizations that helped put together both Saturday and today’s marches with Drumwright. Ellison marched on Saturday as well and said she came back today to make sure people “push for justice” in the community.

“We’re not just demonstrators and protesters,” Ellison said. “We’ve got to get our people to the  polls.”

Marchers did reach the polling site where they had intended to end up on Saturday at 5:30 p.m. Quinn Ray, an Elon business owner, said the march today brought awareness to Alamance County “demanding change.”

“Every four years during the presidential election cycle, it's time to progress our country to a better country for all,” Ray said.

Ray said the large voter turnout this year is something to “be in awe of.” While he was not able to attend the march on Saturday, Ray said the actions on Saturday were “uncalled for.”

Marchers proceeded from the polling place to the Graham town square, the site of both Saturday’s march and a 30-foot tall Confederate monument, which has been a center for controversy during recent protests against racial injustice.

Organizers told marchers not to engage with counter-protesters, who stood on sidewalks around the square.

The road leading up to the square was closed, according to the Alamance County Sheriff’s Office Facebook page. The post did not specify why the road was closed.