Elon students, others released from custody after being pepper sprayed during march 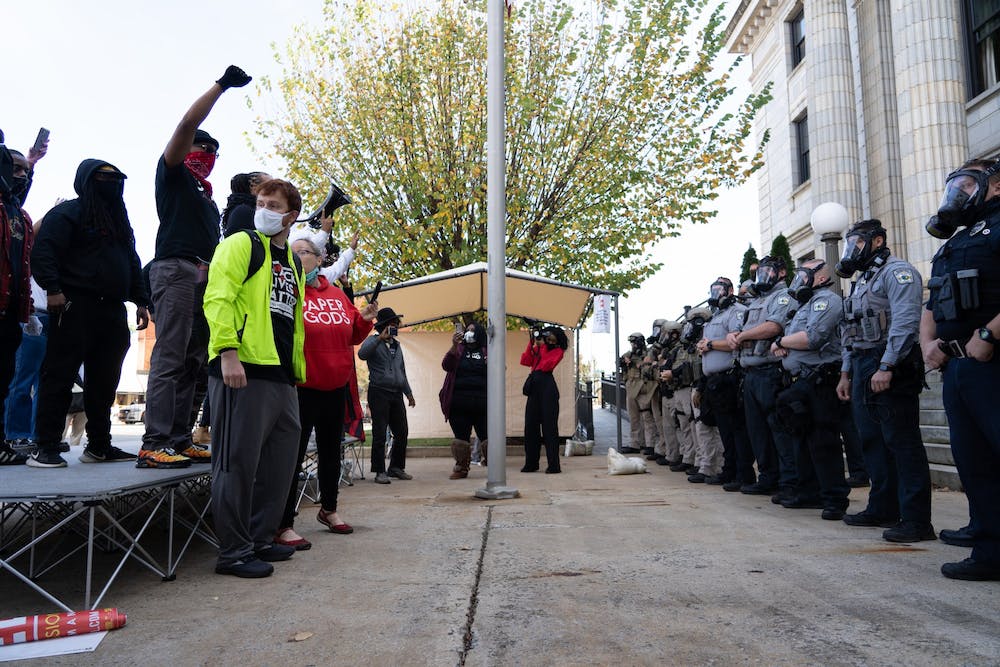 GRAHAM — Two Elon University students are out of police custody after being arrested during a march for voting rights and justice.

The event was civil until members of law enforcement began pepper spraying marchers. Members of the Alamance County Sheriff’s Office and Graham Police Department were present on scene.

Supporters of those arrested gathered outside of the Alamance County Detention Center in Graham chanting and clapping as the detainees were released one by one over the course of a few hours.

Elon junior Tim Olson attended the event and was arrested for failure to disperse.

“[The march] just kind of erupted into chaos. There was pushing and shoving but nothing violent,” Olson said. “He grabbed me and just pushed me to the ground. I mean, I was kind of ready for it so I just let it happen. Of the fight, flight or freeze, I think freeze is the best way to go.”

Olson was released from detention on a written promise that they will show up to their court date.

Olson said they attended the march to witness the disconnect between the Elon University and Alamance County communities.

“I’ve come out to Graham a couple of times at least panning to experience what the community of Graham and Alamance County and even North Carolina means in this context of racial justice,” Olson said.

Another Elon junior, Hannah Garcia, was also pepper sprayed and detained after she allegedly failed to vacate the premises after violating the permit. Now out of detention, she is not allowed into the City of Graham for 72 hours.

“I just remember I got awful pain in my eyes,” Garcia said.

She said her roughly four hours in detention came with several phone calls from Elon administrators, including School of Communications Dean Rochelle Ford.

Garcia believes that her detainment is “costly” but “beneficial.”

“The cost doesn't even match the benefits,” Garcia said. “I have depression, anxiety, and I mean, this is not easy, but I can do it. And if I can do it, literally, I think anyone can do it.”

Garcia said she believes it is important for students to get out of the Elon bubble they’ve been “blinded by” in order to experience the true needs of the Alamance County community. She says she’s frustrated to see peers say Black Lives Matter, but not show it.

“If we care about people, we need to be in the community and you can do that while still being COVID conscious,” Garcia said.” I'm literally doing the minimum and, but, but it's so important.”

Garcia said she plans on attending a Sunday press conference in Burlington at 12:30 p.m. with other individuals who were arrested Saturday.

Community member Shon Green was another individual arrested at the march. Green, who spoke at the march, said he wanted to encourage young voters to show up to the polls.

“It’s not about my vote counting, it’s about our votes counting,” Green told Elon News Network.

Green said the camaraderie shared inside the jail between several of the individuals arrested kept spirits high.

“I witnessed beauty, unity and collective power today,” Green said. “We were honored to be there and do what our ancestors had done for us. We were singing, we were laughing, we were praying together.”

Green said his body was thrown to the ground leading to a bloody knee staining his pants.

The Rev. Greg Drumwright organized the march and was also arrested. After being released, Drumwright gathered supporters outside of the detention center for a prayer.

“The law enforcement community has colluded with one another to suppress and to quell our efforts,” Drumwright said.

Annemarie Bonner contributed to this report.