On behalf of Rev. Gregory Drumwright and others, a lawsuit was filed against the Alamance County sheriff and Graham police chief for actions taken against the marchers 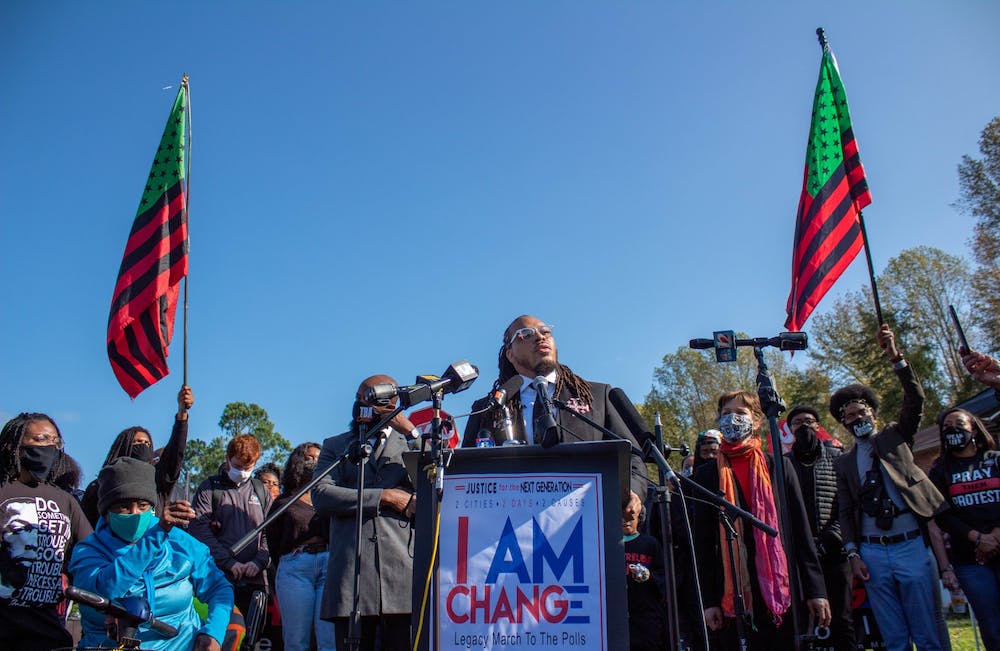 
The Rev. Greg Drumwright held a press conference on Nov. 3, the day after his arrest at the march to the polls event he organized in Graham. The march abruptly ended after Graham Police Department asked the crowd to disperse and began using pepper spray on attendees.

Following the march to the polls in Graham on Oct. 31 that abruptly ended after a clash with law enforcement, march organizer Rev. Gregory Drumwright has a lawsuit  filed on his behalf against Alamance County Sheriff Terry Johnson and Graham Police Department Chief of Police Kristy Cole for the actions taken at the court square.

The ACLU of North Carolina and the Lawyer’s Committee for Civil Right Under Law are filing the lawsuit on behalf of the plaintiffs. These two civil rights groups filed a lawsuit against the sheriff's office and city of Graham in July for restricting protests at the Confederate monument. That case was settled in October.

Drumwright, his organization Justice for the Next Generation — which organized the march — and Ann Jones — a member of the organization People for Change who helped organize the march — have had a lawsuit filed on their behalf against these officers.

The lawsuit claims that Drumwright, Jones and Justice for the Next Generation’s rights to speech and assembly were restricted by law enforcement when marchers were ordered to disperse, pepper spray was used and people were arrested.

According to the Graham Police Department at a press conference on Nov. 1, their officers deployed pepper spray as a method of crowd control — as opposed to physical force — because marchers were in the road.

At a press conference on Nov. 2, Michelle Middle, community engagement and diversity coordinator of the Alamance County Sheriff’s Office, said the sheriff’s officers began pepper spraying because an officer was shoved to the ground and deployed her pepper spray. Another officer sprayed a short burst into the air to disperse the crowd around her and the rest of the officers followed and sprayed the ground with pepper spray to keep the crowd from advancing.

In an interview with Elon News Network on Nov. 2 prior to the filing of the lawsuit, Drumwright disagreed that the officers only sprayed the ground.

“There is a public outcry against those false narratives simply because the world was watching,” Drumwright said. “There is tons of media — videos and pictures — that show that they did not exclusively direct their pepper spray to the ground, that they actually sprayed it directly at people, and I am one of those people.”

Multiple attendees of the march told Elon News Network that pepper spray was directed at people.

The lawsuit also claims that the law enforcement agencies violated the Voting Rights Act by “suppressing” voters’ ability to march to the polls by giving dispersal orders and using pepper spray to disperse people.

“Defendants violated 42 U.S.C. § 1985(3) by knowingly conspiring with each other to unlawfully disperse a march to the polls, with the purpose of discouraging and intimidating voters from exercising their constitutional right to vote,” the lawsuit said. “Defendants’ deployment of their officers, coordination regarding use of pepper spray and detention and arrest of attendees, constituted substantial steps in furtherance of the conspiracy.”

Graham PD said the order to disperse was given at the nine-minute mark after marchers paused for eight minutes and 46 seconds to honor George Floyd, because marchers were in the road.