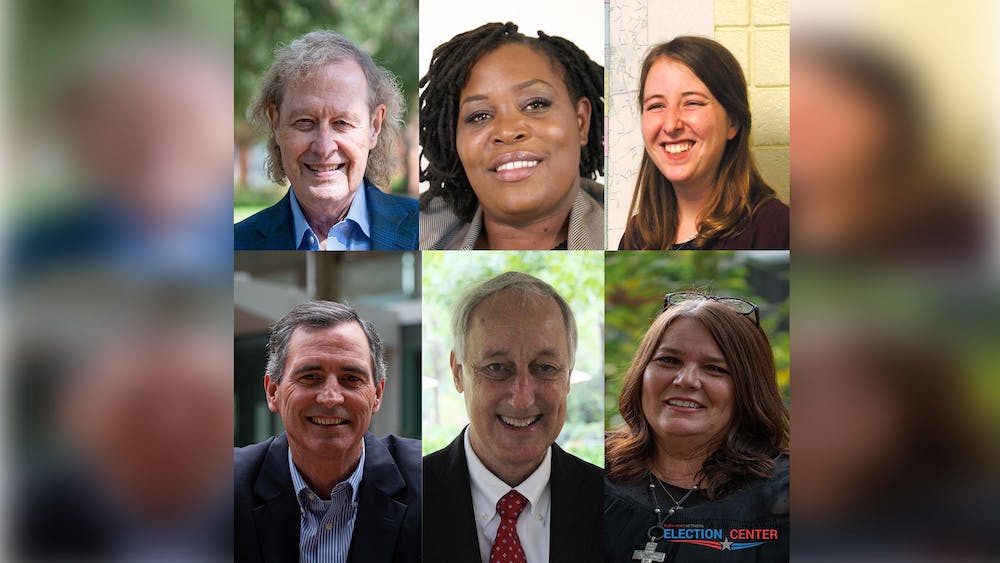 Six candidates battled for three open seats on the Alamance County Board of Commissioners. Three Republican candidates — Bill Lashley, John Paisley and Pamela Thompson — and three Democrats — Bob Byrd, Dreama Caldwell and Kristen Powers — all campaigned in the 2020 race. Only three will have seats on the board.

The five-member board of commissioners serve as the governing body of Alamance County. The elected officials serve a four-year term, with elections every even numbered year.

With 12 out of 38 precincts reporting in, Caldwell is talking with people at her watch party and Thompson, Caldwell’s campaign manager, said they are still feeling positive. Caldwell currently holds the least amount of votes, with 15.09%.

“We’re still looking forward to 100% completion, and we still have a shot,” Thompson said.

As ballots continue to be counted, Powers said she is still feeling anxious. Powers currently holds 16.12% of votes, sitting fifth out of the six candidates.

“The early vote is not turning out the way we would hope, but hopefully it’s going to turn around in the next few hours,” Powers said.

Byrd said he is “not feeling so good” as he sits fourth out of the six candidates for county commissioner. While Byrd is leading the Democratic candidates with 16.61% of the vote, he said it looks like the board may end up without Democratic member.

“It’s likely that my fourth place is going to be even further behind,” Byrd said. “But we’re just going to have to wait till those results are in.”

Democratic candidate Bob Byrd spent his Election Day at the polls. Byrd said he went to over a dozen polling sites today to thank poll workers, and he is going to watch the results this evening at home with his wife.

Byrd, who was a county commissioner previously, said he was “feeling hopeful” as polls closed in North Carolina.

“But I don’t feel this is a shoo-in for me by any means because I lost before,” Byrd said.

Kristen Powers, also a Democratic candidate for county commissioner, said as polls closed she was feeling anxious, but she is proud of the work her team has done throughout the campaign.

“I think pivoting from a pandemic, we won our primary in early March and within the next two weeks it totally changed,” Powers said. “I’m really proud that we were able to pivot and to make sure that we were caring for the community first before campaigning.”

“We are ready for the people to see that Black people can actually be the change that they want to see,” Thompson said.

As the polls closed in Alamance County, Republican candidate Pamela Thompson said she couldn't comment on what she thinks the results will be, but said she is staying positive.

"I just hope that everybody voted their heart and really think about what each of the candidates really represent," Thompson said. "I just hope people don't always vote party. I want them to always go for the right person because there's good and bad on both sides."