In 2016, 43.9% of voting-eligible Elon students participated in the election, which is below the national average of higher-ed institutions 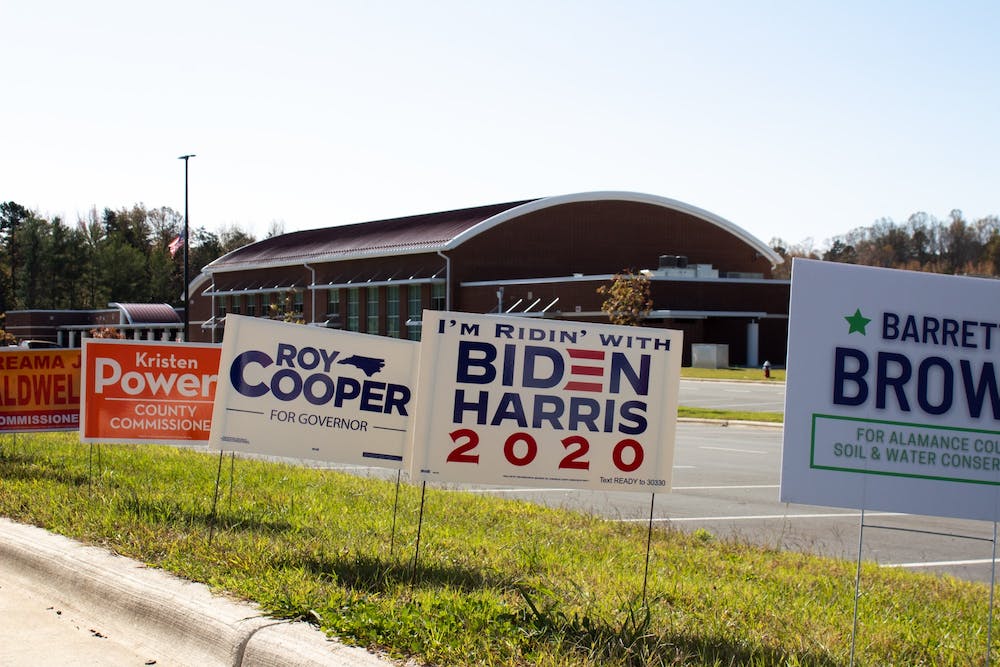 Photo by Miranda Ferrante | Elon News Network
Campaign signs outside of Elon Elementary School, one of the voting precincts in Elon, on Election Day.

North Carolina has seen an 11% increase in voter registrations in 18 to 24-year-olds for the 2020 election, according to the Center for Information & Research on Civic Learning and Engagement. As of Nov. 1, 92% of youth voters in the state cast their vote in the 2020 election.

Elon University students historically have had lower political participation. The Princeton Review ranked Elon six in the country for colleges with the least-politically active students, based on students’ ratings of their own political awareness. In 2016, 43.9% of voting-eligible students voted in the election, which is six percentage points lower than the national average, according to the National Study of Learning, Voting and Engagement.

“It’s our civic duty as American citizens,” Cate Podell, Elon junior and director of civic engagement with Elon Volunteers, said. “This is how we speak up for ourselves, how we advocate for ourselves. It’s how we hold our elected officials accountable, and it’s a privilege that we have.”

“We’ve seen a huge uptick in voter registrations for sure,” Podell said. “Just the amount of questions I’ve gotten personally from friends and on the [Elon Votes] Instagram about changing registration to North Carolina –– that was our most asked question this year.”

“Maryland tends to go pretty solidly blue every year,” Truitt said. “I knew that North Carolina was a more important state to cast my vote in. My vote would count here more.”

“Students realize that either person could win, their vote matters, this election is very much up for grabs for either candidate and the stakes are very high,” Husser said. “It will definitely change what happens over the next four years in American politics, but that will set the stage for an entire generation of policy changes.”

“If Elon students decided they wanted to back a particular candidate for town aldermans, for instance, in the town of Elon, they could pretty much pick who won,” he said. “Elon students have tremendous power at a local level if they decided to really pay attention to local politics and get involved.”

Truitt said he switched his voter registration to North Carolina because he grew more invested in the political issues going on locally.

“You need to get your voice heard,” Truitt said. “I think it’s a very important way just to show that as the American people, who we want representing our country and things like that.”

The latest Elon University poll from Oct. 29 showed North Carolina voters between 18 and 24 years old are concerned about how the election will be conducted and how the outcome will be received. Husser said while it’s a good thing more young voters are getting involved in the 2020 election, he’s concerned they could become disengaged.

“If the 2020 election goes sour –– there is violence after the election or there is widespread fraud or we don’t know who’s the winner for a month — you could have an entire generation who’s jaded about the electoral process for a generation or more to come,” Husser said.

Elon Votes expects to have full data on student voter turnout in March 2021, according to Podell.