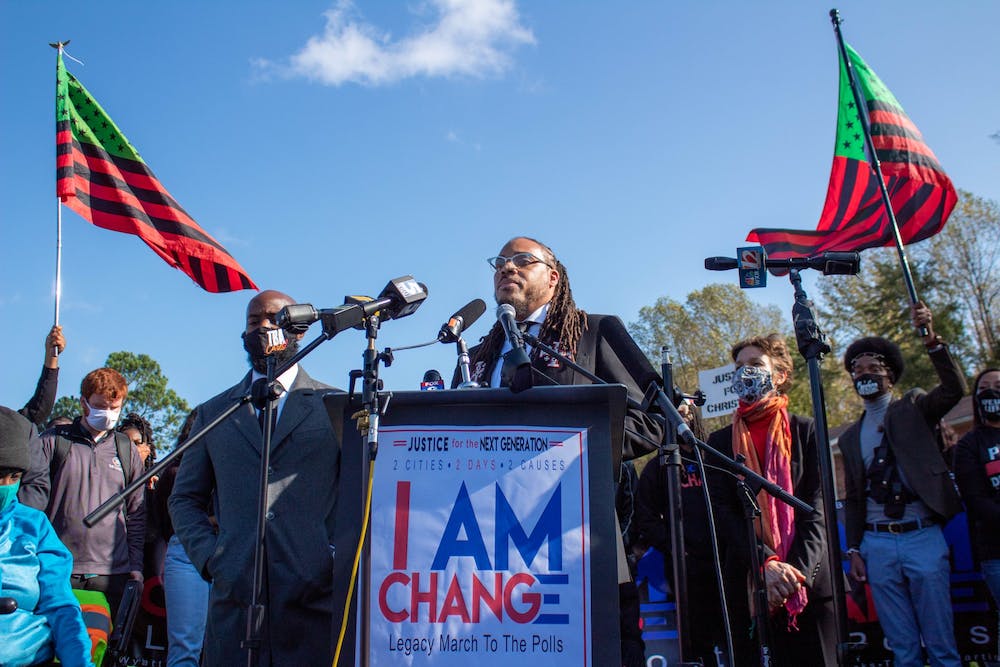 
The Rev. Greg Drumwright held a press conference on Nov. 3, the day after his arrest at the march to the polls event he organized in Graham. The march abruptly ended after Graham Police Department asked the crowd to disperse and began using pepper spray on attendees.

Following a march to the polls that ended abruptly after law enforcement clashed with peaceful protesters, both the Graham Police Department and the Rev. Greg Drumwright — the organizer of the march — held dueling press conferences.

Graham PD’s press conference was at 11:45 a.m. and Drumwright was at noon, but he pushed back the time because of Graham’s competing conference.

According to Lt. Daniel Sisk, the department did not authorize a road closure for the march because it would interfere with voters accessing the early voting location at the Alamance County Office Annex building.

Sisk said that the Graham PD used a pepper fogger on the ground as a means of crowd control. According to attendees, pepper spray was sprayed in their face.

“We gave numerous verbal commands. The only option other than using the mild irritant would have been physical force. And we did not want to physically force people out of the roadway,” Sisk said. “The mild irritant, like I said was exposed to the officers as well as the people, so it wasn't an extreme irritant.”

Marchers convened at the Confederate monument for eight minutes and forty-six seconds for a moment of silence honoring the life of George Floyd who was killed by a Minneapolis police officer this summer. Floyd's niece and nephew were suppose to speak at the march.

Drumwright and the marchers had a permit with the Alamance County Sheriff’s Office which allowed them to be on the courthouse grounds. According to Sisk, the Sheriff’s Office was responsible for security while Graham PD was responsible for traffic control. Following the marchers’ moment of silence for eight minutes and forty-six seconds, Graham PD gave the marcher until the nine minute mark to clear the roads. After warnings were given, Graham PD pepper sprayed the crowd.

Multiple attendees of the march said they saw children throwing up after the police began pepper spraying. Sisk said hearing that children were exposed to the spray was “unfortunate” and the department regrets that they were hurt, but they don’t have any regrets about how things were handled yesterday.

“There's disappointment,” Sisk said. “We were hoping to have a safe event. We wanted to have good coordination with the event coordinator. We wanted them to have a successful event.”

Rev. Drumwright held a press conference outside his childhood home in Burlington. According to Drumwright, the Graham Police and Sheriff’s Office response was an overreaction.

“What did we do that would warrant the use of excessive force and the use of pepper spray or tear gas upon our multigenerational, multiethnic, upon our community?” Drumwright said.

Drumwright emphasized that the march was peaceful, had proper permits, and communicated with the appropriate officials in advance. Drumwright is planning another march to the polls on Election Day morning, the purpose of this march is to show that Black votes matter, and to get Graham voters to the polls.

“There has never been a day in American history where Black votes have gotten the same equal access,” Drumwright said. "There are people that are pledging their support, changing their schedules."

Early voting is over in North Carolina. Drumwright is encouraging people outside of Graham to march to their own precinct.

"We need to do this now," he said. "We're asking people to organize in their precinct while we organize for the great people of Graham."

Saturday's march comes three months after Drumwright led a protest on the same street in downtown Graham four times the size of the march Saturday. No one was arrested or charged during that protest.

Standing behind Drumwright were marchers who were arrested, along with march organizers and participants. Among them were Elon students Tim Olson and Hannah Garcia, both arrested and charged with failure to disperse Saturday.

“I would probably not have the courage to do what I did yesterday but I was standing behind the stage with linked arms trying to ensure the people I found new love for [...] were ok.” Olson said.

Although Olson said he did not know the original intent of the march Saturday, he went to show his support.

“I do not regret my decision to stand there,” Olson said. “I just wanted to show up and stand for what I believe in.”

Elon junior Hannah Garcia, who was also arrested at the march yesterday, was at the press conference.

“Get out of the Elon bubble as fast as you can. You're going to be ignorant if you don't.” Garcia told Elon News Network.

Public officials have shared their support for the marchers in Graham and encouraged to vote. Burlington Mayor Ian Baltutis spoke at the conference.

"Through our love, passion and voting we reshape the community every day," Baltutis said.

After arriving in North Carolina for a campaign event on Sunday, Democratic Vice Presidential nominee Kamala Harris was asked about the march and resulting arrests. She said, “I don’t know a lot about it.”

When a reporter explained what happened, she said that everyone has the right to vote.

“I think it is very important that everyone be able to vote and without any hindrance, without any intimidation, without any obstacles,” Harris said.

Drumwright said more details about the election day event he is organizing are “forthcoming.”