For some residents of Alamance County, going to voting polls is not a single event, but rather a series of long visits to help them reach long-term goals or life missions 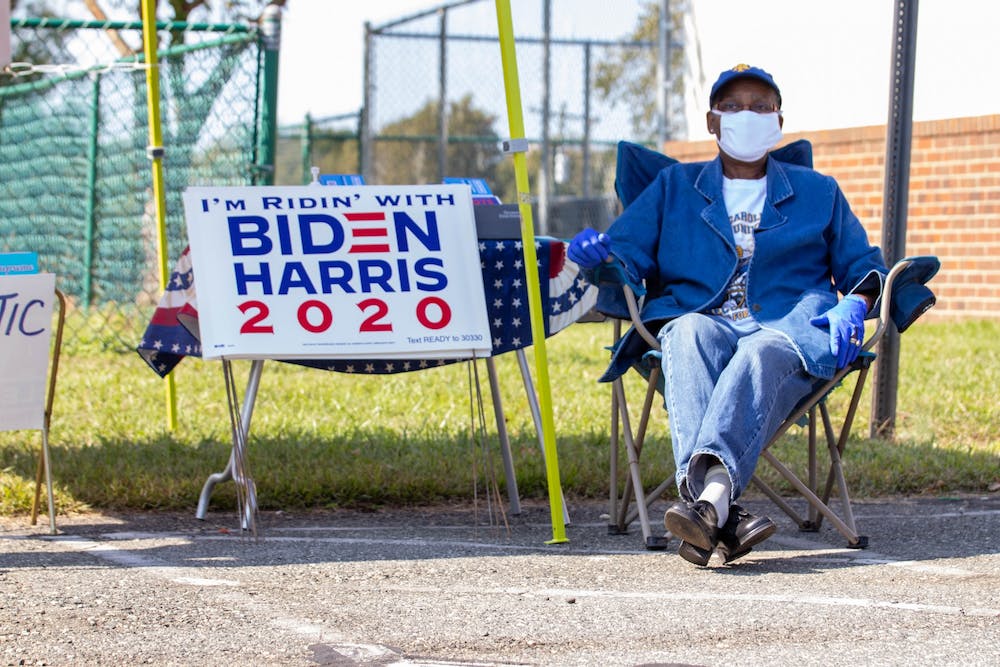 Adrianne Mowry sits in a lawn chair at the Holly Hill Mall ­— an Alamance County early voting location — greeting voters and asking passerbys if they have voted. There is a sea of political paraphernalia: red and blue pickets line the walls, people wear candidate T-shirts and there is even a cardboard cutout of one candidate. Mowry stands out in this group because her T-shirt and signs are green.

Mowry helps campaign for the North Carolina Green Party. She has been doing so for four years and is currently a delegate of the Green Party presidential nominating convention.

The early voting period and Election Day will look much different for her than a single trip to polls to cast a vote, as Mowry will be at the polls whenever she is not working.

Her goal for this election is to get 2% of North Carolinians to vote for Howie Hawkins and Angela Walker, the 2020 Green Party candidates for president and vice president. If they do not get the 2% or reach one of the other requirements spelled out in Senate Bill 656, it is not certain the candidates will be automatically on the ballot in the 2024 presidential election. They did not appear on the ballot in 2016.

Her pitch to voters is that the Green Party can offer what she calls the “whole enchilada” - a list of progressive items that include the Green New Deal, legalizing marijuana and defunding the police. Mowry said the two mainstream parties only offer some of these items — in her words, voters are only getting the enchilada “sauce.”

When working at the polls or campaigning for the Green Party, Mowry is often with only one other person or alone, but it doesn’t bother her.

“Being alone or being the only one, it doesn’t bother me at all,” Mowry said. “Because sometimes all it takes is one to make the difference.”

Mowry has voted for the Green Party her entire life despite only recently turning her efforts to campaigning for the party. She hopes to one day run for government once the Green Party is on the ballot in North Carolina.

“Unfortunately, because of the party that I’m in, it’s been rather hard. It’s difficult to either run for government or even get on ballot,” Mowry said.

The outcome of the election could help determine when she’ll have the opportunity to be on the ballot.

But until that opportunity arises, Mowry will keep going to the polls and meeting people.

“I will go to as many of them as possible up until Election Day, and be there trying to support the Green Party,” Mowry said.

Sadie Howard-Stanfield typically greets voters at the polls by saying she is on the ballot this year. Then when a voter inevitably asks what her name is or what race she is in, she follows up by saying “I’m right there” and points to Sen. Kamala Harris’s name. She laughs; so does the voter, usually.

Her interest in voting started with her grandmother when she was 6 years old.

“I had a grandmother when I was 6 years old that was really, really active in politics,” Howard-Stanfield said. “I’m the first grandchild, so guess what? I had to do, what grandma says, and grandma said always be a passionate person with everybody.’”

Even today at the polls, she keeps a motto close to her heart that her grandmother told her: “reach back, get one, teach one.”

As for why voting is so important to her, she said it teaches the way of life.

“Because a lot of times you’re not going to be living in the same place, and if you can go anywhere and if you know … to vote and people and issues and why it makes you a better person,” Howard-Stanfield said. “That means you got a Ph.D already.”

Howard-Stanfield will be working at the polls every day of early voting and Election Day with the goal of getting as many people as possible to go through the effort of voting. Howard-Stanfield said no matter what the elections results are, she plans to continue to work at polls. The final day of voting in North Carolina is Election Day, Nov. 3. The outcome will affect all three in different ways.