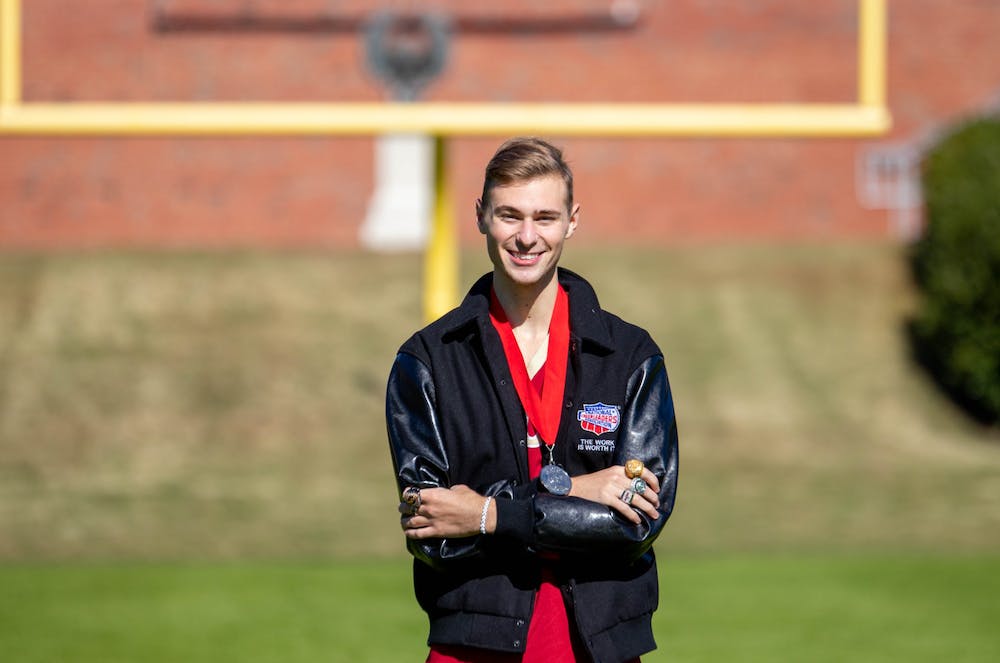 Cheering extends beyond the sidelines of Elon University football and basketball games and into other facets of life for senior Zach Wallace. He started cheerleading in 2011 while he was in middle school and became enamored with the sport.

“I just fell in love with it,” Wallace said. “I love the stunting aspect of it. And just being around with all your teammates, I think practicing with teammates and becoming a family was one of the biggest things that I fell in love with.”

Wallace is a skilled cheerleader and trains at the highest level in the sport on the national level. During his nine years cheering, Wallace has been to The Cheerleading Worlds — an annual international cheerleading competition — six times, placing second twice: once with as a part of the Cheer Athletics team Swooshcats in 2018 in the International Small Coed division and again in 2019 as a coach in the Large All-Girl division.

When he was thinking about what college he would go to, Wallace knew he wanted to continue his cheer career and looked for a school close to Cheer Extreme in Kernersville, North Carolina. With the gym 40 minutes away, Wallace decided to attend Elon. Wallace started cheering as a part of their All Star team his freshman year at Elon and later began to work as a coach at the gym his junior year.

Wallace joined the Elon cheerleading team his sophomore year. Although he has cheered on the mat at several international cheerleading competitions, his favorite place to cheer is at Elon football games.

“Football games are my absolute favorite. It’s just, it’s fun. It’s stress-free except when the score is close. You just get to go out there and yell as loud as you can and have a great time,” Wallace said.

Elon head cheerleading coach Susan Turner said Wallace is a role model for everyone that is a part of the squad.

“Zach doesn’t meet a stranger. Usually, the guys and girls alike really look to him for advice, for leadership, for guidance,” Turner said. “He’s super talented and everybody knows that he’s non-threatening to people, and the team members automatically respect him and look up to him for advice.”

A stretch beyond ordinary

Prior to the COVID-19 pandemic, Wallace dedicated around 40 hours a week to cheerleading.

On Monday, Wednesday and Friday, Wallace would spend five and a half hours each night at Cheer Extreme, coaching and practicing from 4 p.m. to 9:30 p.m. Wallace devoted his Tuesdays and Thursdays to Elon cheer practices, training for three hours each night from 5 p.m. to 8 p.m. During the weekend, Wallace would go into the gym early for nine and a half hours, arriving at 10 a.m. and leaving at 7:30 p.m.

To balance his schedule, Wallace takes only three classes a semester. But even with this smaller course load, Wallace has to spend late nights to get his work done, usually staying up until 1 or 2 a.m. When day breaks, Wallace goes to his first class at 8 a.m before he goes to cheer in the afternoon. Wallace also takes Winter Term and summer classes so that he can complete his credits on time.

In hopes of getting first place at The Cheerleading Worlds, Wallace decided to take a gap year in Texas after his freshman year at Elon to train as a part of the all-stars team Cheer Athletics.

“I moved my whole life to Texas in like two weeks. I just randomly did it,” Wallace said.

After placing second at The Cheerleading Worlds that year, Wallace moved back to Elon to begin his sophomore year.

Wallace said that his passion for cheer is what keeps him motivated to spend long days and nights cheering and doing homework.

“I call it to work, but like, it’s really fun. Like it’s, it doesn’t feel like work 90% of the time. It just feels like I’m going and getting to do what I love to do and get paid for it. It’s kinda great,” Wallace said.

Once Wallace graduates, he said that he hopes to combine his communications design major and his cheerleading background into his career.

“I can kind of integrate it into both if I want it to. There’s a lot of design aspects of cheerleading when it comes to uniforms or just t-shirt design like logos for gyms. And there are some huge companies like Varsity and Rebel Athletics that need designers,” Wallace said.

Wallace is dedicated to everything he does both in and outside of his life as a cheerleader, Turner said.

“As a cheerleader and a person on my team, as well as a person and an individual, he gives a hundred percent to everything that he does,” Turner said.