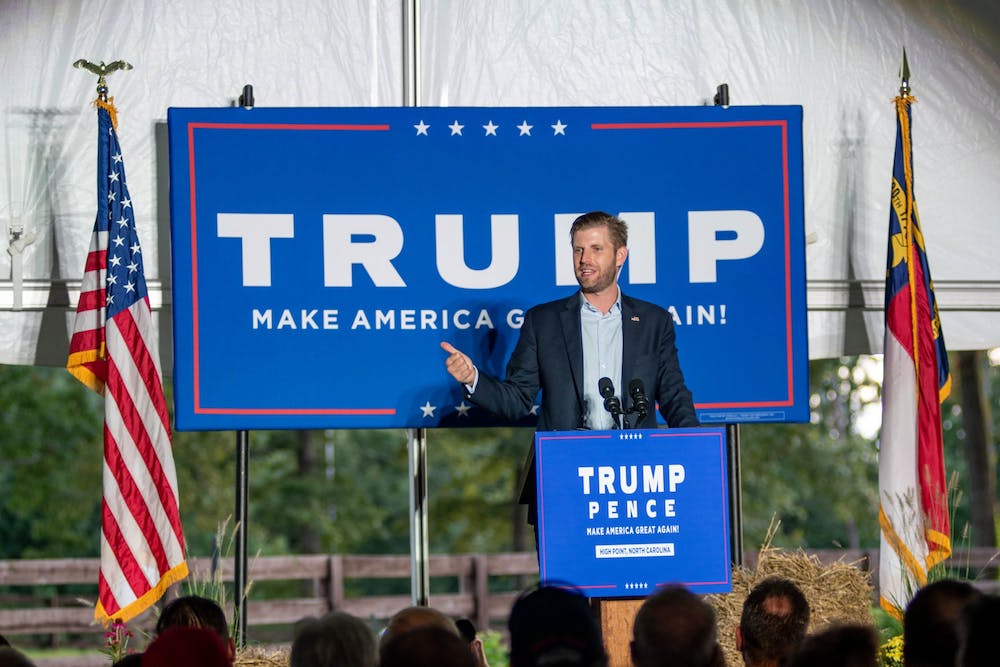 HIGH POINT — Eric Trump — the son of President Donald Trump — spoke to supporters of the president’s reelection campaign at a horse stable in High Point Wednesday.

Eric Trump claimed the incompetence of the Democratic Party will ultimately lead to the reelection of his father. Trump also claimed — while gesturing to the seats closest in front of him — that former Democratic President John F. Kennedy would have supported President Trump.

“I think this whole country is loving Republicans after seeing the lunacy of the other side right now,” Trump said. “I firmly believe JFK would be solidly sitting like in that front seat.”

The event took place at A.A. Stables, less than 30 miles away from Elon University’s campus. Eric Trump's visit comes one day after the president’s rally that was met with supporters and protests at the Smith-Reynolds Regional Airport in Winston-Salem Tuesday night.

Katie Riedel and her daughter attended the event. Riedel said she’s supporting the president’s decision to open the economy and schools as soon as possible, despite the ongoing coronavirus pandemic.

“It’s impacted us a lot because her grandparents have not been able to spend this much time with her as we’d like,” Riedel said. “Really just looking for everything opened again.”

North Carolina recently entered Phase 2.5 of coronavirus reopening — which will allow for larger gatherings, expanding the number of people allowed indoors to 25 and 50 people outdoors.

Another supporter and attendee — Brent Bull — said he is visiting his brother just around the corner from the event. Bull said he supports the president’s decision to reopen and claims the coronavirus isn't as bad as people think.

“Nothing worse than the cold or the flu,” Bull said. “I’ve been traveling across the country for the last six months, I haven't seen it, I haven't had a problem.”

The claim that the coronavirus isn't worse than the seasonal flu has been refuted by President Trump himself, according to a book by Washington Post Associate Editor Bob Woodward.

Baylor Rodman and Grace Terry contributed to the reporting of this story.