North Carolina to move into Phase 2.5 of reopening this week

In a press conference this afternoon Gov. Roy Cooper announced new guidelines related to the next phase of coronavirus reopenings, which will go into effect on Sept. 4 at 5 p.m. 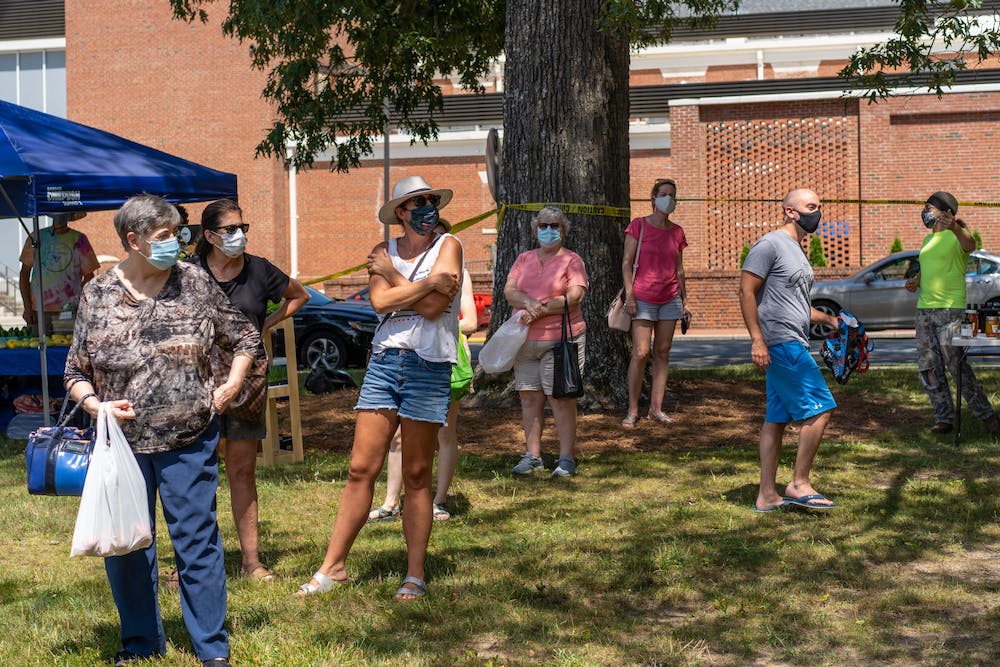 Photo by Clare Grant | Elon News Network
Members of and around the Elon community gather in Downtown Elon at the Farmers Market while following safety guidelines on July 2, 2020.

North Carolina will be moving to Phase 2.5 beginning on Friday, Sept. 4 at 5 p.m., Gov. Roy Cooper said at a press briefing today.

This move will allow for larger gatherings, expanding the number of people allowed indoors to 25 and 50 people outdoors. Playgrounds, museums and aquariums will also open in Phase 2.5 at 50% capacity.

The governor also announced that gyms will be allowed to open at 30% capacity. Bars, nightclubs, movie theaters, amusement parks and indoor entertainment facilities will remain closed.

“Large venues will still be subject to the mass gathering limits,” Cooper said. “We know big gatherings are among the most dangerous settings for transmission of this deadly virus.”

Cooper also said the alcohol sale curfew of 11 p.m. will be extended to Oct. 2.

According to the governor, one of the reasons for moving towards Phase 2.5 is to help the economy.

“We also want to do things to spur our economy, to encourage people to exercise at the same time,” Cooper said. “This is a dimmer switch, [a] careful step that we are making.”

Although North Carolina’s numbers have been stabilizing, both Cooper and North Carolina Secretary of Health and Human Services Mandy Cohen said there was a spike after colleges and schools began to reopen in August.

“When our college and universities opened their campuses, we did see outbreaks and an increase in cases,” Cooper said. “Some pivoted to full online learning, and after several weeks of students back in the classroom, we’ve continued to see our statewide numbers stabilize.”

Cohen said she recommends that colleges and universities keep students who have positive cases on campus, rather than sending them home.

“As far as keeping students on campus if they’re positive, that is very much in line with our guidance,” Cohen said. “We want to make sure that virus is able to be contained and that it doesn’t go into the community.”