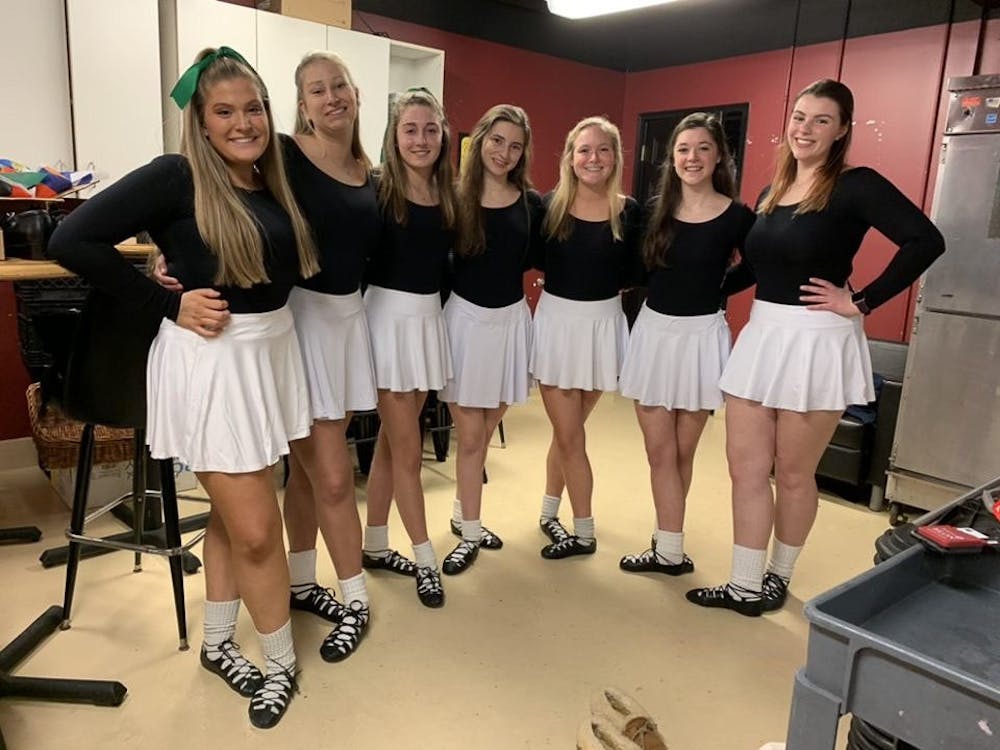 Members of the Irish step club get ready to perform at the International Food and Dance Festival, which was hosted by the Elon International Society in March 2020. Photo courtesy of Elizabeth Mitchell

Hands on her hips, Elon junior Ellie Mitchell alternated between light kicking and agile jumps while on stage alongside her peers, the rest of the Elon Irish Step Dancing Team. While the spotlights’ beam descended onto their costumes at the 2020 Spring Relay for Life, the team soaked up the audience’s praise. After the celebratory dance concluded, Mitchell took a moment to observe how the team’s hard work paid off in the crowd’s reaction.

Mitchell and Kate Batchelder, a junior on the team, both regard the most memorable part of that evening as feeling the energy from the crowd post-performance.

“It was our first time in front of an audience that semester and we had so many new members, so getting to perform all together for the first time was so much fun,” Batchelder said. “So many of our friends came to support us and relay, and it was a lot of fun for a great cause.”

Mitchell also shares similar regards about the team’s performance at Relay for Life.

“[Relay for Life] was our first performance of the new year, and we were very excited to show off some of our new routines,” Mitchell said. “We saw lots of our friends from the crowd, which was very fun for them to cheer us on. It is always exciting for us to perform for our peers and put on a good show. We were really proud of ourselves and how our performance went after many hours of practice before.”

"It is always exciting for us to perform for our peers and put on a good show. We were really proud of ourselves and how our performance went after many hours of practice before."

Irish dancing consists of a combination of rapid footwork and a still upper body. It is based on traditional Celtic dance forms. In Ireland, the dance is a means of expressing nationalism. It grew in prominence in the late 19th century when many Irish people immigrated to America.

Mitchell and Batchelder both described the preparation for performances as a communal effort. All members are welcome to create their own routines and pitch ideas for the performance.

“We do all our own choreography,” Batchelder said. “We get together in the studio and choose music, and then anyone can suggest ideas. Our dances are bits and pieces of everyone’s ideas, which is really fun when it all comes together.”

While the Irish Step Dancing Team does not compete, they do perform each semester at events around Elon’s campus. Since her freshman year, Mitchell said she has seen very few changes to the team other than minor changes in routine and choreography. The team’s relaxed environment is one of the aspects that drew in Batchelder.

“I don’t think the team presents many challenges, which is what’s so nice about it,” Batchelder said. “We understand that some weeks are just busy, and we don’t make practices or performances mandatory so everyone can just have fun.”

This semester, however, does pose the challenge of how to practice from a distance. Mitchell said that while there are not any concrete plans yet, there will still be opportunities for people to participate on the team.

“My favorite part is performing for people and putting a smile on their face,” Mitchell said. “I joined the dance team here freshman year because I wanted to continue my passion for dance and thought it would be a nice way to make friends who share the same passion as me.”

While both Mitchell and Batchelder have years of experience in Irish dancing, they said that the team welcomes newcomers of varying experience.

“I think the best part of being on the team is the friendships we’ve made. We love hanging out together at practice, going out to get ice cream together, or watching movies,” Batchelder said. “We have dancers from all skill levels and we love being able to perform for fun without the pressure.”