In the first meeting of the 2020-2021 council, SGA swears in a new executive and senators 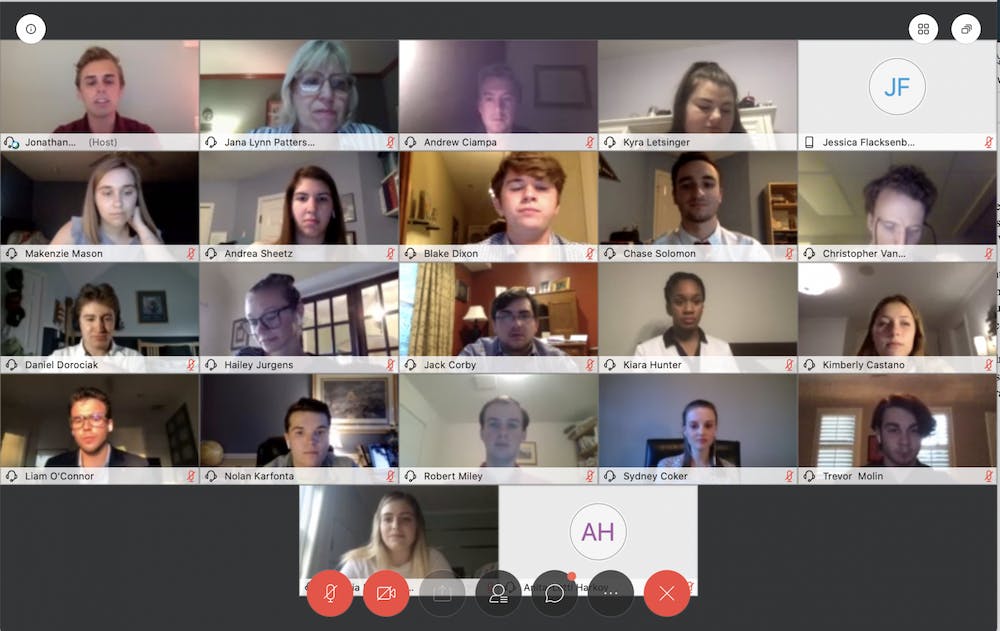 Elon University's Student Government Association held its first virtual meeting with the newly sworn-in executive council and new senate members via WebEx. The business meeting was held virtually as in-person classes are suspended for the remainder of the semester amid the coronavirus pandemic.

While the executive council was sworn in early before spring break due to classes going remote, the elected senators were sworn in by SGA Executive President Robbie Miley.

“Our peers elected us to be in our respective positions,” Miley said. “Given our campus climate, it’s more important than ever to be the elected officials they selected us to be.”

Jana Lynn Patterson, associate vice president for student life, gave an update on Elon University’s response to the coronavirus in her adviser’s report. According to Patterson, the university’s emergency operations command center is still meeting daily and has moved toward planning university operations for the summer and fall.

Patterson said classes for the summer will be online only, but the university is planning on a full residential opening for fall 2020. As for a refund or reimbursement for housing this spring, Patterson said Elon administration is still planning out what that looks like, but information will be made available in the “next couple of weeks.”

“We want to make sure the systems are good to go and we have it right and ready,” Patterson said.

According to Patterson, there are about 400 students currently staying in campus-owned and operated facilities — mainly apartments.

In other business at the meeting, SGA passed 17-0 amendments on its Judicial Manual and By-Laws. The amendments to both documents adjust the operational functions of SGA.

One amendment to the By-Laws requires every member of SGA to serve on the Project Task Force, a move Executive Vice President Jonathan Stettler said aligns with SGA’s goals to “tackle big projects on the campus.”

The amendment to the Judicial Manual clarifies what is considered an excused absence from an SGA meeting.

Excused absences can be  “due to an athletic event, academic commitment, religious observance, or family/medical emergency,” and must be properly documented and notified before the member plans to be absent.