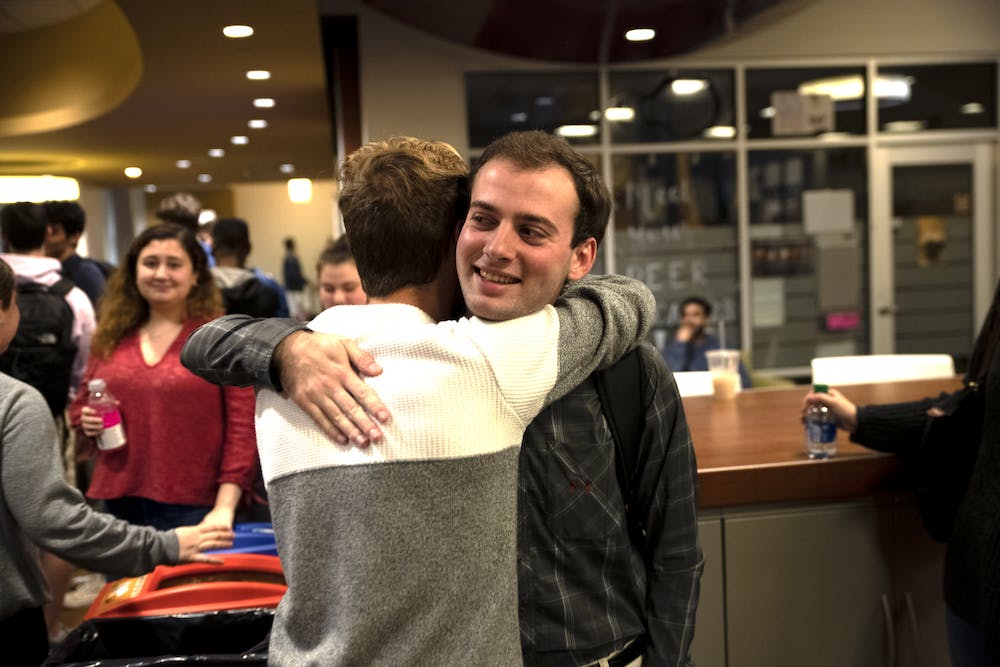 Photo by Thomas Denome | Elon News Network
Robert Miley receives a hug after being named the executive president of the Student Government Association on March 3, 2020.

Junior Robbie Miley will be the next executive president of the Student Government Association.

“I'm on cloud nine right now, I'm so excited,” Miley said immediately after the vote. “I've been a part of this organization for two years. I've really put my all into this, and in this position I can really make a big impact.”

Miley, the current class of 2021 vice president, said he is looking forward to bridging the student body and the administration.

“In this position, you don’t necessarily have a lot of power, per se, but you do have a lot of influence and ability to get things done,” Miley said.

Miley said his first order of business will be to fill the vacant positions in the SGA senate. There are six positions still available, including executive secretary.

"I want to work with the executive vice president and treasurer to make sure it's someone that we all feel comfortable working with," Miley said on an appearance on Elon News Network's Super Tuesday Election Special. "I also haven't talked to Brandon directly so I don't know exactly what his plans are, but he's definitely someone I would be willing to consider."

According to Miley, he plans to reach out to different clubs and organizations in search of candidates. The rest of Miley’s cabinet has been filled.

The race for executive treasurer was uncontested, so junior Andrew Ciampa will be taking the position.

The executive board will be sworn in during the Leo Lambert Awards Ceremony on Tuesday, March 31 at 5 p.m. in McKinnon Hall in Moseley Center.

Candidates, SGA members and other students gathered in downstairs Moseley Center for the announcement of the victors on Tuesday, March 3. The winners of the other races were also announced.

Jessica Flacksenburg and Kyra Letsinger both ran unopposed, and will assume the positions of president and class senator respectively for the class of 2021. The positions of vice president, secretary, treasurer and second senator are vacant.

The class of 2022 will be represented by Hailey Jurgens as president, Daniel Dorociak as vice president and Jack Corby as treasurer. All three ran unopposed. Five sophomores ran for the two senator positions for the class of 2022, making it the most contentious race this election. Liam O’Connor and Andrea Sheetz won the positions.

Chase Solomon unseated Jumar Martin as the president of the class of 2023 by 21 votes. The positions of vice president, secretary and treasurer will be filled by Trevor Molin, Kimberly Castano and Kiara Hunter, who all ran unopposed. Blake Dixon and Victoria Burfield won the two senator seats.

The class and academic council members will be sworn in on the first business meeting of the new legislative term in April. There is currently no deadline for when the vacancies will need to be filled.