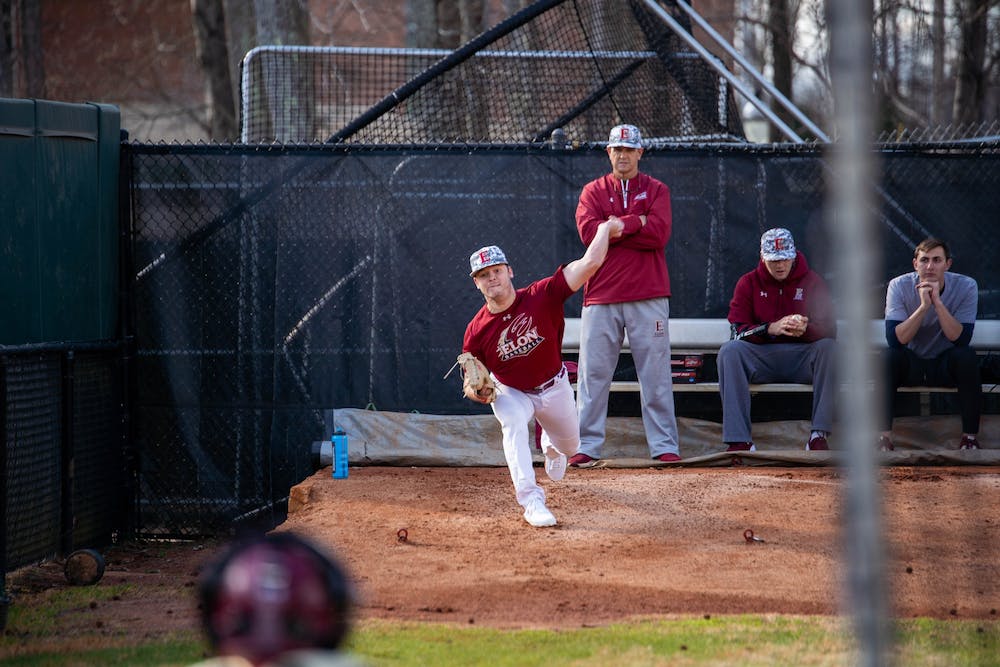 On a windy Friday afternoon, a week from the start of his 24th season as the head coach of Elon University’s baseball team, Mike Kennedy began practice with a walk to the bullpen to see junior starting pitcher Jared Wetherbee warm up.

Wetherbee became a full-time starter in March 2019 and is the only returning pitcher from last year’s rotation.

Kennedy said he is looking to fill the holes in his pitching staff left by the 2019 Major League Baseball Draft after two starting pitchers and one reliever signed professional baseball contracts; George Kirby and Ty Adcock were drafted by the Seattle Mariners, and Kyle Brnovich was drafted by the Los Angeles Angels before being traded to the Baltimore Orioles in December.

During the 2019 season, Brnovich and Kirby threw a combined total of more than 174 innings in 28 starts. The duo also took the mound for 15 of the team’s 33 wins.

Is the number of wins that Kyle Brnovich, Ty Adcock and George Kirby combined for when starting for the Phoenix in 2019. That accounts for more than half of the team's 33 wins last season.

Adcock served as the team’s closer last season and recorded nine saves to go along with 37 strikeouts in 21 appearances.

While Kennedy was thrilled for the trio of pitchers, he said their departures created a new challenge for the 2020 season.

“We were excited for those guys and the opportunity that they’ve been presented with, and that comes with working hard and having some success,” Kennedy said. “It creates a little bit of a hole for us on the mound in terms of experience. We’ll have some talented guys, but they’re going to be very young and lack Division I pitching experience.”

As the roster is currently constructed, the Phoenix has nine returning pitchers and nine new additions to the pitching staff. As the season moves forward, Kennedy said he hopes to see progress among the new pitchers.

"The goal is to have these guys continue to grow throughout the season, and as long as we're getting better and better over the course of the year then we'll feel good about it."

“The goal is to have these guys continue to grow throughout the season, and as long as we’re getting better and better over the course of the year, then we’ll feel good about it,” Kennedy said.

The Phoenix will debut its new pitching rotation against Delaware State University for the team’s home opener at 4 p.m. on Friday, Feb. 14, at Latham Park.

During opening weekend, Kennedy said he will start Wetherbee on Friday, freshman Spencer Bauer on Saturday and senior Dean McCarthy on Sunday.

Sophomore Joe Sprake, Kennedy said, might fill Adcock’s shoes as the new closer. He spoke similarly of Bauer, McCarthy and Sprake as they take on new roles during the season.

“All three of those guys will have to step up and assume roles that they’re not used to being in. And for us to be successful, they’re going to have to do a good job,” Kennedy said.

McCarthy appeared in 28 games last season, 27 of which were relief appearances. McCarthy said being a weekend starter is a “humbling role,” as it has been a goal of his for a long time.

“From struggling freshman year to my senior year, kind of finishing strong and earning that role, I think it’s very exciting, and I’m excited to lead our team,” McCarthy said.

As an experienced member of the team, McCarthy spoke of his struggle transitioning from high school to college baseball and how he intends to mentor new members.

“It’s important for me to support those guys, especially the younger guys,” McCarthy said. “I’ll try to help their mental side, keep them focused.”

The roles of the coaching staff have also shifted. After two seasons with the Phoenix, assistant coach Sean McGrath left the team and, according to The Seattle Times, was hired as the pitching coach for the Modesto Nuts, a minor league affiliate of the Seattle Mariners.

During McGrath’s time at Elon, he also served as the pitching coach. Kennedy said that he will work with the pitching staff this season in place of McGrath, which will limit his time with other players on the team.

“Things are going well. Guys are working hard and getting better,” Kennedy said. “I’ve seen less of our position guys because of it, but we’re rolling right along. Implementing some things that we did in the past. It’s just me being down there with them.”