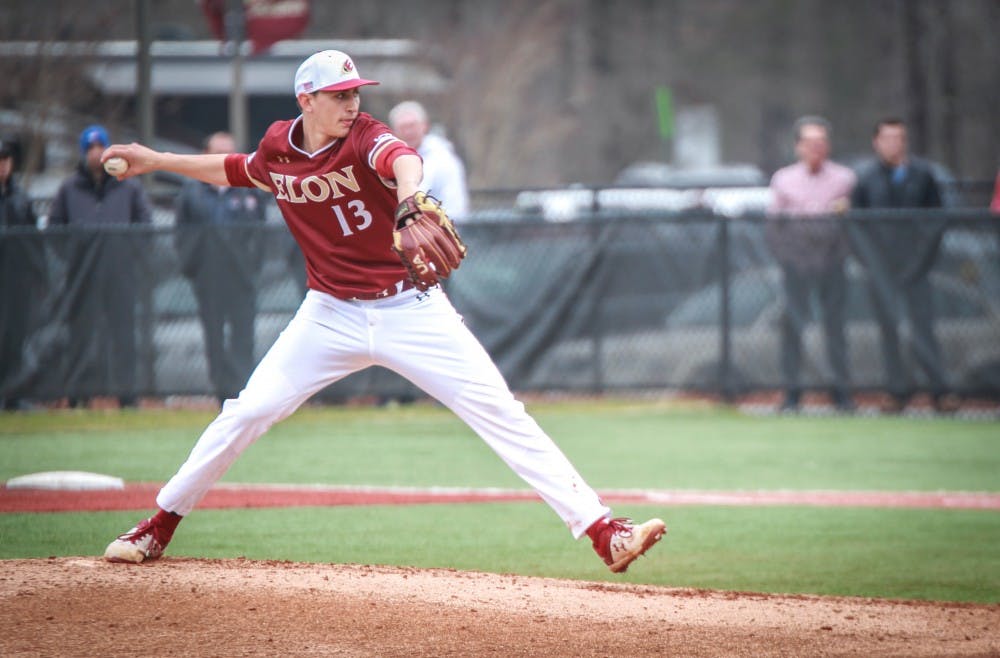 Photo by Abby Gibbs | Elon News Network
Junior pitcher George Kirby throws the ball in the first game of the doubleheader against Bryant University on Sunday, March 10. The Phoenix ultimately split games with the Bulldogs.

Elon University pitcher George Kirby is heading to the Seattle Mariners after being selected with the number 20 pick in the first round of the 2019 Major League Baseball Draft.

This is not the first time that Kirby has been drafted by a major league club. He was drafted by the New York Mets in Round 32 of the 2016 MLB Draft, but opted to attend Elon.

Kirby finished his Elon career with an impressive array of awards. The right-hander was CAA Colonial Athletic Association (CAA) Pitcher of the Week three times, was named First-Team All-CAA, and was named CAA Pitcher of the Year for 2019. Kirby collected eight wins in 2019, and struck out 107 in over 88 innings. Kirby also displayed strong command, walking only six hitters in 14 appearances.

In addition to Kirby’s impressive statistics, he also was part of a pitching rotation that helped propel the Phoenix to its first ever CAA regular season championship. The team made it to the championship game of the CAA tournament, but fell to University of North Carolina Wilmington.

With the addition of Kirby, this is the second year in a row Seattle has drafted an Elon player. Second baseman Ryne Ogren was drafted by the Mariners on June 6, 2018 in the 12th round (pick 358 overall).

According to MLB.com, Kirby ranked 18 in the top 200 draft prospects. With Kirby off the draft board, there are now only two Elon players left from the top 200 prospect list: pitchers Kyle Brnovich and Ty Adcock. The duo of pitchers were ranked 185 and 186 respectively.