A look into the removal and reinstatement process for greek organizations 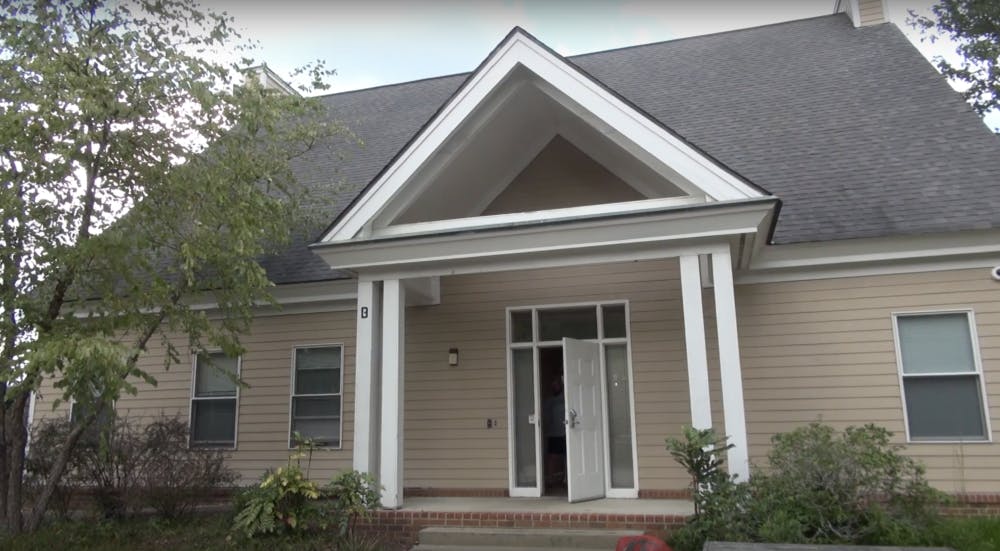 
Kappa Sigma's former on-campus house in Loy Center. The letters and name of the fraternity were removed on Tuesday, Sept. 17.

It has been two weeks since the Kappa Sigma fraternity was forced to leave campus after its international headquarters revoked the charter for the Kappa Sigma Lambda Lambda chapter at Elon University.

“None of us wanted this to happen. Every member is extremely disappointed in the route Kappa Sigma HQ decided to take in regards to the Lambda Lambda chapter,” said senior Sam Olson, former president of Kappa Sigma.

In response to Kappa Sigma’s removal, the Office of University Communications released a statement explaining why the decision was made.

“The decision comes after the Elon Kappa Sigma chapter was found responsible for multiple Honor Code violations last spring, including incidents of disorderly conduct, unauthorized use of alcohol, compromising the well-being and academics of new members and destruction and defacing property.”

Without recognition from Kappa Sigma nationals, Elon University could no longer recognize this chapter as a registered on-campus organization.

According to the international headquarters, students formerly associated with Kappa Sigma have until the end of October to appeal the decision. However, Olson said they have no plans to make the appeal after all of the organizations members either resigned or were expelled.

Even though the removal of Kappa Sigma from campus came from the national headquarters and not Elon University, the process of getting removed or suspended from campus is usually lengthy.

King declined to elaborate on the ongoing situation with Kappa Sigma, but he did provide details on the probation and removal process for a Greek organization from campus, as well as the process for becoming a recognized organization.

King said part of this educational process includes putting fraternities and sororities on probation when in violation of university policy. Unique sanctions are implemented and tailored toward the organization’s violation.

“The intent is never to suspend a chapter,” King said. “That is not ever first, sort of, priority or the first step.”

Sanctions can include everything from alcohol-free social functions to required educational workshops.

According to the Office of Student Conduct, currently there are two Greek organizations with disciplinary status: Kappa Alpha Order, which had members participating in hazing events last spring, and Sigma Chi, where “members of the organization participated and instigated a physical fight directed toward others” last winter.

However, probation periods don’t always end positively for fraternities and sororities. Since spring 2015, Lambda Chi Alpha and Pi Kappa Phi, now known as “Old Pi Kapp,” have become two other organizations unrecognized by the university after “significant violations” of the Elon Honor Code.

According to King, student involvement typically provides an organization with a timeline of three to four years before Elon and the national chapter of an organization can reopen lines of communication.

“Everybody is usually on board with saying we want to make sure that if we are going to reestablish a chapter, we want to set them up for success,” King said. “And typically, that means giving at least a few years before we’re able to bring them back so they can start fresh.”

For both new and returning Greek organizations within the Interfraternity Council, which represents nine of the 13 nationally recognized social fraternities on campus, recruiters from the national organization will typically come to campus to recruit individuals for the first new pledge class of the organization.

When these organizations are first established on campus, they are referred to as a colony rather than a chapter. During this period, the organization works toward meeting goals for membership, programming and finances.

The process of becoming chartered can take between two to three years before an organization is able to hold a ceremony and become an official chapter on campus. Becoming official means that the organization has voting rights on the Interfraternity Council.

Currently in the midst of this process is the colony known as “New Pi Kapp.” In spring 2018, recruiters from Pi Kappa Phi International met with interested students and offered bids for membership, beginning the process of officially returning to campus and becoming a chapter.

“Being a brand-new fraternity is hard, but it is also fun because we kind of get to make it what we want,” said senior Gray Bowline, president of Pi Kappa Phi. “Everyone in my grade is trying to get us in the right direction.”

Bowline said his fraternity is constantly working to seek approval from nationals in order to become recognized as a full chapter.