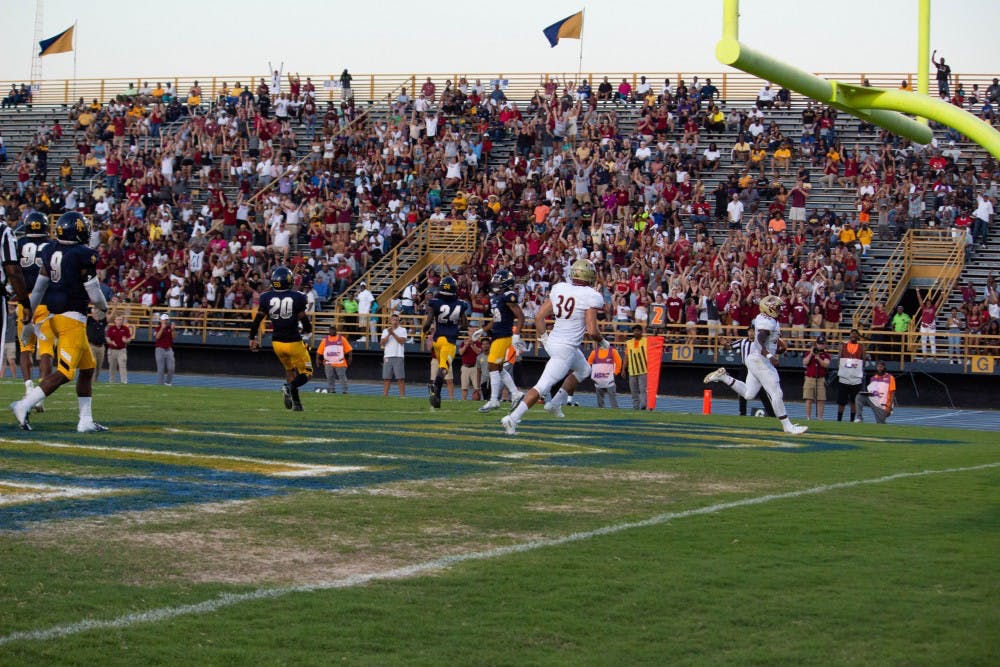 The Elon University Phoenix lost to North Carolina A&T Aggies 24-21. The first time the Phoenix have played the Aggies since 2015 also serves as Tony Trisciani’s first season opener as the head coach.

"It's a tough one to lose on, but you let us think for our 24 [hours] and then you gotta move on because we have more football to play," junior quarterback Davis Cheek said.

"You gotta move on because we have more football to play."

The Phoenix new defense led by Billy Crocker showed promise in the Aggies first possession, keeping them scoreless as well as shutting down a touchdown promising throw by graduate quarterback Kylil Carter. Redshirt junior linebacker Stephen Copeland also made quick work on the defensive line, sacking Carter for a loss of seven to end their first possession.

On the Phoenix’s second possession, Cheek spearheaded a terrific drive starting from the Elon 31 yard line. Senior running back De’Sean McNair ran the ball in for a five yard rush to get the Phoenix up on the board first, and sophomore kicker Skyler Davis kicked the extra point to give the Phoenix a 7-0 lead. The Aggies answered back with a run of their own to get them to the Aggies 48 yard line to end the first quarter.

The Aggies started off the second quarter strong, scoring on their continued possession to tie the game up 7-7. After getting on the board, the Aggies seemed to control the rest of the second quarter. The Aggies kept Elon to a five-play possession before scoring again to push them ahead. Senior wide receiver Elijah Bell hauled in the five yard pass to make him the A&T touchdown reception record holder, with 26 in his career. The Phoenix would not get on the board again in the first half. Cheek was sacked twice in their final possession of the half.

The Phoenix opened up the second half with another promising run, marching down 75 yards until McNair completed his second touchdown of the day. Davis’ extra point tied up the game, 14-14.

What would’ve been a one-two-three-four victory for the defense turned into a special team error when Elon fumbled the return and gave the ball back up the Aggies on the Aggie 48 yard line. The error was capitalized by the Aggie redshirt sophomore tight end Quinzel Lockhart, who caught a ten yard pass to push them ahead of the Phoenix once again.

"Our defense was resilient. There were a couple of drives that they were out on the field for a long time but they dug their heels in there and got some key stops," Trisciani said. "We're going to go back and we got some corrections to make, and from an execution assignment standpoint, we will be a better football team for the next game."

On Elon’s next possession, Cheek completed a 31 yard pass to sophomore wide receiver Bryson Daughtry that catapulted the Phoenix to their third touchdown of the day. Junior wide receiver Kortez Weeks completed a 14 yard pass from Cheek, and with Davis’ successful extra point, the game was tied up 21-21 going into the fourth quarter.

The fourth quarter consisted of constant back and forth play. Junior kicker Noel Ruiz attempted a field goal from 43 yards away that went wide and left, and gave the Phoenix another chance to get more points on the board. Another sack on Cheek caused the Phoenix to punt the ball, but the

Ruiz had yet another chance to put A&T up in another field goal attempt, this time from 40 yards out. But, just like the last attempt, he went wide and left, leaving the game still tied at 21-21. The Phoenix’s possession following proved to be unsuccessful again, and forced the Phoenix to punt the ball back to the Aggies. The return put the Aggies up to the Elon 38 yard line, and with less than 30 second left in the fourth quarter, the Aggies pushed to string together a game winning drive.

A four yard rush would get the Aggies to 34 yard line, and with nine seconds remaining, Carter threw around a 40 yard pass down into the end zone where junior wide receiver Korey Banks was waiting, but was unable to come down with the ball in bounds.

With now one second remaining in the game, Aggies head coach Sam Washington decided to give Ruiz the chance to win the game, this time from 51 yards.

Third time was the charm for Ruiz, who straightened out his kick for a good field goal, and the Aggies bench ran onto the field to celebrate.

Senior defensive lineman Marcus Willoughby said, "there was no relaxation, you can miss two, you can miss as many as you want, but if he made that one, which he did, it doesn't matter."

One of the highlights of the night was the return of quarterback Cheek, who came back after a season ending ACL tear last season. Cheek didn't have much time in the pocket, with the Aggies recording five sacks. Trisciani commended Cheek's character for not getting frustrated and said

"Davis is tough so he's going to play every snap of the game and so is everybody else in that locker room. That's the kind of football team we are, this team has got a lot of grit."

Cheek was not so willing to let himself off easy, and said that he has to keep working on his game along with the rest of the team. "I know one thing's for sure is that those sacks, they're not all on the o-line, they're a lot more on me. I've got to do a better job of getting the ball out of my hands and I got to throw it away when I can," Cheek said.

The Phoenix will next play The Citadel Bulldogs (0-1). This game will be the first home game for the Phoenix, and for Cheek, will be a homecoming from his time away from the sport.

"I just want there to be as much fans as possible, that's the best when fans pack Rhodes Stadium," says Cheek. "If we can get the fans out there that would be the best thing we could do because the fans' support, it's huge, it means more to us than everyone realizes."