Constructing a legacy of leadership 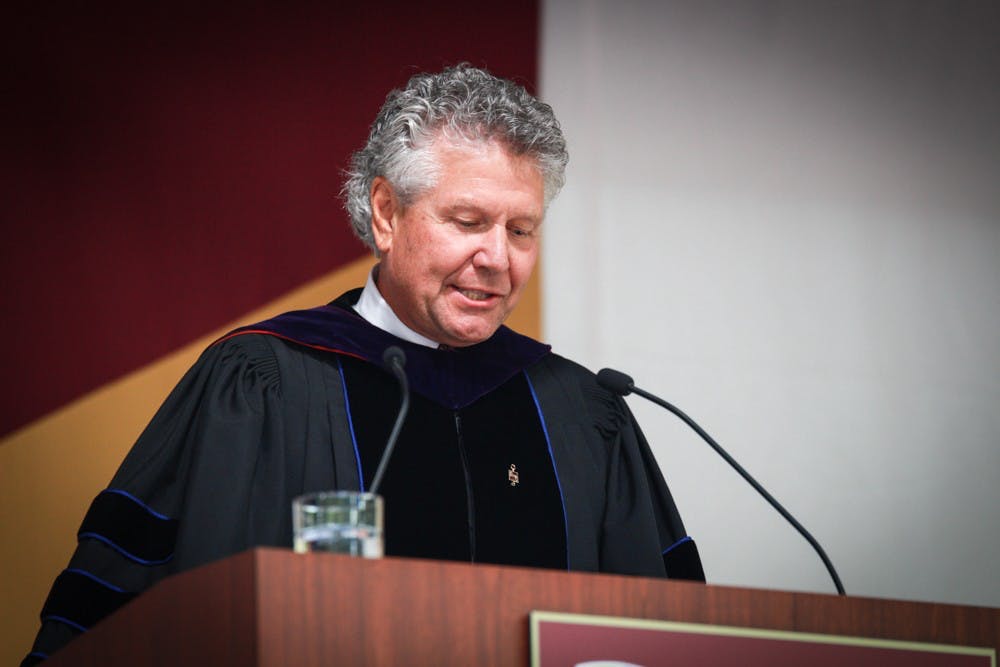 When Provost Steven House arrived at Elon University in 2001, he was given one piece of advice from the former provost: don’t break anything. While holding on to that wisdom for the past 18 years, House has not left the university as he found it. House looked beyond not breaking anything, and he started building.

House is known as one of the cornerstone figures of the university, and he has laid the foundation for success across campus. He has spent years overseeing all of Elon’s academic programs and partnering with the departments of student life, admissions and athletics. House made Elon a home for thousands of students.

Now he is stepping down from his position — making way for someone else to fill it.

After House left his position at Seton Hall University, he kickstarted his career at Elon as the founding dean of the College of Arts and Sciences. He was promoted to vice president for academic affairs and provost in 2009 and took on the additional role of executive vice president in 2015.

“I got into this line of work in higher education because of my desire to be a teacher and scholar, and while I don’t get to do that on a day-to-day basis, I still get to interact with people who are doing that,” House said. “The greatest joy I have is to help create an environment that helps the faculty to work really closely with students and to transform their lives.”

"THE GrEATEST JOY I HAVE IS TO HELP CREATE AN ENVIRONMENT THAT HELPS THE FACULTY TO WORK REALLY CLOSELY WITH STUDENTS AND TO TRANSFORM THEIR LIVES."

Steve Folger, chair and program director of the Department of Physical Therapy Education, has connected with House through a common interest in science.

“He likes spreadsheets, which is good for me because I like spreadsheets too,” Folger said. “He has a big-picture view, and I think he stays pretty close to understanding different opinions for issues that come up within the university, and he’s been able to navigate that pretty well.”

Whether he is cheering on the Phoenix with his wife, Patricia Burgh House, or engaging with students, House leads a full schedule. He can also be spotted at student plays and other cultural events, said senior Kenneth Brown Jr., former SGA president. The provost once dressed up as the Phantom of the Opera in support of a performance.

“He’s pretty outgoing and wants to know the student experience,” Brown said. “He wants to talk to students, get to know what they’re hearing and what they’re thinking about.”

Sophomore Jonathan Stettler, SGA senator for the College of Arts and Sciences, is the main voice between his committee and the provost. He has worked closely with House on issues students care about, including open educational resources and promoting community service.

“He’s really open to having conversations with us, whether it’s a difficult conversation of ‘This might not be the best way to do this’ or ‘This probably isn’t realistic’ or going into helping us figure out what we need to do to implement something,” Stettler said.

The provost has dedicated much of his time to promoting campus-wide initiatives to advance the university, including the Elon Experiences. House said these experiences are considered to be “best practices” by U.S. News and World Report and Elon is the only institution in the nation to be listed as a “best practice” university in all eight of the journal’s academic categories. He credits Elon’s national recognition to this achievement.

“Now a lot of institutions know about Elon,” House said. “They know about Elon as the preeminent university for engaged and experiential learning, and they want to come and find out how we did this. I would say we moved from a fine institution that was primarily attracting students from the Northeast, but now we’ve become a national institution.”

But House’s involvement with the Core Curriculum didn’t stop there. He said he has spent the last 10 years trying to help students interconnect aspects from their Experiential Learning Requirements and their academic studies.

Amy Johnson, director of the Elon Core Curriculum and associate professor of history, said her coworkers just approved a new set of learning goals at their May meeting that may facilitate these meaningful connections.

“We’ve done similar work with COR 110 and Core Capstones and the first-year foundations,” Johnson said. “We’re certainly trying to think of ways to help students and the faculty and staff also understand what they’re getting as they move through the various areas of the core.”

House’s dedication to academic advancement brought a chapter of Phi Beta Kappa to campus, an honor society which is only offered at the top colleges of arts and sciences. He calls this one of his life’s greatest achievements, but the accreditation process was far from easy.

“It’s the kind of challenge that takes a long time,” House said. “My motto was, ‘The journey is as important as the goal.’ So each year we got closer and closer, and eventually, it took us nine years to earn a Phi Beta Kappa chapter. When they finally told us we had achieved it, it was joyous across campus.”

The provost said his second greatest achievement was developing the Elon College Fellows program, a four-year academic and professional program for students who have committed to a major in the arts and sciences.

Sophomore Maddie Dauenhauer said the program has given her research and social opportunities she may not have had otherwise.

“It’s the reason I came to Elon,” Dauenhauer said. “I live in the College Fellows Pavilion, so I’m constantly surrounded by College Fellows, which I love. The people I’m closest with are College Fellows, and I think that cohort has already shaped my college experience in a unique way.”

As provost, House was in charge of overseeing the strategic plan’s implementation and monitoring its success.

“I’m a scientist, so my data indicates that we’ve achieved 95.8% of the plan,” House said. “There are a couple of things that we didn’t do, but we’ve really done a good job, and we’ve celebrated those [achievements]. Now we’re in the next strategic planning process from 2020 to 2030, and that’s one of the reasons I’ve decided to step down, because I think the university needs a provost that will take the university through the next 10-year process.”

House is not fully retiring — in fall 2019, he will be stepping into the role of executive vice president full time under Connie Book, the current university president. He plans to work closely with the admissions and athletics department and said one of the tasks he is most excited for is simplifying the the budget in terms of salary allocation and doing the merit pay.

Though he said, “They don’t have to be exactly like me,” House hopes his successor will come equipped with energy and passion — someone willing to become the new storyteller of the university.

Brown hopes the incoming provost focuses on strengthening the university’s curriculum and offering equal access to a college education.

“We’ve looked at the demographics in seven years, and in seven years, there are going to be major changes in those demographics,” Brown said. “So many students of color — there are going to be less college-eligible students. Because people stopped having babies during the recession, fewer people will be able to go to college. It’s about thinking about education that’s not just for traditional students. I hope the provost can take an innovative look at what education can look like at Elon and how it can be proactive rather than being caught off guard by something that we knew was coming but just wanted to cross that bridge when we got there.”

House hopes to be remembered as someone who worked hard.

“I would say that Steven, Dr. House, the provost, helped us become the preeminent university in the country for engaged and experiential learning,” House said. “That would be a good legacy.”