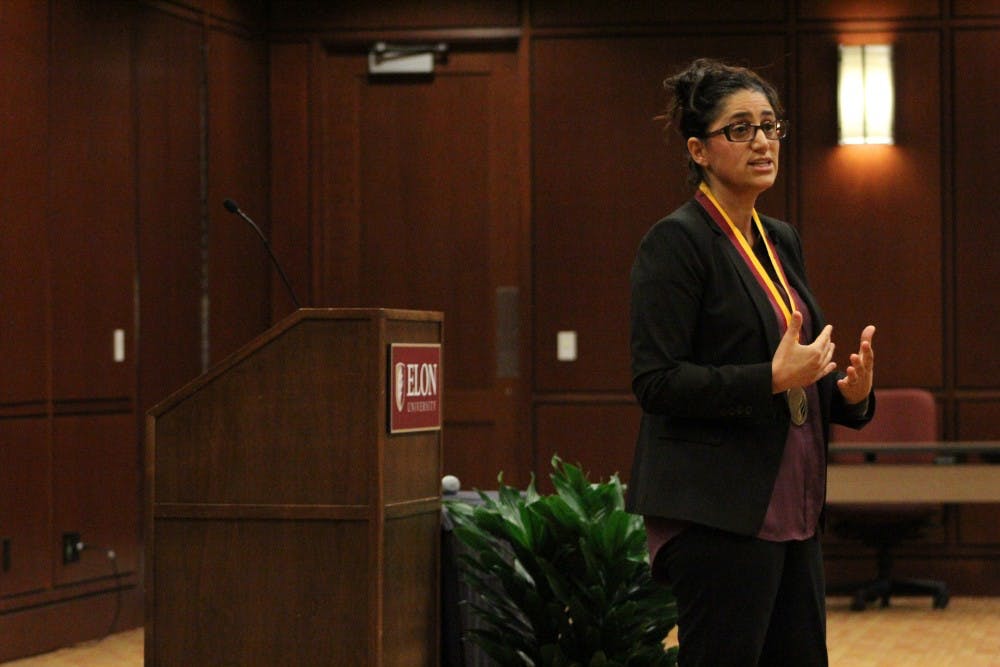 Dr. Mona Hanna-Attisha, the founding donor of The Flint Child Health and Development Fund, was honored with the Elon University Medal for Entrepreneurial Leadership for her activism. Attisha’s work led to the discovery of the Flint water crisis and helped start the initiative to replace lead pipes in the Michigan city.

The honor comes just one day after the city of Flint received the remaining $77.7 million in federal funding to fix their water infrastructure. The latest report released by the Michigan Department of Health and Human Services said the contaminated water has killed 12 people and sickened 90 in 2014 and 2015.

Hanna-Attisha was one of the Time 100’s Most Influential People in 2016. She shared what she learned about doing research on the effects of children drinking contaminated water.

Hanna-Attisha’s book “What the Eyes Don’t See: A Story of Crisis, Resistance, and Hope in an American City” was available to everyone attending the event. She told students persistence and resilience can go a long way.

“The reason that I’m here with you — and the reason why I wrote this book — is about those ripple effects,” Hanna-Attisha said. “Because it’s not so much a story about Flint, it’s about the deeper crises in our nation.”

University President Connie Book preceded Hanna-Attisha’s speech at the packed LaRose Digital Theatre. She said this award is presented to people who have persevered and are persistent.

“Even here at Elon, we tested our water,” Book said. “I know that was happening at cities all over the country because of the work [Dr. Attisha] were doing in Flint.”

Book also told Elon students to take Attisha’s story into consideration when they graduate from the university. She said getting an education is one thing, but using that education to change the world is another.

“We can't afford to have that education and stand ideally by,” Book said. “If we know something, it’s our responsibility to act.”

Hanna-Attisha said her research was based all in scientific facts, data and statistics, but the state of Michigan still denied that her conclusions were based in reality.

“It was hard to not second-guess yourself,” Hanna-Attisha said. “I was literally scared. My heart rate was up, and I felt like I wanted to throw up.”

Then she said her research began to resonate with the city of Flint, which has been home to numerous General Motors plants since the early 20th century. She said, then, her resilience began to pay off.

“Then I quickly realized this had nothing to do with me and everything to do with children, who, as a pediatrician, I have literally taken an oath to protect,” Hanna-Attisha said. “It was like my kids jumped out of my spreadsheets and lifted me up and gave me the courage to fight back.”

Below are the previous recipients of the Elon University Medal for Entrepreneurial Leadership: