Despite big contributions from seniors, Elon is unable to get past Saturday yet again 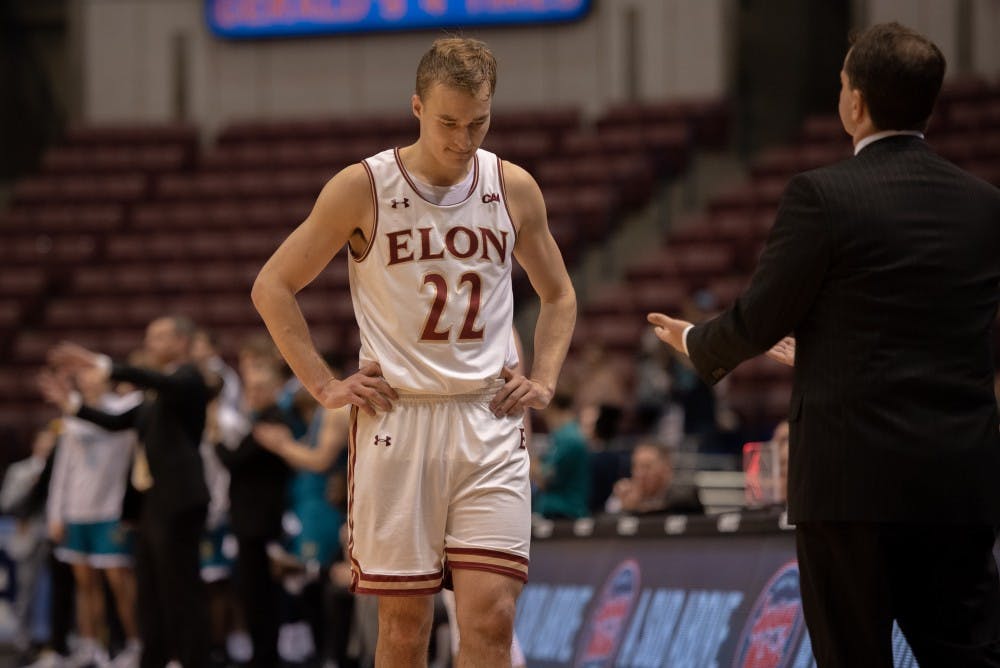 
Senior guard Steven Santa Ana emotionally checks out of his last game for Elon at the CAA Tournament in North Charleston, South Carolina, on March 9, 2019.

Elon University men’s basketball fell for the fourth straight year in the first round of the Colonial Athletic Association (CAA) Tournament in North Charleston, South Carolina. This year, it was at the hands of the University of North Carolina Wilmington 93-86.

The game was tight through the first 30 minutes, with Elon drawing the Seahawks back in to as small as a four-point margin with just over 10 minutes in the second half left to play. But Elon was unable to stop the Seahawks, who made more than 53 percent of their shots throughout the game and did so in crucial moments.

“I thought Wilmington played fearlessly and confident and aggressive,” said head coach Matt Matheny. “We were affected by foul trouble in the first half, and it affected our rotation.”

One of the major keys to Elon trying to advance past the first round was stopping UNCW senior forward Devontae Cacok, who is ranked second in the nation in rebounds and first in double-doubles. The Phoenix was able able to keep him fairly silent with 16 points and 12 rebounds, which is modest by his standards, but the Seahawks were able to incorporate other player into the mix to account for Cacok’s relatively low productivity night.

Besides Cacok, UNCW had five other players in double digits for scoring. One of those players was freshman guard Kai Towes, who dazzled with his creative passing and rapid ball movement. Towes finished with 10 points and a game-high six assists to boot.

“They’re a really strong offensive team,” said senior forward Tyler Seibring. “We knew we had to do our best to get them uncomfortable from the beginning, and they made some runs early. We tried to weather the storm late and make a comeback, but it just wasn’t enough.”

Senior guard Steven Santa Ana went out giving it all he had, leading all players in the contest with 26 points, adding four rebounds and three assists to his stat line. But the disappointment of the loss left him at a loss for words after the game.

Seibring, who was sensational in the team’s first win over UNCW this season, finished his last game with 14 points and seven rebounds. Though Seibring hung up his jersey for the last time after the game, he is focused on the memories he leaves behind even off the court.

“When we committed here, we committed to Elon, not just these four years,” Seibring said, speaking for his fellow seniors. “Our hope is that our legacy is something beyond this game and something we can share with our teammates and move the program forward.”

With just a few seconds left in the game, both Santa Ana and Seibring checked out of the game for one last time wearing maroon and gold and shared a moment with their head coach in front of the bench.

“There’s going to come a time when you turn around and hand the torch to the guys behind you,” Matheny said. “This year was not the year we hoped for record-wise, but in terms of passing the torch, these guys have carried the torch in the right way, in the Elon way.”

Senior guard Sheldon Eberhardt also finished off his career tonight with a 16-point, two-rebound, two-assist game. This comes just days after Eberhardt was named the Sixth Man of the Year in the CAA. He, along with the the rest of the players in the game that were honored with CAA Honors, were recognized before the game started.

Matheny will head home empty-handed for the fourth time in five tries following the CAA Tournament. The only win Matheny has had in the tournament was in Elon's inaugural season in the conference.