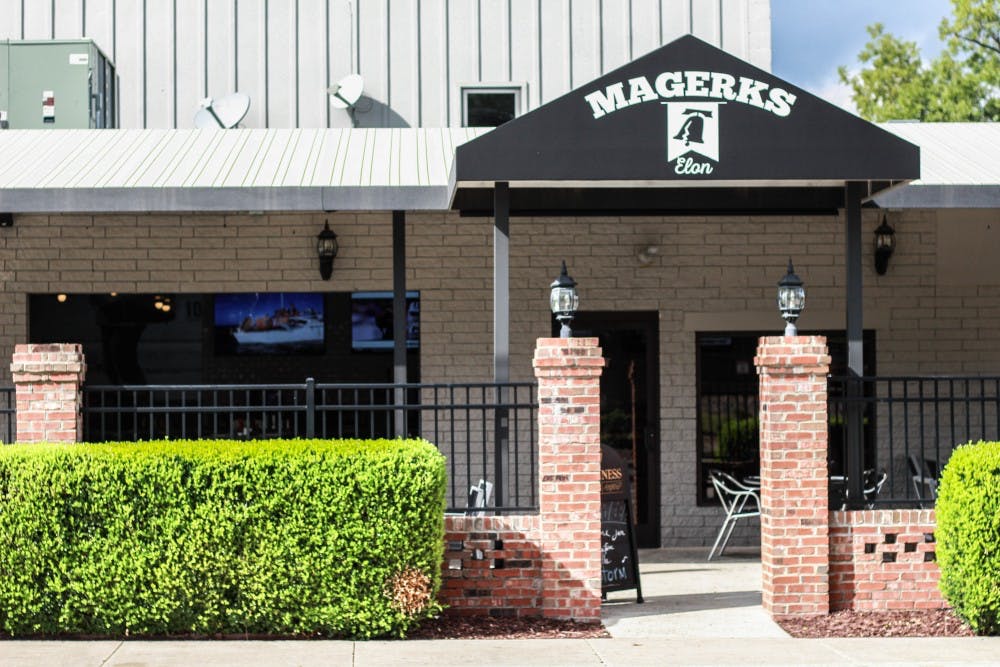 Kate Heck, manager of Elon's newest bar, drove 450 miles down the east coast to be a part of MaGerks Pub and Grill. Elon students don’t even have to leave campus.

The long-awaited MaGerks bar and restaurant opened its doors with a soft opening over the weekend, filling the space that West End Terrace left behind.

For months, students have wondered what business would take its place on the corner of West Lebanon Ave and North Holt Ave in downtown Elon, where many would spend Sunday brunch and Thursday evenings.

MaGerks has a full bar with over a dozen taps and serves “really good bar food,” according to Heck.

The restaurant has locations in Maryland and Pennsylvania, and Heck agreed to relocate from the latter and work in Elon because of her close relationship with the company.

“I loved it so much and it was a great growth opportunity for me,” Heck said. “I’ve always loved the vibe and I’m happy to be part of its inception.”

The interior is reminiscent of the space’s previous occupant, but with an added walk down memory lane. Though new to the Elon community, you wouldn’t know it when looking around inside. The walls are plastered in old Elon sport photos, serving as the backdrop for eight screens around the bar that show current tip-offs and touchdowns.

Alongside the bar is a large image of Elon’s old mascot, the Fighting Christian, a face that many current students may find unrecognizable. The mascot predates the current Phoenix by 18 years.

There’s both large indoor and outdoor seating available, but from the indoor dining room, there's a full view of the patio through the open garage door.

The menu will be fully stocked in the next couple of weeks and offers typical bar food – but with a twist. Founders John and Paul Dolaway sought to serve the best Philly Cheesesteak outside of Philly, according to their site. Several menu items feature the city’s famous cheese steak, including a staff favorite appetizer, Cheesesteak Egg Rolls.

Senior Lily Hamilton checked out Elon’s newest restaurant this weekend and ordered the nachos, another favorite among staff. She appreciated that they were able to accommodate her dietary restrictions and make them without meat. She also enjoyed the overall environment.

“MaGerks was super lively and fun,” Hamilton said. “It’s a laid back atmosphere with good food and beer. It was a great place to socialize and catch up with friends.”

Heck is optimistic for the restaurant’s success and knows the community has been anticipating its arrival.

“There’s a lot of buzz and excitement for the place, so I don’t think it’s going to be a problem getting people to come in and try us out,” Heck said. “We have a really positive, fun staff that likes to be here and good service, good drinks, friendly atmosphere.”

So far, there are no set plans for any special events.

“For right now, we’re sticking to what we know,” Heck said. “And as we learn the community we’ll learn how to serve the community best, and we’ll probably start doing that.”

Students will be making their way to MaGerks for the first time over the coming weeks to try a plate of nachos or one of their beers on tap. For Hamilton, she’s already looking forward to round two.