From pastor to runner: Elon professor juggles with the many facets of his life 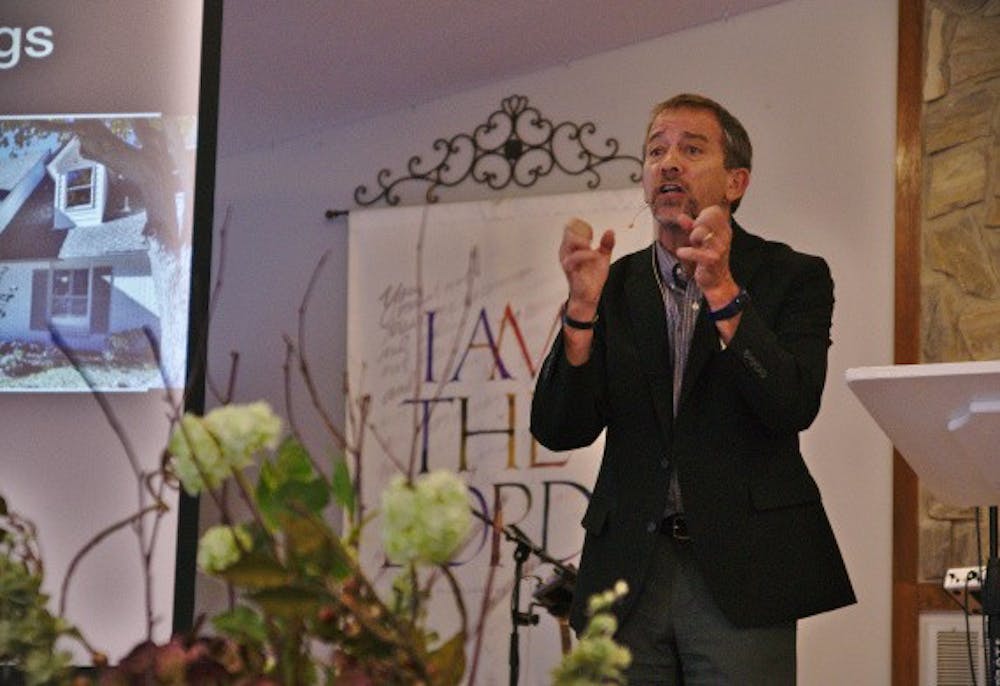 Faith in all aspects of life is important to Mark Fox, adjunct instructor in communications.

Fox grew up in Winston-Salem and became a Christian at 15 years old, sharing his newfound passion with his friends during lunch breaks at school. He invited them to his Bible study group, which grew from five to 60 members by the end of the year.

“That was my first taste of how God could use me in ministry,” Fox said.

He earned a Master of Divinity from Luther Rice College & Seminary and graduated in speech and communications rhetoric from the University of North Carolina at Chapel Hill in 1979, receiving his master's degree there two years later.

During his graduate studies, Fox met his now wife, who happened to live in the same apartment building. She brought him back on track after he had started drinking frequently and had stopped pursuing a relationship with Christ.

“Cindy was the real deal,” Fox said. “God used her to bring me back to the faith because I drifted in college.”

He followed Cindy to her church in Burlington, formerly known as Christ Church, where the pastor serving at the time made a deep impression on Fox. The pastor used illustrations to help people understand the Bible in a similar way that Jesus used parables.

“I’ve never heard anybody bring the Bible to life like he did,” Fox said.

At the time, Fox was selling ads at The Burlington Times-News while studying under the Christ Church pastor, Stephen Crotts. He saw that Fox had an aptitude for teaching and suggested that he start a ministry for young people. In 1983, Fox opened a coffee house called His Place that would host a Christian artist or a speaker every Saturday for children all over the county to attend.

In the three years that followed, Fox traveled around the country with his wife and two groups called New Direction and Damascus Road. He preached in all types of places — from churches to prisons, schools and streets.

“God was really giving me a desire to be a pastor in one place with a group of people that I could love and live with,” Fox said.

Antioch Community Church was born in the spring of 1987, and Fox is a pastor there today.

“Five families decided there was a need for a church in the area that would be mission-minded and committed to expository preaching,” Fox said.

Expository preaching is the practice of going through full books in the Bible, rather than preaching only on topics.

In 1993, Fox received permission from the Provost at Elon University for his church to meet at Whitley Auditorium every Sunday. Over 500 Elon students visited the church in the nine years it was on campus.

“It was easy for them to just get out of bed and walk over from the dorm,” Fox said.

Antioch received its own church building in 2002 on Powerline Road, right off of University Drive.

The main aim of Antioch is to keep families together, a goal that was born from the limited space in Whitley. Programs, such as Sunday school, that divide the family by age were not feasible in tight spaces like Whitley. So everyone attended the main service out of necessity.

However, this turned out to be a healthier environment for the church spiritually.

“The fathers and mothers saw, ‘You know what, it’s not the Sunday school teacher’s responsibility to train my children; it’s our responsibility,'” Fox said. “We began to see our folks really grow up and mature and get excited about the word and excited about reaching students.”

Apart from expository preaching and families worshiping together, mission trips are another integral part of the Antioch community.

Vic Costello, associate professor of communications, is an elder at Antioch and Fox's good friend. Both went on a mission trip to Colombia in 2013 where they built latrines for a developing island community with no local water supply for a week.

“It was different with seven kids,” Jesse Fox said. “It’s a different dynamic.”

Jesse said he never thought about his family dynamics much until he was separated from them as he grew older and left the house. But looking back, he said he was glad about his situation.

“It was like growing up in a house full of six friends,” Jesse said. “Depending on the week, just depending on who you hung out with.”

But living in the Fox house also meant growing up in a structured environment. Jesse said he would get up in the morning and have Bible study, be schooled and do chores around the house in the afternoon.

He and his siblings were homeschooled.

Fox once attended a conference that talked about the values behind homeschooling. Although there are academic reasons for homeschooling, Fox’s faith was the main reason for the couple to homeschool all seven of their children.

“We wanted them to be taught the values that we believe are important, which come from the Bible,” Fox said. “We did not want them to be in an environment where their primary influence would come from their peers or from people we didn’t know."

Fox said homeschooled children are sometimes viewed as unsociable, but looking back, he has no regrets choosing this path for his children.

“All of them are productive members of society,” Fox said. “They had lots of friends, they were involved in lots of activities outside the home, but we taught them what they needed to know.”

When his students or coworkers ask him for his opinions, Fox does not shy away from his beliefs. Tony Rose, senior business analyst at Elon, has been a longtime friend of Fox.

“Most people that know him wish they could be as consistent in their faith as he and his wife have been,” Rose said.

But when at Elon, Fox said he is first an adjunct professor in communications.

“I understand when I walk into the classroom, I’m there to teach public speaking,” Fox said. “I don’t go to preach or to lecture on things of faith.”

Students sometimes ask Fox if they can meet with him after class to continue discussions or listen to his opinions. He gladly invites these students to a cup of coffee at The Oak House or to lunch.

“I think it’s important for us as a university to be a place where we’re not afraid of honest dialogue and debate," Fox said. “I think we need to be willing to talk about difficult issues and look at both sides.”