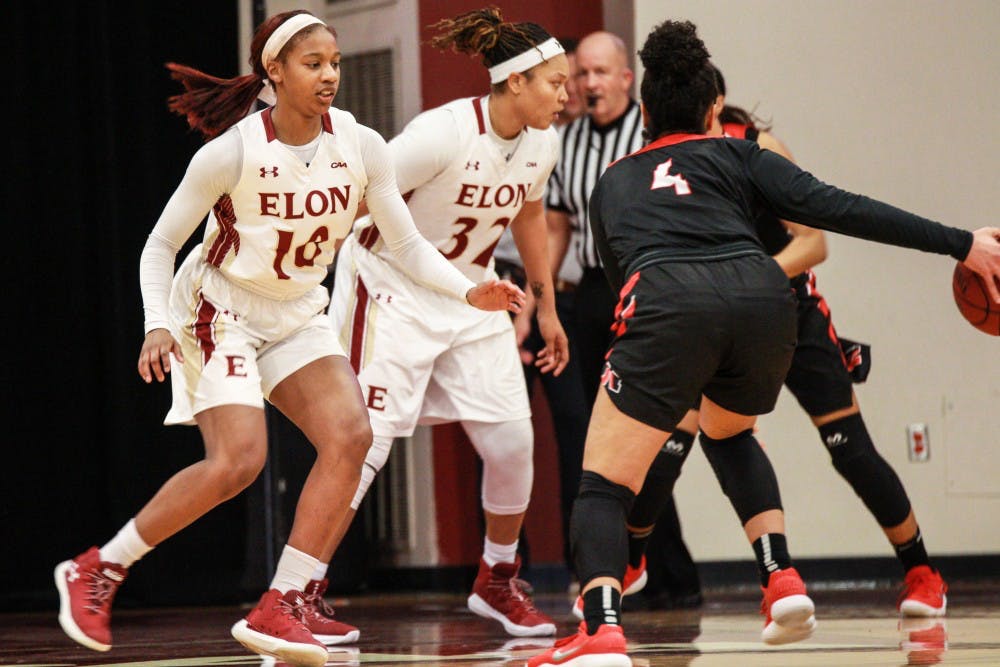 It was a cold day outside, but the Elon University women’s basketball team remained hot inside Alumni Gym during its matchup against the Northeastern University Huskies earlier today.

After moving past Northeastern 78-71, the Phoenix remains undefeated at home on the year and moves to 10-4 (2-1 in conference) this season.

It was a physical game as each team struggled with turnovers and fouls in the second half. In the third quarter, both teams had 10 fouls, sending multiple players to the line in a game which did not seem like it would ever find a pace.

“It just opens our eyes up and slowed things down,” senior center Malaya Johnson said. “We can’t control everything, but coach always says control what we can control, and turnovers and fouls are some things that we can control. Just being smart about things and taking care of the ball is just something we talk about, and when we aren’t doing that it does affect things pretty seriously.”

The Phoenix has won four of the last five matchups against the Huskies coming into today’s contest, but the average margin of victory is only 5.8 points. Today’s game was no different, as spectators witnessed 10 lead changes.

After falling to the University of Delaware on Friday, Jan. 5, head coach Charlotte Smith made some lineup changes that seem to have made a difference on the court against Northeastern.

“Just light a fire under people,” said Smith about why she made the changes. “To get a sense of urgency because every game matters in this league and we can’t be complacent, we can’t take everybody for granted and just trying to light a fire.”

“Like coach said, I feel like it lit a fire and kind of was a wake up call for all of us that, ya know, we have to be our best every day and so that’s what we’re definitely going to have to go through the rest of the season with and be our best to see results,” sophomore guard Lexi Mercer said.

Mercer finished the day with a career-high 13 points, including two three pointers in the fourth quarter. In the final minutes, Mercer found her fellow Phoenix with huge passes, setting up freshman forward Jaylin Powell and sophomore center Ra’Shika White down in the paint for two additional Elon baskets.

“Seeing the ball go in the basket," said Mercer about what got her going in the fourth quarter. "We started to get a flow going offensively and we started executing. We started to get on a roll and that’s when things started to work out in our way and like playing defense brought some energy to us when we got stops and we were able to execute on the offensive end.”

Elon connects on all four of its final field goal attempts to claim its second CAA win of the season and to move to 6-0 at home.

“It makes a great difference when you have that sixth man,” Smith said about playing inside Alumni Gym. “That extra energy, extra momentum makes a big difference – especially when you’re trying to make a push like we did in the fourth quarter.”

Up next, the Phoenix will travel to Harrisonburg, Virginia for a rematch of the CAA title game last year in which Elon came out victorious. That game is scheduled for Friday, Jan. 12 at 7 p.m.

“Our team needs to be consistent,” said Smith about the rest of the season. “We talked about it yesterday in practice how we can’t be a faucet, where its just off and on and off and on. We gotta stay on all the time against every opponent. You can’t take anybody for granted.”