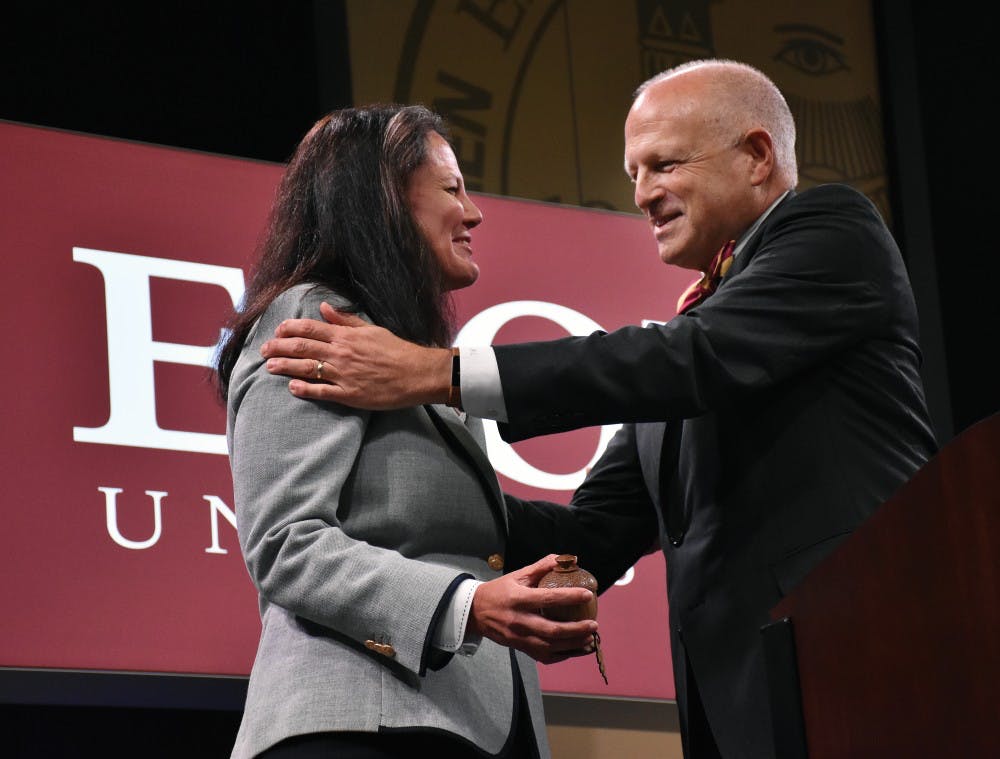 As Elon University awaits incoming President Connie Book to take office, the question arises about whether her expectant pay will mirror the corporate pay gap that has been developing in the United States for decades.

The corporate pay gap refers to the growing difference between the salary of a CEO of a corporation and the salary of the corporation’s entry-level employees. According to an Elon University assistant professor, who wished to remain anonymous, this issue has plagued the country for decades.

“I think it’s just consistent of what has happened in American society over the last 40 years where we’re so much more unequal than we used to be,” the professor said. “But I guess I’m not convinced that paying people in the top percent more actually delivers any benefits.”

The Chronicle of Higher Education is a news outlet primarily covering colleges, universities, secondary education and student affairs. Dan Bauman, a data reporter for The Chronicle since 2016 and has reported on university president salaries since 2014, said that though the pay gap at colleges and universities is similar to that of the gap in large corporations, it’s not the same.

“It may come across to people outside the higher education field to see some full-time professors making $100, 000 being upset by a college president making $700, 000,” Bauman said. “I wouldn’t say it’s to the level of the corporate side of things — there isn’t that kind of money floating around with colleges. No college is gonna have the ability to make somebody be a billionaire.”

Elon University declined to give Elon News Network an exact number of what Book’s expected salary when taking office on March 1. But according to the 2015 Elon University 990 form, current President Leo Lambert made nearly $600,000 that year. That number includes base compensation, other reportable compensation, retirement and other deferred compensation and nontaxable benefits.

This is in comparison to the $82,000 salary the average Elon faculty member made in 2015, according to the Elon factbook. As a nonprofit organization, the university is required to release a 990 form to the IRS annually in order to report their revenues and expenses and avoid paying federal taxes.

“It’s a tight labor market for professors and that’s a reason that professors don’t make a ton of money, because there’s not a ton of jobs,” the professor said. “Me, personally, I like my job here. I like working here. If I were to leave though, it would be for industry in the private sector where I would like my job less, but I would make so much more money. If my family situation were a little bit different than it might be more of a concern.”

Lambert’s most recent public salary is relatively low in comparison to other North Carolina private universities similar to Elon. According to their 2014 990 forms, High Point and Wake Forest, famously known for paying their presidents some of the highest salaries in the country, offer their presidents salaries of about $1.4 million and a bit over $1 million a year, respectively.

“I would think these schools aren’t spending their money well at that point,” the professor said. “If a president would determine whether they come to Elon or not based on if they make $500,000 or $600,000, then they should not be president.”

The widening gap between the president and entry-level professors has grown at Elon for years. In his first year as president, Lambert made just more than $200,000, marking a 172 percent increase over what would become almost a 20-year career.

According to Elon University institutional research, the average faculty member at Elon, including professors, instructors and lecturers, made about $47,000 annually in 1999, the same year Book began at Elon as an assistant professor. That’s about a 74 percent pay increase since 1999. The university declined to comment on this as well.

Bauman said what a president is paid implies how well a board of trustees thinks they are doing. When looking at salary, the first question everyone asks is, “Are they earning it?”

If Book accepted a salary from the board of trustees that was at least equal to Lambert’s, she’ll be getting a 259 percent raise. According to the South Carolina Department of Administration, Book made roughly $160,000 as Provost at The Citadel.

“If the president were to say, ‘I won’t be paid more than 10 times what the lowest professor is paid,’ then I just think that sends a powerful message of, ‘I care about everybody here — I’m not just trying to make the most amount of money as possible,’” the professor said. “At that level you should be here because you love the university and you care about it and sort of want to take care of it.”

With an expanding university — both in geography and in enrollment — the salary of the university president is expected to rise, and faculty members would expect their pay to grow at the same rate.

“If Elon is like other universities — there has just emerged more and more inequality among universities where senior administrators are making very good salaries now, but other people aren’t,” the professor said.

The university has not released the expected salary President Book would make after officially making the move into Maynard House, and that information likely won’t be made public until the university is required to file its 990 form for 2018. That information isn’t due to the IRS until May 15, 2019.