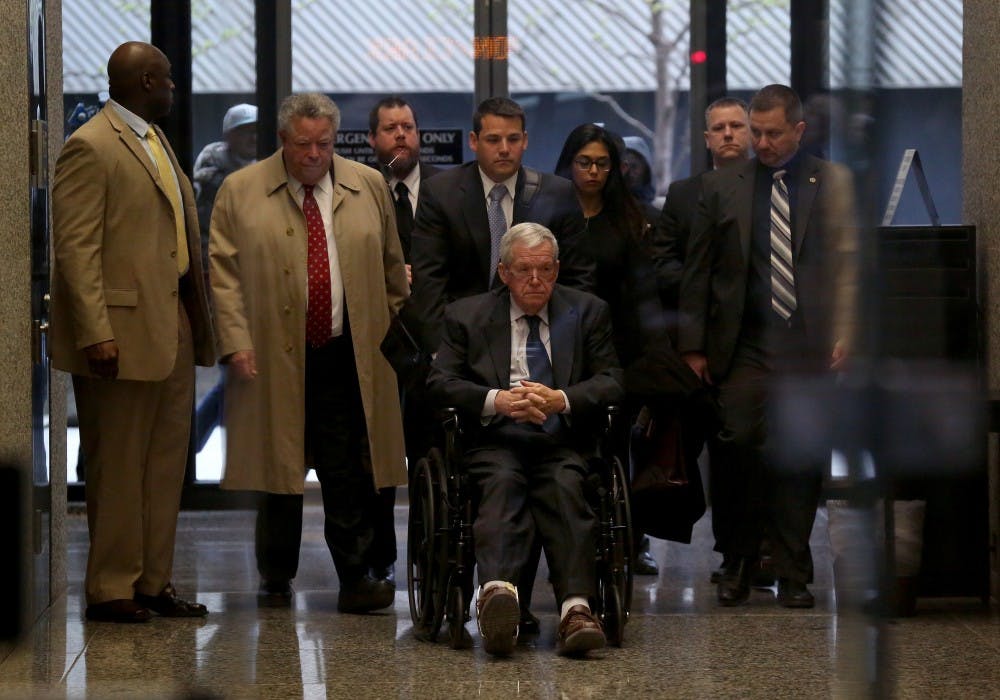 Former U.S. Speaker of the House Dennis Hastert was sentenced on April 27 to 15 months in federal prison, a $250,000 fine and two years of supervised release for a hush-money case involving the sexual abuse of teenage boys.

Hastert, 74, was known for being one of the United States' most powerful politicians and was the longest-serving Republican House Speaker in history. The Illinois native served as the 51st Speaker of the House of Representatives from 1999 to 2007.

Why was Hastert convicted?

When Hastert was a schoolteacher and wrestling coach at Yorkville High School in the late 1960s and 1970s, he was convicted of sexually abusing three teenage boys from his wrestling team.

In May 2015, it was discovered that Hastert made false statements to federal investigators and structured bank withdrawals to help escape bank reporting requirements.

While prosecutors said the money was covering something up, there were only some public accusations claiming Hastert had sexually abused three male students decades back. In October 2015, Hastert reached a plea agreement with the prosecutors and escaped with a single charge. When court submissions were filed this April, federal prosecutors accused Hastert of sexual misconduct.

Another hearing was then scheduled, and Hastert pleaded guilty to breaking a federal banking law while trying to pay someone off to help cover up sexual abuse.

Who was involved in the sentencing?

One of the victims, Scott Cross, testified against Hastert in court. When questioned by U.S. District Court Judge Thomas Durkin, who called Hastert a serial sex abuser, Hastert apologized for his crimes and accepted his sentence.

Hastert said he was “deeply ashamed” to be in standing in front of the court and believes his time as a wrestling coach was one of the darkest periods of his life. Judge Durkin said that had it not been for his age and poor health, the sentence Hastert received would have been longer. Hastert was also sentenced to attending a treatment program for sexual offenders.

What is Cross's story?

Cross was a 17-year-old senior in high school when Hastert molested him. Cross is now a 53-year-old successful businessman in Chicago. Hastert's sentencing marked the first time Cross spoke publicly about what happened.

He told the court that he had stayed late one night after school to try and make weight for wrestling when Hastert molested him. Cross’ brother, Tom, was a former Illinois politician and longtime supporter of Hastert. But when Scott Cross reached out to his brother for support in the hearing, Tom Cross issued a statement explaining he was proud of his brother and wanted to ensure that justice was done.

What happened to the other victims?

Steve Reinboldt was another victim of Hastert’s abuse. His sister, Jolene Burdge, had been trying for years to bring attention to the fact that Hastert sexually abused her brother, who is now deceased. She spoke in court against Hastert, telling him that she hoped she was his worst nightmare.

Illinois Attorney General Lisa Madigan is now asking state legislators across the nation to eliminate the statute of limitations for child sex crimes in response to Hastert's sentencing. The third victim of Hastert’s abuse, who was paid off, was not named publicly. On April 25, the unnamed victim sued Hastert for $1.8 million, claiming he had not received his full compensation.

The Elon men’s basketball team advanced to the Colonial Athletic Association tournament semifinals for the second straight season after beating top seed James Madison University in a 72-71 quarterfinal win. The Phoenix, seeded eight in the conference tournament, now move to a 9-8 record on the season, as James Madison, the one seed, drops to 13-7.

Elon University’s proposed amendment to the 2021 Annual Alamance County Mutual Aid Agreement between local law enforcement groups was rejected by those agencies, leading the university to use “direct communication” regarding aid requests instead. House said the committee decided that communication with law enforcement agencies regarding mutual aid requests is how the university will address issues within the agreement.