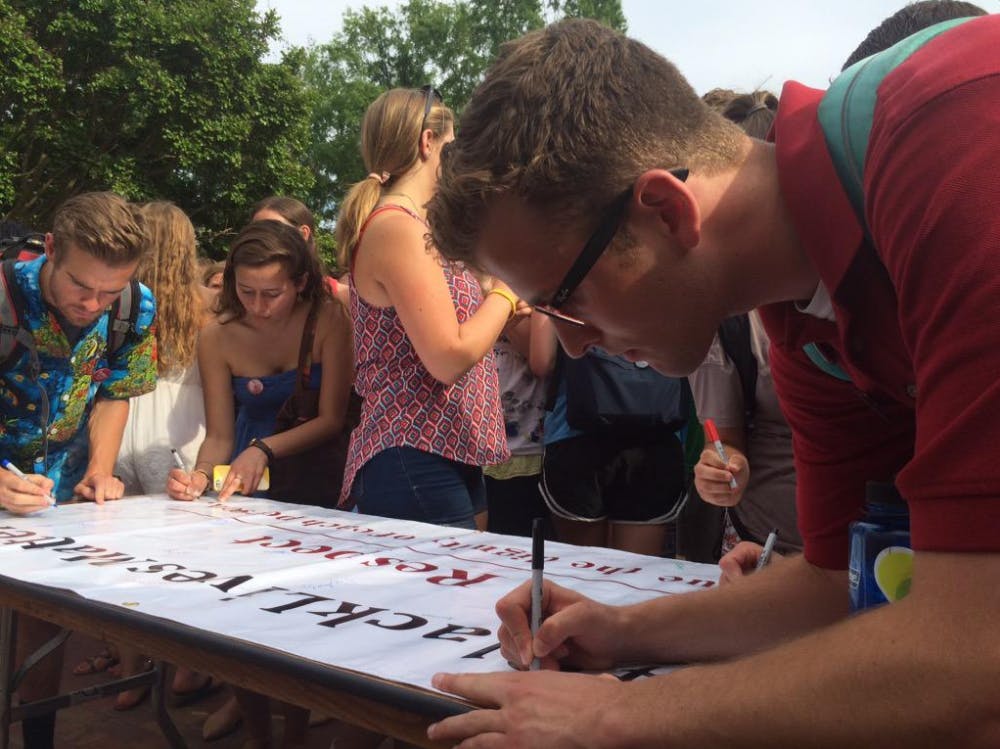 A conversation on race, bias and privilege started Tuesday and those in the dialogue hope it will last throughout the years.

"We need to get involved. We need to speak up," said Avery Steadman, Student Government Association President.

The theme of the speech seemed to be involvement.

Hundreds of students, faculty and staff gathered on the front lawn of Elon's student center speaking out on racial equality and campus discrimination. The Center for Race, Ethnicity & Diversity Education, or the CREDE, made a determined call to action and they made no apologies for their language. Symbolizing the language used behind their backs, the students wore t-shirts with the words "My Black Is Solid" printed on the front and taped signs with the n-word printed in bold on the back. After several minutes, they threw the signs to the ground embracing the overwhelming frustration with the vocabulary used around campus and the nation.The students also held signs with remarks such as, "Do I look suspicious?" and "I should NOT have to fear for my safety."

Speakers representing SGA, Greek life, the CREDE and the Elon student community demanded everyone to get involved in this dialogue. Administration, staff and students were encouraged to work to stand up to hateful speech by talking about race and diversifying social circles. Speakers embraced feeling uncomfortable, as it might be the only way to a solution.

First-year student, Kaelyn Green, a member of the university's dance team, spoke of her own discomfort and experience with racial slurs. "Elon is the first place where I've ever felt so separated," she said. "There are no words to describe how I felt to have someone say that to me."

President Leo Lambert's speech focused on the student body and its ever-changing nature. With 1,500 students coming each fall, Lambert called the students gathered around him to be "the most powerful shapers of the campus climate," and challenged them to show the incoming class how inclusive Elon can be.

This rally followed vigils held in honor of the riots in Baltimore, Maryland and the racial slur incidents that have occurred on campus throughout the year.

First-year Student Body President, Giles Roll, acknowledged these events in his speech, "Yes, this should've happened earlier," he said. "Yes, there were other events like this one that received less publicity."

The rally ended with attendees signing a #BlackLivesMatter banner as their pledge to "value the dignity of each person" and live the Honor Code's value of RESPECT.