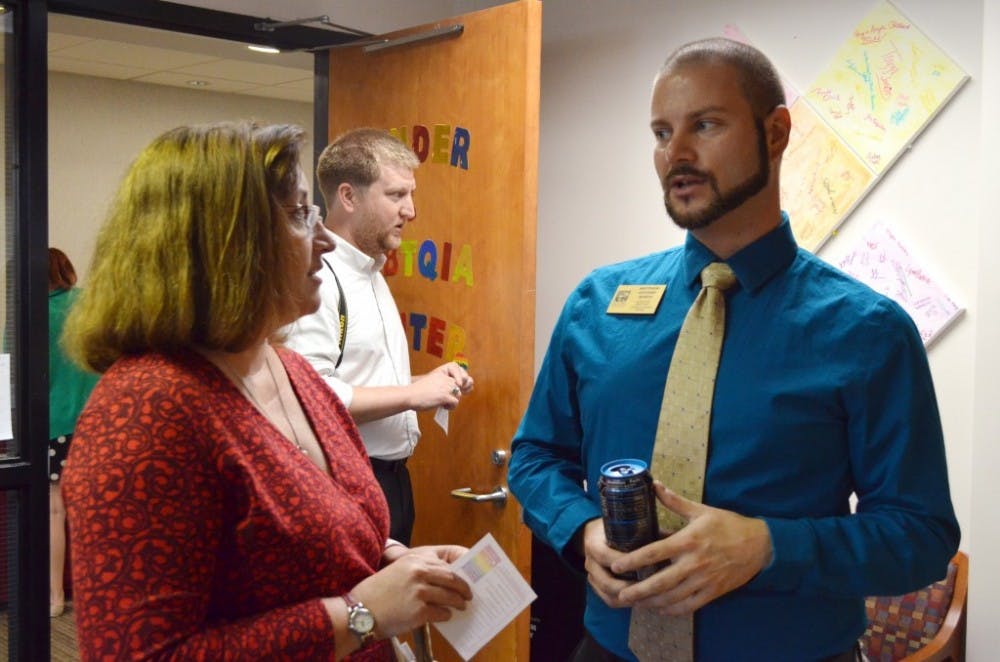 Beginning this month and for the first time, applicants to Elon University will be given the option to identify themselves as part of the LGBTQIA community on the admissions application.

The decision to ask Elon hopefuls an optional question about sexual orientation and gender identity is part of an effort to create an atmosphere of inclusion on campus before students arrive at Elon, said Matthew Antonio Bosch, director of the Gender and LGBTQIA Center.

“We’ve created an institutional center, where people feel they belong, and that belonging now starts from the first moment of inquiring about the application process,” Bosch said.

Elon and Duke University are the first schools in North Carolina to inquire about sexual orientation and gender identity on the admissions application. Duke announced plans to include a supplemental essay question on the Common Application encouraging applicants to write about their cultural backgrounds, including the words sexual orientation and gender identity, earlier this month.

Elmhurst College in Illinois was the first college to specifically inquire about sexual orientation and gender identity on the application in 2011, but the University of Pennsylvania began reaching out to applicants who indicated they might identify as part of the LGBTQIA community in their application essays a year earlier in 2010.

College applications traditionally ask candidates to share cultural, religious and racial identity with admissions faculty and staff, but Elon will be the seventh school in the United States to ask about sexual orientation and gender identity.

“People can check boxes for faith identity and race identity,” Bosch said. “This is an area of diversity we should reflect in our application.”

This addition to the application has occurred within a year of Elon’s construction of a new Gender and LGBTQIA Center as well as a new Multicultural Center on Moseley’s second floor. Bosch said these updates make it clear that Elon is distributing resources where they need to be.

Some students wonder if the implementation of the new admissions policy will negatively affect those who don’t answer or identify as straight on their application.

For freshman Josh Plonski, adding the question about gender identity was a good idea, but he harbors reservations about possible affirmative action-related effects.

“It’s really just a mater of if it becomes an affirmative action type thing,” Plonski said. “People already sort of have an opportunity to write talk about sexual orientation on the application.”

But Greg Zaiser, vice president of admissions and financial planning, said the admissions process will be unaffected by this additional piece of information. Whatever type of diversity prospective students bring to the table, they must demonstrate potential for academic success at Elon, he said.

Zaiser added this action is directly in line with Elon’s strategic plan, which outlines the top institutional priorities.  In 2014, those priorities involve inclusivity and global engagement.

“When the strategic plan was launched, most people knew that the No. 1 priority is an unprecedented commitment to diversity and global engagement,” Zaiser said. “If we are going to be what we believe we should be — an inclusive community — we need to recognize that people bring different rich perspectives to campus.”

The decision to add a question about sexual orientation and gender identity to the application required months of planning and research on behalf of the LGBTQIA Presidential Task Force, a temporary group of 14 faculty, staff and student representatives who worked for one year to improve inclusivity of the LGBTQIA community at Elon.

And earlier this fall, Elon’s GLC received official praise from President Obama and the White House for their efforts.

When members of the task force were asked what an inclusive community should look like, several pointed out the admissions process as a flaw because it lacked the option to provide sexual orientation and gender identity information.

“At that time, we wanted to know what the purpose of asking was,” Zaiser said. “ It was time to do it. Since we are an inclusive community, we should be able to feel comfortable asking this type of question.”

Campus Pride, an organization that ranks colleges and universities on how they accommodate the needs of LGBTQIA students, reflects Elon’s growth in this area.  In 2012, Campus Pride gave Elon two out of five stars and an overall score of 37 percent. In 2014, Elon was awarded 4.5 stars and a score of 83 percent.

In the planning process, the task force grappled with how to make applicants who weren’t “out” feel comfortable with the question without pressuring them to indicate one way or another.

“Not everyone who identifies with the community feels comfortable saying they do. That’s why it’s optional,” Zaiser said.

Claire Lockard, a student representative on the LGBTQIA Presidential Task Force and president of Spectrum, Elon’s student-run queer-straight alliance, said the issue was less about whether Elon should ask about sexual orientation and gender identity on the application but how they should ask.

“There were arguments about how to do it best,” Lockard, a junior, said. “A lot of high school students may not be out to themselves or to their families, so the way we asked it is a good way to reach out and offer support.”

Some Elon students have indicated support for the decision, on the terms that the question will be optional.

“I think Elon is a very open campus, and we need to know those demographics,” said freshman Brittney Nash. “If it [were] mandatory, I think I would have more of a problem with it.”