Gender-inclusive housing on the national rise 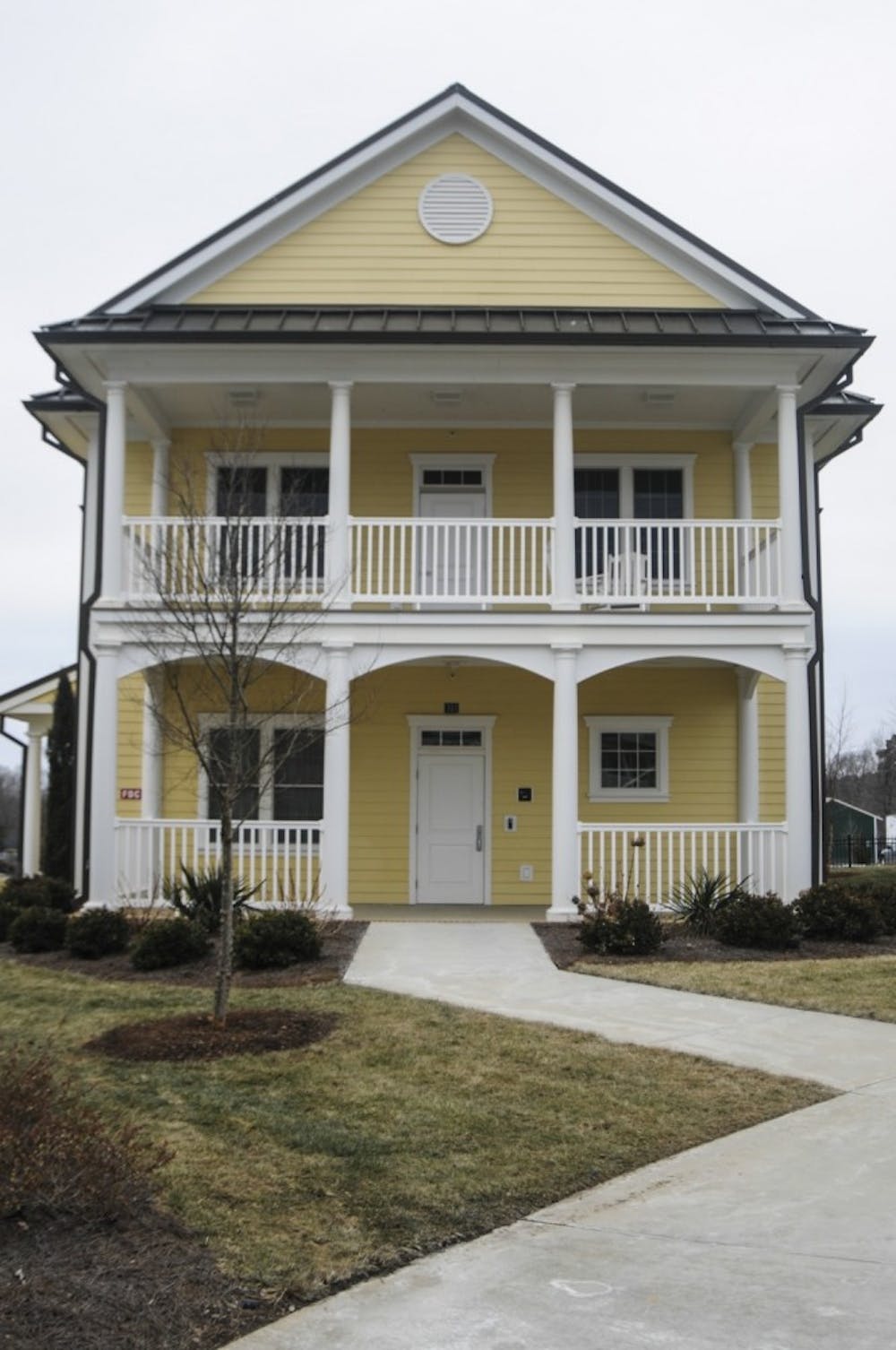 The townhouse-style homes of Mill Point are divided into four separate apartments inside. Photo by Caroline Olney, photo editor.

For many North Carolina students who don’t conform to socially-constructed gender norms, gender-inclusive housing on college campuses is a big deal. An increasing number of universities, including Elon University, offer options that allow students identifying with any gender to live together.

Nearly 100 colleges and universities nationwide offer some form of gender-inclusive housing to students. Proponents of this type of housing argue that it offers comfortable living scenarios for LGBTQ students because the option does not force them to live with students of specific gender identities.

“It shows that schools make a commitment to make sure that students are safe,” said Kevin Claybren, student coordinator of the Gender Non-Specific Housing Coalition at University of North Carolina at Chapel Hill (UNC-CH).

Freshman Becca Nipper, a student worker at Elon’s Gender & LBGTQIA Center, said these offerings show a lack of trust in underclassmen and that gender-inclusive housing will help first and second-year students avoid harassment. According to Nipper, many Elon students are frustrated that the university initiated gender-inclusive housing more than a year ago but still has not added other on-campus spaces and incorporated students from all class years.

“Most of the students I know [wonder] why it’s taking so long,” Nipper said. “Having to wait for permission is a little bizarre for us.”

MarQuita Barker, Elon’s associate director of residence life for operations and management, said the university introduced gender-inclusive housing at the Station at Mill Point to see how it would function with upperclassmen. According to Barker, there have been discussions about extending it to students of all years.

“I always thought you have to start small when you have a new initiative,” Barker said.

According to Barker, if Elon’s gender-inclusive housing expands to students of all years, it would be offered in apartment or suite-style residence halls where students can’t share bedrooms.

That’s the case for Elon’s proposed Gender and Sexuality Living-Learning Community, a gender-inclusive housing option available next fall. The community will be in the suites of Colonnades A, and community members will be able to participate in group activities that connect to the university’s Women & Gender Studies program.

“I’m glad that we’re moving forward and that we can expand [gender-inclusive housing] to other areas,” Barker said.

Months after the decision, Claybren said he is still disheartened.

“I think it was more about politics than students,” Claybren said. “They didn’t take into account students’ lives.”

The News and Observer reported that the Board of Governors was overhauled in 2013 to ensure an overwhelming Republican majority. Under the new policy, students of opposite sex can live together at UNC-CH only if they are legally married, siblings or have a parent-child relationship, according to The Daily Tar Heel.

The Board of Governors decision struck down UNC-CH’s proposal to offer 32 gender-inclusive spaces, starting at the beginning of the 2013-2014 school year. Claybren helped  introduce the pilot program after conducting research and gathering student signatures in support of the option.

Rick Bradley, associate director of the office of housing and residential education at UNC-CH, worked with Claybren and other students to educate members of the university’s Board of Trustees on the components of the proposal, and it passed with a unanimous vote in 2012 before reaching the UNC Board of Governors.

In a study, the LGBTQ Center at UNC-CH found that almost 25 percent of survey respondents said they experienced on-campus harassment due to sexual orientation, gender expression, gender identity or taking a class related to those topics. Nearly 12 percent of that group indicated they were harassed in residence halls.

Bradley said some of the incidents were not reported to his office, but he has heard complaints from LGBTQ students who were afraid to return to their residence halls after being threatened. According to Bradley, the ban on gender-inclusive housing affects how some prospective students perceive the institution.

“The message it sends is that [students are] not really welcome based on how [they] identify with their genders,” Bradley said. “One student contacted me directly saying that he decided not to enroll.”

“This could literally make a life-or-death difference for kids who are struggling with their sexual orientation or gender identity and want to have a safe space they can call home while they are on campus,” Campbell said in a statement. “This move has stripped away an important tool university administrators had to protect their LGBT students.”

But other North Carolina citizens have positive views about the ban on gender-inclusive housing in the UNC system.

After the policy was implemented, Tami Fitzgerald, director of the NC Values Coalition, showed support.

“With this uniform policy, our public universities and colleges can get back to the business of educating our students and preparing them to be productive members of our society, instead of promoting co-habitation among students of the opposite sex,” Fitzgerald said in a statement. “Most taxpayers in North Carolina, and certainly most parents, do not desire to send their children to colleges and universities where they can decide to live with students of the opposite sex without their input.”

Some student groups at North Carolina institutions are working to educate people about gender-inclusive housing.

Nipper agreed that it is sometimes difficult to find support from people in the South but encouraged students to join the discussion about the issue.

“Students have a lot of input here at Elon, and that’s one advantage,” Nipper said. “I think it’s important for students to speak their voices, whether for or against [gender-inclusive housing]. Students need to realize that it makes other people comfortable.”

Student involvement was important in the initiation of gender-inclusive housing at Duke University, according to Joe Gonzalez, dean for residential life at the university. On Jan. 13, The Chronicle, Duke’s student newspaper, reported that the university plans to expand its gender-inclusive housing, making it an option for students of all class years starting this fall.

“I hope it sends the message that we’re firmly committed to including everyone in our residence community,” Gonzalez said.

Using a phase-in method, Duke introduced gender-inclusive housing on the upperclassmen-dominated Central Campus and then later added West Campus, followed by its proposal for East Campus.

“I think it was a wise approach because integrating on a small scale allowed us to see any issues and correct them before moving forward,” Gonzalez said.

Meanwhile, Bradley said that his office at UNC-CH will continue to promote a welcoming environment in the wake of the Board of Governors ruling. According to Bradley, the university could partner with other schools within the UNC system to influence the state’s decision-makers, but student efforts will make the most difference.

“I think the success of this eventually-and it will come eventually-will be from the students,” Bradley said.

Claybren expressed hopes that UNC-CH, like its peer institutions, will adopt gender-inclusive housing in the future.

“Nowadays, it’s necessary,” Claybren said. “I don’t think a university can call itself inclusive or diverse without it.”