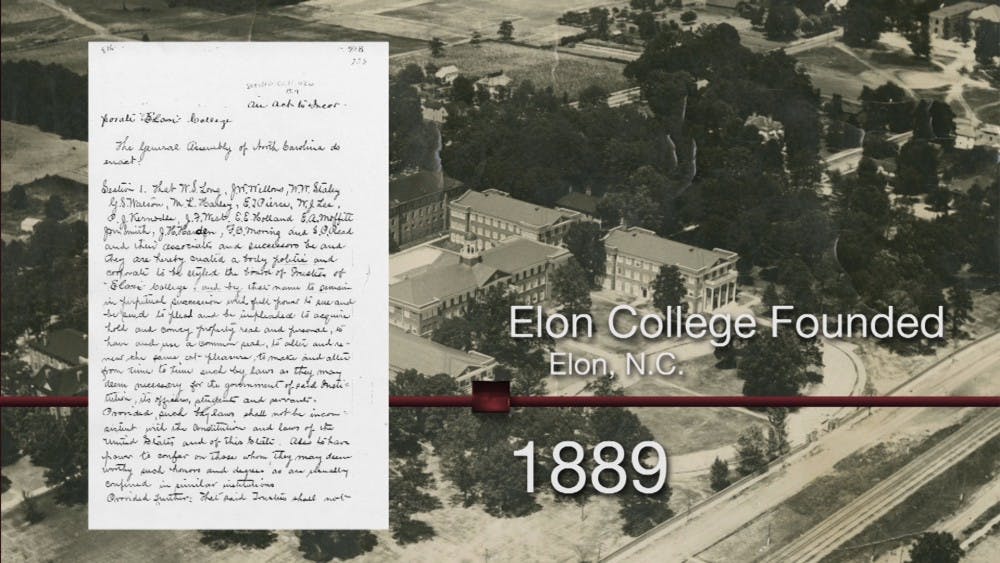 Elon University may be considered a small school, but its history is rich.

It began as a small college with only two buildings on campus and has now grown to include five schools, 620 acres and more than 5,500 undergraduate students. Here's a look at Elon's timeline.

More than a century ago the Town of Elon and the university did not exist, but one group's dream of creating a liberal arts college quickly became a reality.

The Southern Christian Conference wanted to build a school in Graham, North Carolina. They found a small wooded area filled with oak trees nearby, and in 1889 a new school was born under the oaks--Elon College.

Many changes came to the college over the next few years. In 1894, William Staley became the second president of Elon College, and the turn of the century welcomed Elon's first intercollegiate sport, baseball.

But fewer than 10 years later, Emmett Moffitt was named the third president of the college. His presidency brought heat, electricity, running water and indoor plumbing to the school.

William Harper then became the fourth president in 1911, but by 1918 enrollment began to fall--from 46 students in the senior class to 30 as men joined the army, and a flu epidemic swept through campus.

The hardships did not end there. In 1923, a fire nearly destroyed the entire campus leaving President Harper with a tough decision. It was then that the Board of Trustees met to discuss the future of Elon.

Harper did not quit. Instead of closing the school, Elon rose from the ashes and developed a 100-year plan for the future. In 1925, the campus expanded, adding Whitley, Carlton, Duke, Mooney and Alamance to the college, thanks to President Harper.

In the 1930s Elon graduate Leon Smith became Elon's fifth president. President Smith worked with the government to help revive the school. He brought in 672 pilots to Elon to train on campus, and the government paid their tuition, a decision that brought financial stability back to the school.

Things began to look up in 1955 when enrollment exceed 1,000. After President Smith retired, one of Elon's most notable alumnus received a phone call that would change his life.

During Dr. Earl Danieley's time as president, the college saw many changes, including the integration of African-American students, and in 1963 Eugene Perry was the first African-American to graduate from Elon. Six years later, the study abroad program we know today began with Elon's first study abroad trip to England.

In 1973, Fred young was named the seventh president of Elon. During this time student organizations such as The Pendulum and WSOE started. After decades of hardship, Elon was finally thriving.

By the 1980s enrollment exceed 3,000, and that same decade, the Martha and Spencer Love School of Business became Elon's first individual school within the college.

In 1999, Dr. Leo Lambert became Elon's eight president, and a new president and millennium brought huge changes to the school. Belk Library opened, and the College of Arts and Sciences and the Schools of Education and Communication were established.

Finally, the school transitioned into the Elon we know today. In 2000, Elon went from a small college to a university.

With the new title came a new mascot, but this change came with many suggestions. But after a lot of discussion, there was only one mascot that truly fit, the Phoenix.