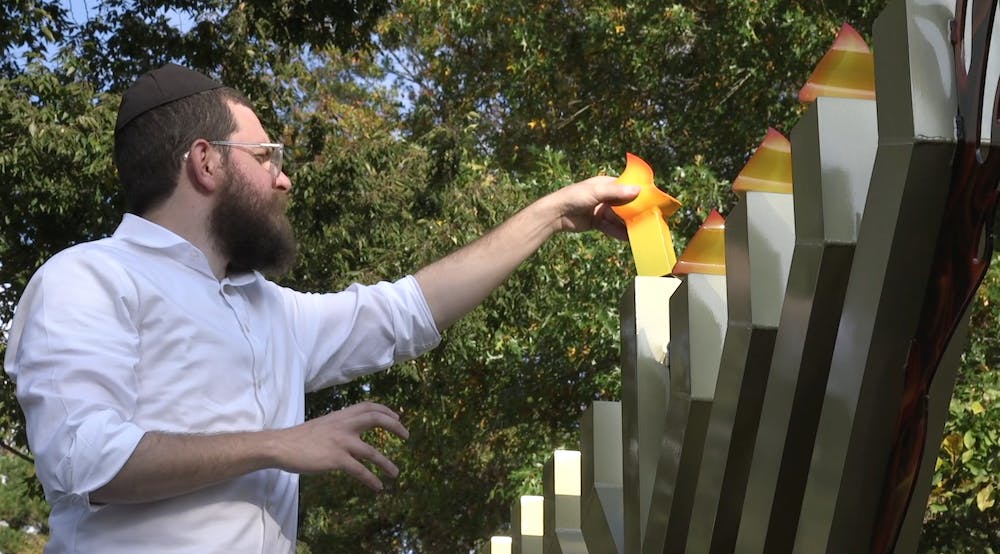 
Rabbi Mendy Minkowitz putting the finishing touches on the new menorah outside of the Chabad house in November 2020. Six months after the original menorah was taken down, a bigger and better one was made, giving closure to Mendy.

While menorah lightings have happened for several years at the Chabad Elon Jewish Student Center’s off-campus house at the menorah displayed year-round, the town of Elon will hold its first public menorah lighting at 5 p.m. Dec. 18 in the town center.

Rabbi Mendy Minkowitz said holding the celebration in a public square, with the town of Elon mayor Emily Sharpe in attendance and the representation of other faiths, makes this year’s occasion special.

“While it’s the first time here at Elon, it is not at all the first time in general,” Minkowitz said. “Many cities, states and even the White House have had a public menorah lighting on state grounds, on city grounds, on federal grounds. We’re joining a national trend that exists already for decades and that’s what’s so beautiful about it.”

Minkowitz said this year’s celebration is meaningful because of the vindication it represents.

In May 2020, the menorah outside of the Chabad house was torn down in an act of vandalism. As a result of this, Minkowitz said the town wanted to help repair the situation and the introduction of the ceremony this year helped to do that. .

This year’s formal ceremony is building on the display of a menorah in the town center both last year and in 2020.

“There were people who were intent on shutting us down, on silencing us and here we are as a result of their very action,” Minkowitz said. “We're actually prouder and louder and better represented than before. It's a personal victory for me.”

Chabad of Elon’s logo is a menorah — a luminary that creates and sheds light on its surroundings.

“We very much identify with that idea as that being our work and our mission is to make light and to shed light in a place that may otherwise be dark,” Minkowitz said. “At a place, I don’t mean geographically Elon, but a place meaning an environment that may otherwise be dark. Not only is that our mission at Chabad, but we very much identify that as being the role of man in general.”

At the Sunday ceremony, Sharpe will light the shamash candle — the auxiliary candle over the menorah used to light the other eight candles. In addition, the university’s Director of Jewish Life Betsy Polk will share words with the crowd and hot drinks, courtesy of The Oak House and doughnuts, a traditional Hanukkah food, will be provided.

“Rabbi Mendy has been an incredible advocate for the Jewish population in and around Elon,” Sharpe said.

Sharpe said the town believes people of all faiths should feel welcome.

“In a time when there is so much darkness in the world, any opportunity to celebrate light and love should be taken,” Sharpe said.

This year is a Hakhel year, which happens every seven years on the Jewish calendar. Minkowitz said the Hebrew word means to gather, making this ceremony all the more meaningful.

“Gatherings, in general, are always good when people come together, but in particular gatherings that are focused on how to make the world a better place, how to fulfill our life's purpose and how to make good on our talent and our capacities,” Minkowitz said. “We're very excited to be gathering during this year of gathering.”