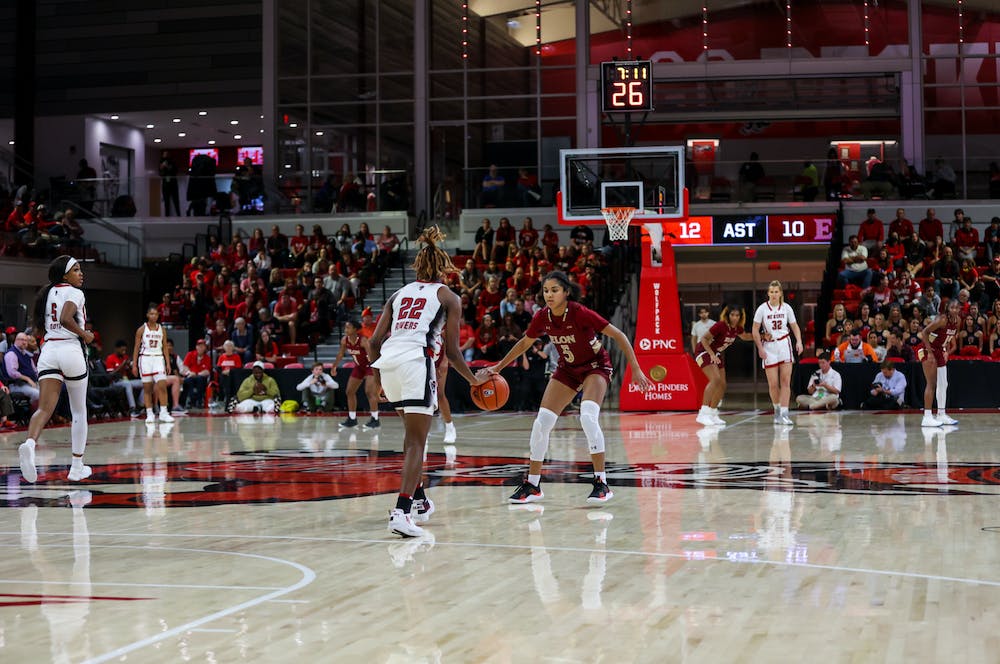 The Elon women’s basketball team played its second-straight Atlantic Coastal Conference opponent to begin the season on Thursday, losing to No. 10 North Carolina State 89-55. The team did not give up though, according to head coach Charlotte Smith, who said she was proud of her players’ effort these past two games.

“I felt like we did a really good job of competing for 40 minutes with a really great basketball team. Unfortunately, we are very young right now at this point, but I'm proud of our youth, and I'm proud of our fight,” Smith said.

One of Smith’s young stars is redshirt freshman Kamryn Doty, who leads the team at point guard. Doty said she has been waiting for her opportunity to step out onto the court for a while now.

“I've been preparing for this moment for a while. So just knowing that I put in the work and being able to actually apply it feels great,” Doty said.

Doty said the players came in knowing they were facing a tough opponent and wanted to leave everything they had out on the court. She did so in the third quarter, going 5-5 from the field and scoring all 11 of her points to try and cut Elon’s second-half deficit.

“We went into this game knowing that we really didn't have anything to lose. So we wanted to have fun, play hard. And I think we went out there and did that,” Doty said.

Elon’s biggest challenge today, according to Doty, was the ability to rebound and box out. After getting outrebounded 41-24 by the Wolfpack, Doty said the team will put in more effort going forward to grab rebounds on the defensive end in future games.

“Going on, we know that we needed to box out, we needed to rebound. And even though we won't be playing ACC teams as often, we still need to apply those same concepts,” Doty said.

Smith also said Elon’s defense needs to be more physical to be able to go up against teams like NC State.

“When you are going to get size, you have to neutralize it with physicality. And we did not display that physicality on the box outs, and we allowed them too many second chance opportunities,” Smith said.

Despite losing the game, Smith said being able to play these two ACC teams helped the Phoenix see its flaws. Smith said the team can use this going into its first home game against High Point on Nov. 13.

“It’s very helpful because it exposes your weaknesses and areas where you need to improve early on. And then it shows you when you have those moments and those sparks of greatness that you can compete with great teams,” Smith said